Has NASA accidentally found an Ancient Sumerian Statue on the...

Another extremely mysterious discovery has apparently just been made on the surface of the red planet. According to UFO hunters, what appears to be a head of a mysterious statue has been seen in one of the images captured by the Curiosity rover currently exploring the red planet.

Previously, NASA’s Curiosity rover and its companion on Mars, Opportunity have taken a number of really strange images on Mars. From seeing Domes on Mars to a statue and what appear to be entire structures buried under the surface of the red planet, we have seen countless mysterious images from our neighboring planet that defy explanation.

While many of the findings on Mars can be dismissed quite easily, there are some findings that defy every logical explanation. This is the case of the image we can see in this article, an image that apparently defies all explications and looks like an Ancient Sumerian Statue often seen in Ancient Mesopotamia on Earth.

In the mysterious image, Ufologists believe we can clearly make out the face of the statue, two eyes, a nose, a mouth and the typical cone-shaped beard we see in nearly all Ancient Sumerian Statues on our planet.

Ancient Astronaut theorists believe that the Anunnaki colonized both Mars and Earth, and this belief could possibly be backed up by the fact that the Sumerians had a number of myths about Mars, including that the Anunnaki colonized Mars and used the red planet as a “pit stop” for Earth. So if these “gods” that came from the heavens, actually did colonize Mars in the past, is there a possibility that we today may find evidence of structures on the Red Planet? Such as pyramids, columns, statues, etc..

If the Anunnaki were on Mars, it is inevitable that we today will find evidence of their civilization on the Red Planet. What we know for sure is that in almost every image sent back by NASA’s rovers exploring the red planet, a strange structure is identified. Some people might say that it’s in our nature to imagine shapes and forms, but there are just some images that have objects that no one can explain, one of them is the image seen in this article… 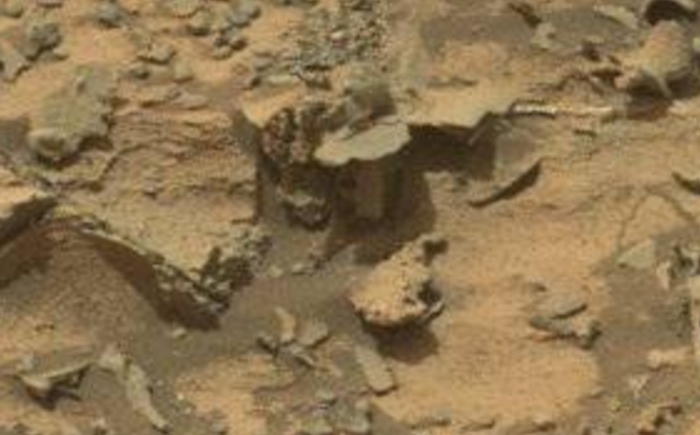 Researchers have identified multiple references in the cuneiform tablets that are believed to be the records of the mysterious Anunnaki and according to researchers, there is proof in those tablets that the Anunnaki have history on Mars.  According to the modern day translation of Sumerian and Babylonian origin myths, a cataclysmic event did, in fact, occur on the Red Planet, an event that sounds remarkably similar to ancient Mesoamerican myths about a feathered serpent that devastated Mars. A comet or asteroid crashed into the red planet and caused a catastrophic chain of events that turned Mars into an isolated and inhabitable world.

While many will remain skeptical about this discovery and many others that have been made on Mars, there is enough evidence to support the theory that Mars was habitable and inhabited in the distant past. The discovery of an ancient Martian atmosphere, liquid water flowing on the surface of Mars today, Methane spikes and biologically useful nitrogen all point to the possibility that Mars has a past that is mysteriously connected to life on Earth.