Traces of a lost civilization? Researchers find hundreds of mysterious...

Archaeologists have uncovered hundreds of enigmatic structures located in the Amazon, believed to have been built over 2,000 years ago. These mysterious structures have remained concealed for centuries by the Amazon and reveal that the Amazon isn’t as untouched as we believed in the past.

The fascinating ancient structures were most likely built by an unknown civilization.

The traditional idea many historians share is that before the arrival of Spanish and Portuguese in the fifteenth century, and unlike conventional history in the Andes, there weren’t any advanced civilizations in the Amazon region. But, given the fact how deforestation has revealed much of the hidden secrets of the area, scholars are confident that an advanced civilization inhabited the area in the distant past. The numerous aerial and satellite images are revealing, a complex network of structures, roads, and even possibly settlements that until now had remained hidden under the impenetrable layer of the Amazon.

These remarkable earthworks have been uncovered due to rapid deforestation which has allowed experts to uncover over 450 massive geoglyphs in the rainforest.

While their size and complexity has taken archaeologists by surprise, experts are still unsure as to what their exact purpose was, however some authors speculate that the massive enclosures may have been used sporadically as ritual gathering places. 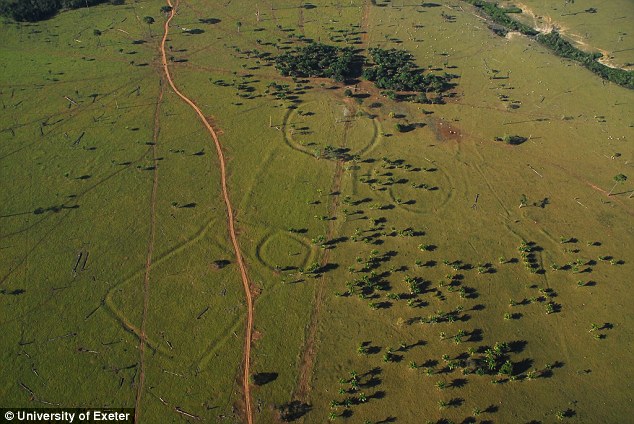 According to phys.org, the structures are unlikely to be villages as archaeologists have recovered very few artifacts during excavations. Furthermore, the layout of the structures suggests they weren’t defensive structures.

The massive structures—eerily similar to Stonehenge— occupy around 13,000 square kilometers in Acre, in the western Brazilian Amazon.

Scientists from the UK and Brazil have said that these structures prove the Amazon isn’t as untouched as we believed in the past.

“The fact that these sites lay hidden for centuries beneath mature rainforest really challenges the idea that Amazonian forests are ‘pristine ecosystems,” said Dr. Jennifer Watling, a post-doctoral researcher at the Museum of Archaeology and Ethnography, University of Sao Paulo.

“We immediately wanted to know whether the region was already forested when the geoglyphs were built, and to what extent people impacted the landscape to build these earthworks.”

Researchers have managed to ‘look into the past’ by reconstructing 6000 years of vegetation and fire history in the vicinity of two of the archaeological sites using state of the art methods, revealing HEAVY alterations by the ancient culture that inhabited the area.

Scientists say that the ancients modified the bamboo forests for millennia, constructing small temporary clearings in order to erect these mysterious structures.

Experts found that instead of burning large parts of the forest, the ancients were able to transform their environment by concentrating on economically valuable tree species such as palms, creating a kind of ‘prehistoric supermarket’ of useful forest products.

Dr. Watling said: “Despite the huge number and density of geoglyph sites in the region, we can be certain that Acre’s forests were never cleared as extensively, or for as long, as they have been in recent years.

“Our evidence that Amazonian forests have been managed by indigenous peoples long before European Contact should not be cited as justification for the destructive, unsustainable land-use practiced today. It should instead serve to highlight the ingenuity of past subsistence regimes that did not lead to forest degradation and the importance of indigenous knowledge for finding more sustainable land-use alternatives”.