Fire of the Gods, Mythological Weapons Of The Ancient Past

One of the most well-known stories in Greek Mythology is the legend of Prometheus. This powerful Titan ruled over the realm of fire, and in a defiant act passed his sacred knowledge onto humanity (despite Zeus’s orders to keep this knowledge forbidden). This combustible tool allowed our ancestors to survive the cold, bake clay vessels, and clear forests for planting. It literally helped humanity ascend from the stone age to a world of culture and technology.

But according to Hindu Mythology, this blazing gift went way beyond the primitive use of smelting metal and cooking meat. In the hands of the gods, fire was a profound and deadly tool, capable of incinerating enemies and leveling entire civilizations. 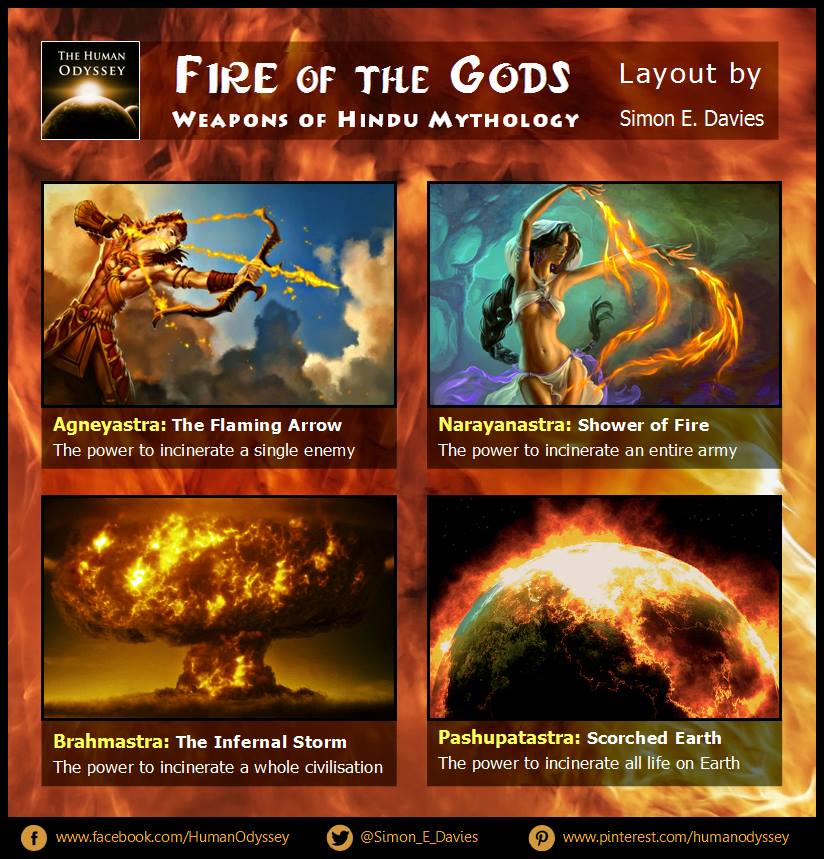 Agneyastra was one such weapon, created by the fire god Agni. It was described as a flaming arrow which required great knowledge and skill to work. Legend says the Agneyastra was used by the hero Sagara to set his enemies ablaze.

Another weapon, created by the God Vishnu, was the Narayanastra which fired a tirade of missiles upon its enemies. It was said the intensity of the fire increased the more an enemy resisted, and lessened when they showed their submission. In order to maintain a balance, this weapon could only be used once. If anyone tried to use it twice, it would devour the user and their supporting army.

The Brahmastra (forged by Lord Brahma) was one of the deadliest weapons in mythology. It required days of intense meditation to activate, and when fired, almost nothing could stop it. Upon impact, it created a powerful inferno capable of annihilating an entire nation. The weapon also created severe environmental damage (not dissimilar to radioactive fallout). Wherever the Brahmastra was dropped, the surrounding land would become barren of all life.

Finally, there was the deadliest weapon of all, the Pashupatastra. Both Shiva and Kali were said to have possessed this device, which was discharged by the power of thought. It was forbidden to be used against lesser enemies. This catastrophic weapon was said to be capable of destroying creation and vanquishing all life. The Hindu hero, Arjuna, obtained this weapon from Lord Shiva but did not use it as he was afraid he would destroy the world.

All of these powerful weapons sound uncannily familiar to the tools of mass destruction we have today. Perhaps the gods had a message for us. It is of no coincidence that Oppenheimer, creator of the atomic bomb used this quote from Hindu mythology “Now I am become death, the destroyer of worlds”. We live in an age where the fire of the Gods is now at our own disposal. Is it possible that there was a reason that Zeus forbade Prometheus from sharing this sacred knowledge? Can we truly be entrusted with the fire of the Gods?