Ancient Knowledge? The Secret Importance Behind The Number 3

Throughout human history, the number three has always had a unique significance, but why?

If we look back in history at ancient mankind, no matter which culture we observe the number three has always been present, and of extreme importance.

What is it about the number three that makes it so important that it is present in religion, architecture, mathematics and many other parts of humanity.

According to myth, the destiny of gods and man is controlled by all-powerful beings known as the Three Fates. Various cultures across the world have long shared a belief that the number three represents something sacred, mystical, universal and divine.

In the sixth century BC, Greek mathematician and philosopher Pythagoras introduced his famous theorem:  A squared + B squared = C squared. Pythagoras formula explains the mathematical relationship between the three sides of right triangles, and researchers worldwide believe it was originally based on the design of the Egyptian pyramids. according to research, Pythagoras studied with the ” great teachers of Egypt” and it is he who brought the knowledge and wisdom from Egypt to Greece, giving birth to Greek Philosophy.

The theorem of Pythagoras makes reference to a right-angled triangle such as that shown in Figure 1. The side opposite the right-angle is the longest side and is called the hypotenuse.

If we denote the lengths of the sides of the triangle as a, b and c, as shown, then area A = a², area B = b² and area C = c². So, using Pythagoras’ theorem we get the following:

For Pythagoras, and for a lot of ancient philosophers, mathematics was the way something supernatural could be explained. Many scientists and inventors, including Nikola Tesla, gave extreme importance to the number three. Pythagoras taught that everything in the universe has a three-part structure, he also stated that every problem in the universe could be reduced diagrammatically to a triangle and the number three.

To Pythagoras and his followers, the triangle represented ascension, and the triangle and number three, according to them is the key to all hidden mysteries in the universe. But Pythagoras was not the first to discover the importance of the number three. Pythagoras received the knowledge from the Egyptians, and they claimed that their knowledge came directly from the “Gods”, beings that did not come from Earth, so in this case, the Egyptians received this information by Extraterrestrial beings –  “Gods”.

Pythagoras is really the first one to spread this knowledge outside of Egypt, and basically, begin to speak to the world about what it is, a sacred or divine knowledge that came from the “Gods”.  It is a fact that the Pythagorean triangle may contain wisdom that we still haven’t understood in terms of how physical – terrestrial geometry can connect to otherworldly domains that possibly coexist with our own.

Check out this PDF file that explains a lot about the Pythagoras theorem.

In 1966 scientists announced the greatest breakthrough in of science. they successfully deciphered the Genetic Code. After years of research, scientists discovered that the structure of the DNA consists in a series of three molecule combinations known as triplets. The genetic code consists of three-letter ‘words’ called codons formed from a sequence of three nucleotides (e.g. ACT, CAG, TTT). This makes the number three very important as you can say that it represents the key to our existence, the key to understanding the complex DNA language.

DNA is a nucleic acid; alongside proteins and carbohydrates, nucleic acids compose the three major macromolecules essential for all known forms of life. 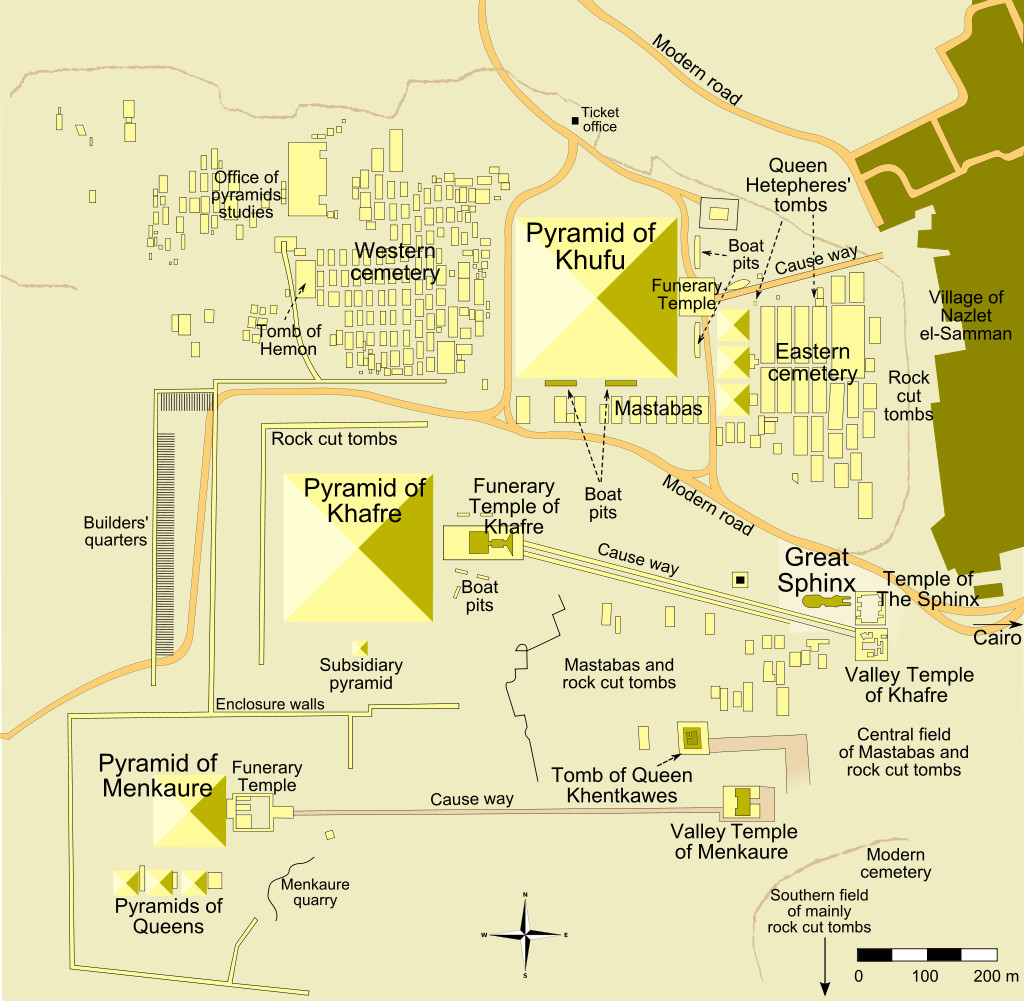 Constructed more than 4,000 years ago these monuments are arguably the most recognizable in the world and they employ the most magnificent use of triangle in architecture, the simplest most “perfect” geometric form. The Ancient Egyptian civilization is perhaps one of the first civilizations on earth to have used geometry, math, and architecture and combined them in a specific and elaborate way. This combination allowed them to construct monuments that archaeology and science have trouble explaining.

The triangle is one of those basic archetypal shapes that perhaps is hardwired into the human consciousness, and this may find expression in monuments such as the pyramids.

The secret code of the number three and alchemy

One of the most influential scientists of the 17th century was Isaac Newton. Newton introduced what became the basis of all modern physics: the three laws of motion, but what many people don’t know is the fact that Isaac Newton was an extremely mystic person and extremely interested in alchemy. Found among his documents about philosophy, astronomy, and mathematics a translation of an ancient document called “the emerald tablet” also known as the Smaragdine Table, or Tabula Smaragdina which has fascinated alchemists for hundreds of years. It is believed that this tablet is one of the several that contained information on the practice of alchemy and the secrets of the universe.

It is said that the emerald tablets contain the entire knowledge of the universe. The ancient wisdom of transmutation, the secrets of the cosmos and longevity and according to researchers these tablets were discovered in the Great Pyramids thousands of years ago. But it is one phrase written in one of the tablets that has drawn my attention: “Three is the great mystery, come from the great one”, so basically it is the number three what connects the universe and the cosmos.

Wisdom, consciousness awareness, and power all come from the interplay of the number three.

If anybody were to obtain this knowledge, that person would become the master of life, a master over death, some sort of supernatural being, a superhuman that could practically do anything.

A translation by Isaac Newton is found among his alchemical papers that are currently housed in King’s College Library, Cambridge University.

The great God Brahma is the one that creates all things, Vishnu is the one who maintains reality, and Shiva is in charge of destruction.  You cannot have a renewal, you cannot have continued growth without the destructive energy. So basically these 3 “Gods” maintain a certain balance.

In Hinduism, Shiva is often pictured with a trident, the prongs representing his three fundamental powers: will, action and knowledge. He is also often illustrated as having a third eye in the middle of his forehead. With that eye, he can see things. He has clairvoyance.

Shiva is depicted as having a third eye, right in the middle in his forehead, between the two eyes. It is said that when his “third eye” opens, it radiates enormous amounts of energy, and everything becomes clear, in some way he enters into harmony with the cosmos, becoming in par with the cosmic frequency, perfect harmony. We also find that many other cultures in ancient India and Asia depict creatures with a third eye so this is anything but uncommon in that part of the world. It is said to be the center of one’s spiritual power.

Shiva has many benevolent and fearsome forms. At the highest level, Shiva is limitless, transcendent, unchanging and formless. In benevolent aspects, he is depicted as an omniscient Yogi who lives an ascetic life on Mount Kailash, as well as a householder with wife Parvati and his two children, Ganesha and Kartikeya and in fierce aspects, he is often depicted slaying demons. Shiva is also regarded as the patron god of yoga and arts.

In the practices of Freemasonry, there is a recurring notion that two sides can only find balance by adding a third one, a so to speak central structure and that central structure is often depicted as the “third eye”.

The most spectacular collection of Buddhist cave art in the world is located at the shores of the Yi river where we can find over 1300 ancient caves knows as the Longmen Grottoes which date back to around 493 AD. One of the largest of the over 100,000 stone statues at the site is of the Amitabha Buddha or the Buddha of Infinite Light. He is flanked on either side by his two assistants, and collectively they are known as the Three Saints of the West. These guiding figures represented are exceptional examples of the power of three manifesting in a sacred and yet mystical way, teaching, helping one to a greater level of consciousness, balance, and harmony.

In a former life, Amitabha Buddha was believed to have been a king who renounced his kingdom through a series of vows. And these vows were to create a pure Buddha Land and according to research, the Western Pure land was thought to exist outside of the “normal” confines of time and space.

The journey of the Three Wise Men is perhaps one of the most popular and best-known stories concerning the birth of Jesus Christ yet little is actually known about these mysterious “three wise men“. According to the Gospels the Three Kings, or the Three Wise Men, came from the east and at that time that was an area of the world which for Westerners was considered to be the source of all magic and mysticism, it was an “obscure” region.  The Magi were the ancient priesthood of Persia and their history can be traced back as far as 2000-3000 BC. These individuals, the magi, were extremely interested in astronomy and the movement of the celestial objects, they were astronomers and according to history, the three wise man traveled thousands of miles to reach “the holy land” and they found Bethlehem without a map, only following a star.  As we discussed in earlier posts where we talked about the Three wise men, it is told that this “star” that lead them to Bethlehem actually moved in a way that we know that star does not move, with inconsistent movement in the sky.

The three gifts that the “Three Kings” offered to Jesus Christ were gold, representing all the material needs the child would need throughout his life, Frankincense which is an ancient aromatic resin which when burned is apparently effective in mind expansion and enlightenment and Myrrh which is ancient oil associated with death and embalming representing the afterlife. But the question here is why only these three gifts?

There is a theory that the key to unlocking the power of the number three lies in the mystery of the Holy Trinity, that the notion of three divine persons in one God refers to the three states of being.