5 Ancient Sites Many Believe Were Built By Aliens

The idea that early mankind was influenced by beings, not of Earth has widely spread in modern society.

With the emergence of the so-called Ancient Astronaut Theory, people have started questioning whether it is possible that in the distant past, perhaps tens of thousands of years ago, ancient mankind was visited by otherworldly beings, by spacefaring civilizations, which came to earth and helped instigate humankind.

On Earth, evidence of alien contact is, according to many, vast.

Many ancient sites on Earth defy explanation. For centuries have experts tried unraveling the mysteries how some of these sites were built. Scholars have wondered about how ancient civilizations had the ability to move supermassive blocks of stones, for hundreds of kilometers, from their quarries to the construction sites. They have tired solving the mystery of how they quarried some of these rocks, and with what kind of tools.

The more they searched, the more questions arose.

Since many questions were left unanswered, some people have started wondering whether some of these sites may have actually been built by aliens?

Located outside of Cusco is a massive ancient fortress called Sacsayhuaman. This ancient site was built with supermassive stones that have been chiseled and put into place like an enormous jigsaw puzzle. The ancient fortress walls are composed of Andean rocks that weigh more than 300 tons each, and were carried—transported—from more than 50 kilometers away. Furthermore, somehow these massive stones were lifted and fitted into place with laser-like precision.

Many people argue that cutting, transporting and fitting 300-ton-stones is something that the ancients could have achieved, but only with the help of interstellar visitors.

While personally, I believe that the builders of Sacsayhuaman were of terrestrial origin, I believe they had in their possession advanced ancient technologies that allowed them to achieve such incredible feats.

The city of the Gods was created thousands of years ago, and its design, architecture, and mysterious characteristics have led many people to believe it was built not by human hands.

One of the most massive structures in Teotihuacan is the Pyramid of the Sun. Interestingly, this structure is also one of the largest such constructions in the Western Hemisphere. Furthermore, the pyramid’s curious alignment is believed to be based on calendrical cycles.

The Pyramids of Giza

How the Pyramids of the Giza plateau were built remains an unsolved mystery. Despite the fact that there is written evidence which explains how some of the blocks were transported to the pyramid, archaeologists really don’t know how the pyramid was built. How did the ancient Egyptians stack the massive blocks of stones? How did they move them as the pyramid grew? What was the true purpose of the pyramid? Why is it that the three main pyramids are aligned with Orion? Why haven’t experts found a mummy inside the pyramid, if it was built as a resting place? Why are there still undiscovered chambers inside it? How is it possible that the builders placed the Great Pyramid at the exact center of Earth’s landmass, more than 4,500 years ago?

All of these questions have led to numerous theories which suggest that the Pyramids were built not by human hands, but by an otherworldly influence.

At a distance of around 45 miles west of La Paz Bolivia we find one of the most magnificent ancient sites on the surface of our planet.

The sheer number of megalithic stones found at Puma Punku are amongst the largest found on the planet. Puma Punku shatters all traditional views on ancient cultures. The incredibly precise stones, precision cuts, and polished surfaces have defied explanation for centuries. The andesite stones used in the construction process of this megalithic site were cut with such precision that they fit together perfectly, and are interlocked with each other without the use of mortar. This ancient site continues to defy the countless theories put forth by mainstream scholars, historians, and scientists. Many people argue that this ancient site was not the product of man, but of the gods who came down from heaven, thousands of years ago. 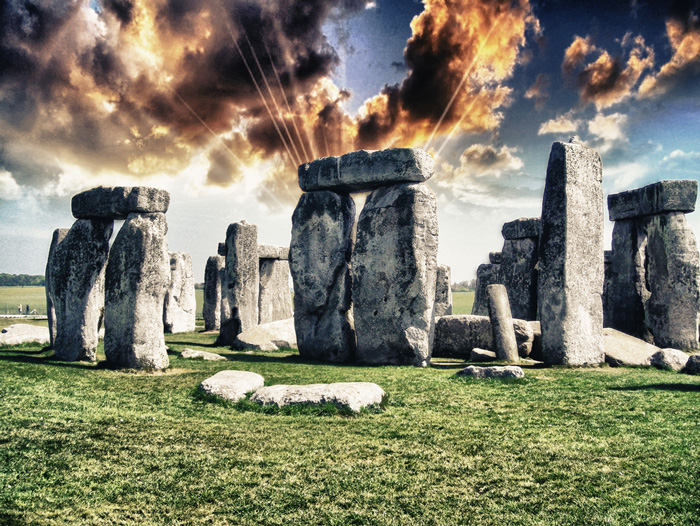 Located outside of Salisbury we find a massive circle composed of stones, ranging in weight between 30 and 60 tons. Believed to have been built during the Neolithic, this fascinating ancient site inspired great authors like Erich von Däniken to ponder whether it’s a massive model of our solar system and whether it may have been used as a landing pad for alien spacecraft.

Today, modern scholars are still unable to decipher the mystery behind Stonehenge. Experts are unable to figure out how the ancient transported the massive stones, nor why they are positioned like they are.