What on Earth are the mysterious pyramids of Antarctica?

The ‘Pyramids’ of Antarctica are one of the most controversial topics on the internet.

Some label them as conspiracy theories while others believe they are just small pieces of the many structures found hidden beneath Antarctica.

Saying that there was a civilization that developed on Antarctica is possibly ludicrous. I mean, after all, Antarctica is one of the most inhospitable places on Earth. 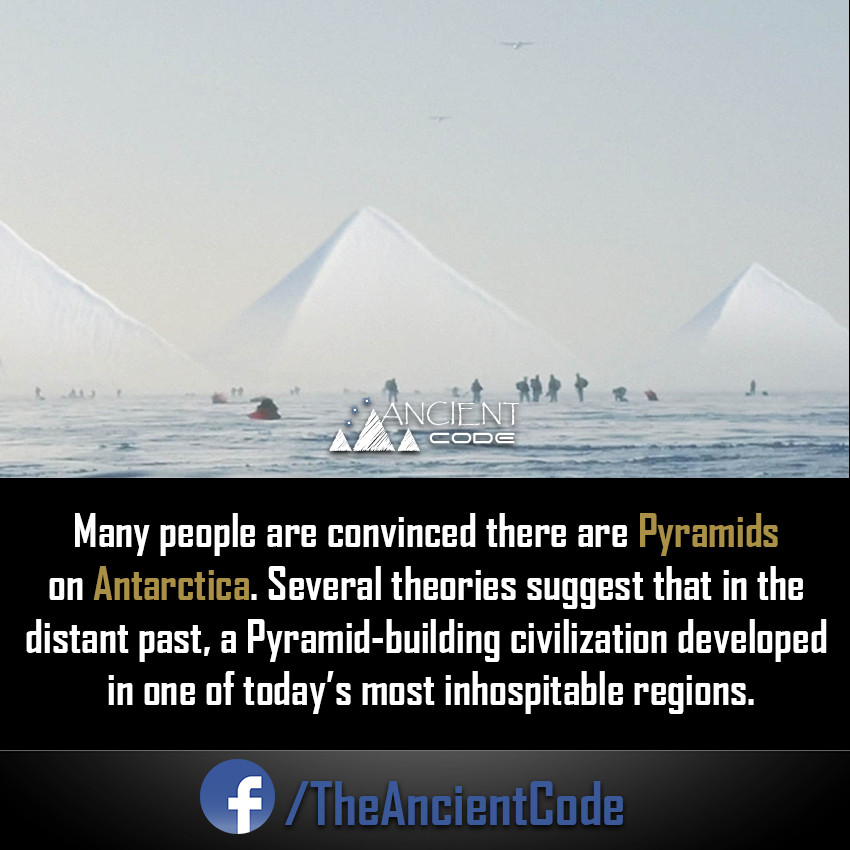 However, if you research a bit more, you will find that millions of years ago, Antarctica was not covered in snow and Ice. What if at some point there was human occupation on the now icy continent?

Speaking to The Sun, Dr. Vanessa Bowman, of the British Antarctic Survey, once said:

“Go back 100 million years ago, and Antarctica was covered in lush rainforests similar to those that exist in New Zealand today.”

To put this into perspective, Antarctica has been one of the most mysterious continents for decades. It is the center of numerous conspiracy theories, and many researchers suggest there’s more to Antarctica than snow and ice. Actually, millions of years ago Antarctica was anything but ice.

During Antarctica’s long history, the continent was at one time, located farther north enjoying a tropical climate. What we see now as ice and snow were in the distant past lush green forests inhabited by various ancient life forms.

In fact, Jane Francis of the University of Leeds told the BBC in an interview:

“I still find the idea that Antarctica was once forested absolutely mind-boggling,” we take it for granted that Antarctica has always been a frozen wilderness, but the ice caps only appeared relatively recently in geological history.”

So, if Antarctica was this entirely ‘beautiful’ continent in the distant past, with massive jungles and ancient lifeforms, is there e a chance human life could have settled there? That’s something we cannot know for sure, as it is extremely difficult to research Antarctica as expeditions are extremely difficult and usually VERY costly.

Today without proper equipment, human beings wouldn’t last very long on the continent, which makes it extremely difficult for researchers to study the continent.

So far experts have discovered pollen in samples taken from Antarctica. This means that at some point in history, the temperature there was around 20 degrees Celsius.

In 2012, experts from Nevada’s Desert Research Institute found 32 species of bacteria from Lake Vida, eastern Antarctica which prove that in the distant past, the climate on Antarctica was very different.

But in addition to all of the above, it seems that some have apparently identified PYRAMIDS on the icy continent.

This has led many people to theorize that just as there were ancient civilizations in Asia, Europe, and Africa, similar human civilization may have developed on Antarctica, creating fascinating structures and apparently even Pyramids.

The Daily Star indicates that if these structures prove to be man-made, it could change our understand of human history drastically.

However, there are also other explanations that may shed light on the mysterious ‘structure’ on the frozen continent.

Earth’s geology is fascinating, in fact, there are numerous natural formations that can easily be misinterpreted for man-made objects. The pyramid-like formations could, in fact, be rocky peaks known as ‘nunatak,’ which are basically protrusions through ice or glacial crust of the mountain peaks or rocks that are simply standing higher than the terrain that surrounds them.

However, many people argue that in many of the so-called Antarctic Pyramids four clearly defined sides are visible.

But this also could be explained geologically and the word we need is EROSION.

In fact, even though some of the pyramids may look like being artificial structures, the truth is that they can easily have formed after natural erosive forces ‘molded’ them for millions of years.

Not that I am saying it is or it isn’t so, I’m just offering as much insight as I can.

The truth is that for millions of years the Antarctic continent may have had ideal conditions of civilization to develop. If –somehow— an ancient civilization did exist on Antarctica when it was covered in green vegetation, and a ‘tropical’ climate, then it’s obvious that we will find traces of their existence at some point.

While there are those who believe that Antarctica is home to many secret “alien” bases, others believe that the formations that were tagged as pyramids are nothing more than natural geological formations.

Interestingly, according to researchers, the Antarctic Peninsula has warmed by an alarming 2.8 degrees Celsius, which is faster than any other part of the world. This means that if this warming were to continue unabated, it is very likely that in the future we could see a “tropical” Antarctica reappear.

The possibilities are endless if you realize that Antarctica wasn’t always as cold, dry and ‘inhospitable’ as it is today.

The question that we are asking is the following: is it possible that Antarctica was once warm enough in the past to make it possible for an ancient civilization to live there? The answer is YES.

But interest in Antarctica is not recent. If we look back a couple of decades, we will find that the Nazi’s were EXTREMELY interested in exploring the icy continent.

The Nazis are said to have built a massive base on Antarctica called Station 211.

According to a number of rumors, ‘Station 211’ did exist, and if it did, then it must have been (maybe still is) located inside the ice-free mountain range in the Muhlig-Hofmann Mountains of Neuschwabenland, aka Queen Maud Land.

According to geologists who participated in the German expedition, the areas where vegetation was present were due to hot springs or other geothermal sources.

One of the most interesting quotes about Neuschwabenland and Antarctica comes from German Navy Grand Admiral Karl Dönitz who said: “The German submarine fleet is proud of having built for the Führer in another part of the world a Shangri-La on land, an impregnable fortress.”

So what do you think about Antarctica? Is it possible that in the distant past, when Antarctica experienced a ‘tropical’ climate, there was a massive human occupation on the continent? What if there is more to the alleged Pyramids of Antarctica than what we are willing to see?