12 Gods Of Slavic Mythology And Their Amazing Powers

The Slavs worshiped a wide range of deities, from the shores of the Baltic to the shores of the White Sea. Slavic folklore is cultic in nature, where the same god can be found worshiped in various guises from tribe to tribe. It has been possible in the last two centuries to reconstruct their ancient myths by studying the roots of Slavic languages, folktales, and traditions, from which has been determined a ‘Proto-Slavic culture’. These studies have led to the re-establishment of the original Slavic gods (much like the Olympians of ancient Greece, or the Aesir of Norse mythology). 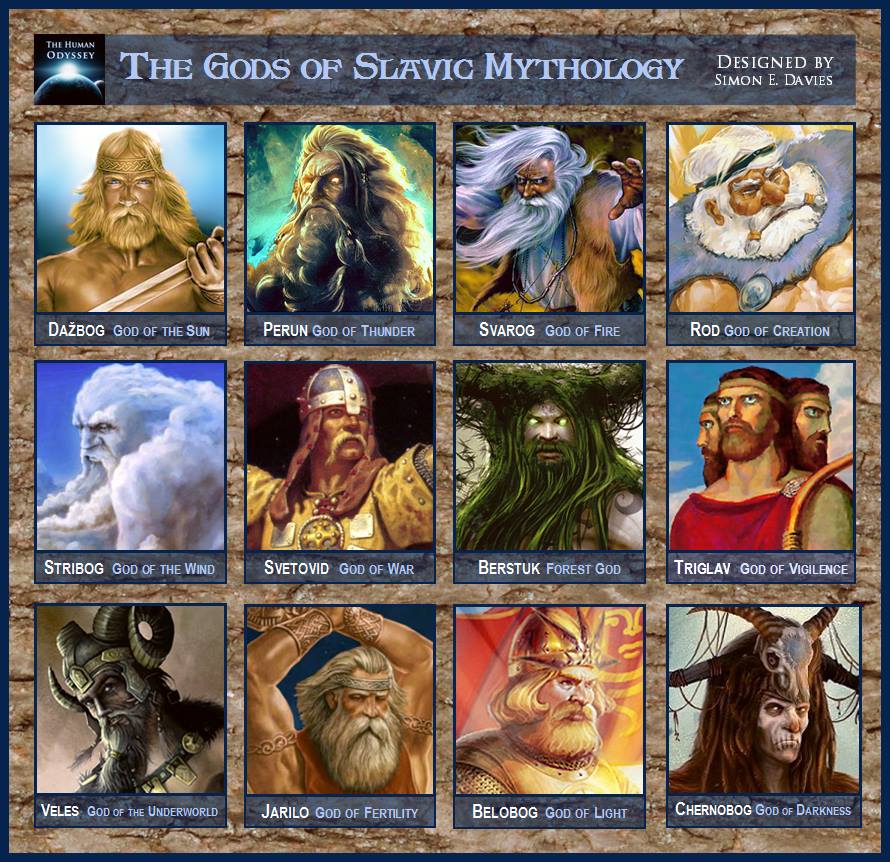 Dažbog is a sun god who was said to be reborn in the morning, from the arms of The Zorya (Dusk). He rode his chariot across the sky, drawn by three horses; one made of gold, one of silver, and another of diamonds. It was said he journeyed through the twelve kingdoms of the day before entering the underworld, where his absence marked the coming of night. The Slavs imagined Dažbog as a maturd man dressed in animal skins and accompanied by a wolf. It was said he could turn into a wolf at will (suggesting he was a lycanthrope).

Perun is a thunder god, associated with mountains, oak trees, and eagles. He is described as a rugged man with a copper beard who rides in a chariot pulled by goats, wielding a mighty ax. He hurls his ax at evil beings, which always returns to his hand (much like Thor’s hammer). Perun presided over the Earth and all its living occupants. He ruled from the sky and was often symbolized by an eagle sitting on the top of the tallest branch of the sacred tree, from which he kept watch over his world.

Svarog has been compared to the Greek Hephaestus, the god of the blacksmiths and craftsmanship. Reconstructionists believe his father is the solar deity Dažbog, and that he uses the flames of the celestial sun to forge metal weapons, magical items, and powerful Armour.

Rod is a god of creation, who is believed to have given birth to gods (and possibly the first humans). Many scholars believe he was the first supreme deity of Slavic mythology, but his position was eventually overtaken by Svarog and Perun (and later Christ). As a creator god, Rod was also linked with designing a individuals fate (much like the Morai and of Greek myth and the Norns of Norse folklore).

Stribog is the god of winds, sky, and air; and is said to be the ancestor of the eight directions. He was imagined as an old man who had a warrior’s horn which he used to control the winds, his grandchildren.

Svetovid is a four-headed war god, associated with fertility and abundance. His many heads represent his omniscient view of the four cardinal directions. His wields a mighty sword and rides a white horse which is used for divination. His followers prayed to him for Victory in battle, safety on the road and for the protection of their villagers. His temples were said to house an oracle who predicted the future of the tribe by observing the behavior of white horses.

Berstuk is a forest god who protects wild animals and woodlands. It has been suggested he may be the chief of wood spirits known as Lesovik (similar to the goodwose of western Europe). Berstuk has been described as having a moss-covered beard and long shaggy hair. The Lesovik were said to lead travelers through the forest in the wrong direction until they were thoroughly lost. The spirit would then disappear leaving the traveler in despair.

Triglav is a three-headed god of vigilance. His heads were believed to represent his overseeing gaze into the sky, earth, and the underworld. It was believed that Triglav oversaw these three kingdoms (similar to Heimdall in Norse mythology). He had an objective view, represented by a golden binding over his eyes and lips so he could not judge people’s sins nor speak about them.

Veles is one of the major Slavic gods associated with the underworld. He is linked to cattle, commerce, and druidic magic. He is the gatekeeper between Yav, the middle world, Prav, the higher world, and Nav the lower realm. He is also associated with a huge serpent which coils around the roots of the world tree, where he ruled over the land of the dead. His opponent is the thunder-god Perun, and the battles between these two deities constituted as one of the most important myths in Slavic mythology.

Jarilo was a major god of vegetation, fertility, and spring, also associated with war and harvest. He is believed to be the lost son of the Perun. It is said Jarilo was stolen from his father and taken to the world of the dead, where he was adopted and raised by Veles, Perun’s enemy. Jarilo and his sister Morana (goddess of winter & death), are associated with the end of winter and the beginning of spring.

Belobog is the “White God” of the waxing year, and one of Dazbog’s companions. He embodies sunshine, warmth, and life. His followers pray to him for guidance through the dark forests, and to help bring about a bountiful harvest. Belobog is imagined as a bright, bearded man, carrying a staff and dressed in white robes. He only appeared during the daylight, doing good deeds as he went and bringing people success and happiness.

He was said to fight his evil brother Chernobog, the “Black God”, twice a year for control of the seasons. Chernobog was associated with bleak attributes such as cold, famine, poverty and illness. Despite this, he is still respected among all the other gods. During the creation of the world, some say these two brothers came into conflict, and their polarising actions created the cycles of the universe (night & day, summer & winter and the motion of the stars). Chernobog rules over the dark half of the year, opposed by Belobog who presides over the brighter half.

Very similar to the Egyptian cosmos, Slavic mythology values the darkness as an important aspect of the cosmic balance. Evil gods were dangerous and could bring great misery upon the land, but as long as the good deities presided over their duties, darkness would always make way for light, hope, and prosperity. By respecting the darker side of nature, the Slavs were able to survive it and find their way back to the light.