Cosmic particles collected inside Pyramid could reveal secrets and explain...

Researchers have revealed exciting new findings at two of Egypt’s pyramids, boosting efforts to find out if the ancient world’s iconic monuments indeed contain secret chambers as many believe.

Researchers participating in the Scan Pyramids project have discovered numerous interesting details inside the Pyramid of ‘Cheops’ at the Giza plateau in Egypt which could help explain the system used to build this ancient monument and reveal more secrets about these antique structures that according to many, could predate the ancient Egyptian civilization. 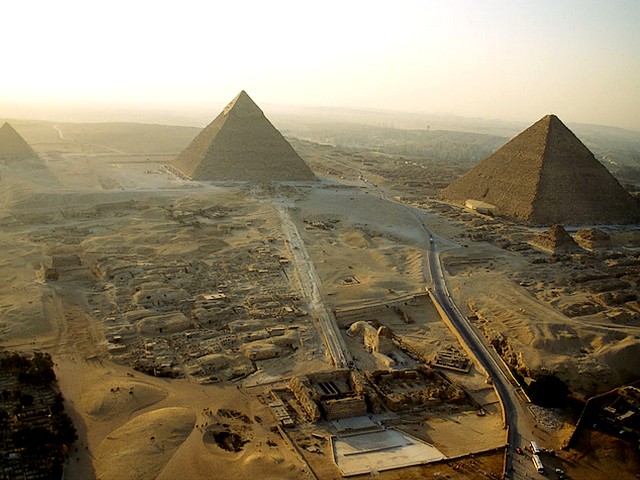 Researchers from Egypt, France, Canada and Japan have been scanning four pyramids with thermal cameras for the past three months to see if they contain unknown structures or cavities. Operation ‘Scan Pyramids’ began October 25 last year in order to reveal hidden rooms inside the Great Pyramid, Pyramid of Khafre and the Bent and Red pyramids in Dahshur, all south of Cairo.

In a press conference held in the Egyptian Museum in Cairo, the director of the Institute for Heritage Preservation and Innovation, Madi Tayubi made the announcement as part of the preliminary results of the ongoing project “Scan Pyramids”.

With Muon tomography (particles of energy that penetrate objects), you can discover if there are hidden chambers in the pyramids. Muon tomography is a technique that uses cosmic ray muons to generate three-dimensional images of volumes using information contained in the Coulomb scattering of the muons.

The main objective of the research is to understand ‘how’ the ancients built the pyramids, how they were able to move huge blocks of stone one above the other, and raise the structure up to 150 meters in height.

On Sunday, researchers finally revealed new findings in regards to the limestone blocks that constitute the western flank of the Red Pyramid and northern flank of Khufu’s Pyramid.

“There is a clear separation of temperature on the west face of Red pyramid. The bottom is colder than the top,” Matthieu Klein of Canada’s Laval University told a news conference.

“It’s interesting. We have no answers yet … Could it be because of the wind? Maybe, but it’s interesting,” he said, adding that the difference in temperature was of three to six degrees Celsius.

Scan Pyramid seeks to confirm that the temperature differences discovered between several stones at the pyramid of Cheops are not the result of outside weather or seasonal changes. In November last year, the group of researchers announced the finding of temperature anomalies in various blocks of the pyramid of Cheops, a discovery that according to them, indicates there is “something behind” the stones. While experts did not give out more details as to what that ‘something’ is, we expect to have more news on the matter in the next couple of months.

According to Klein, two anomalies were also located on the northern flank of Khufu, where experts have previously found similar “points of interest” on the monument’s eastern face.

More investigations will be carried out to include further data analysis of the anomalies detected so far.

“The primary result tells us that we have some news, some good news,” Antiquities Minister Mamduh al-Damati said.

“We will have some secrets to solve in the pyramids, but it’s very early to say what they are.”

November last year, the group of researchers announced the finding of temperature anomalies in various blocks of the pyramid of Cheops, a discovery that according to them, indicates there is “something behind” the stones. While experts did not give out more details as to what that ‘something’ is, we expect to have more news on the matter in the next couple of months.