Evidence of Nuclear War in the distant Past: The destruction...

The story that speaks about Sodom and Gomorrah is very interesting, not only by tales of destruction but also of the peculiar personalities involved as the angels who warned Lot to leave the doomed cities. Lot was actually warned that these cities would suffer a catastrophic fate, something that ancient astronaut theorists have interpreted as a warning before the cities were bombarded by extraterrestrial beings with high-tech weapons.

Sodom and Gomorrah are probably two of the most infamous cities that has existed on planet Earth. These cities have been lost for millennium, and only in recent years the sites have been tentatively identified by researchers who have proposed dozens of different theories about the historical cities. 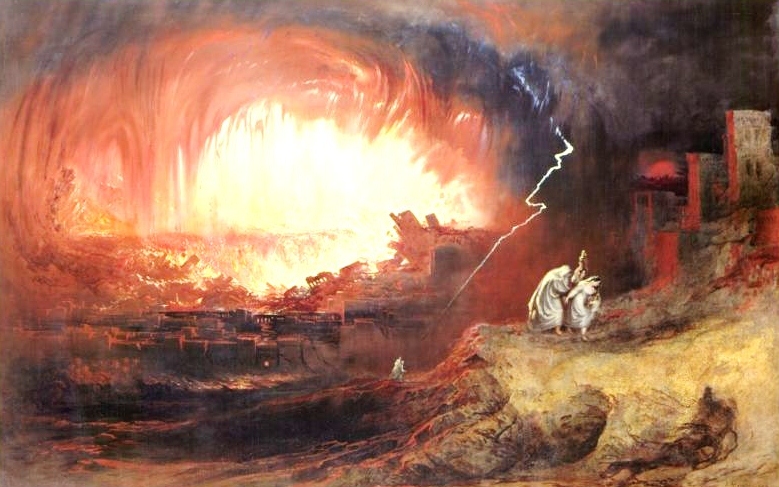 The Dead Sea is contained within a sunken block confined by two parallel geological faults, a configuration that according to researchers, indicates a catastrophic origin. This strange depression was not caused by water, and the Dead Sea isn’t actually a sea but is rather a lake that doesn’t have any exits. According to mainstream science, during the Miocene period (from 7 million to 26 million years ago) the natural processes caused fractures which consequently formed the depression of the Dead sea. The destruction of Sodom and Gomorrah is not believed to have been an isolated event.

Some researchers have come forward suggesting that Sodom and Gomorrah, are the Hiroshima and Nagasaki of the distant past, over 4000 years ago.

Here is what the Bible says:
(Genesis 18:20; 19: 24-26.28)
24 Then the Lord rained down burning sulfur on Sodom and Gomorrah—from the Lord out of the heavens. 25 Thus, he overthrew those cities and the entire plain, destroying all those living in the cities—and also the vegetation in the land. 26 But Lot’s wife looked back, and she became a pillar of salt.

27 Early the next morning Abraham got up and returned to the place where he had stood before the Lord. 28 He looked down toward Sodom and Gomorrah, toward all the land of the plain, and he saw dense smoke rising from the land, like smoke from a furnace.

We know that the Dead Sea’s surface and shores are 429 meters (1,407 ft) below sea level, Earth’s lowest elevation on land. The Dead Sea is 304 m (997 ft) deep, the deepest hyper-saline lake in the world. With 34.2% salinity (in 2011), it is also one of the world’s saltiest bodies of water, though Lake Vanda in Antarctica (35%), Lake Assal in Djibouti (34.8%) Jordan and many smaller rivers flow into the Dead Sea. The Jordan river has a major significance in Judaism and Christianity and, to a more moderate degree, Islam, as the site where the Israelites crossed into the Promised Land and where Jesus of Nazareth was baptized by John the Baptist. Evaporation under the scorching sun takes place on the surface of the Dead sea at a speed of more than 230 million cubic feet per day. According to the Arab tradition, there are many poisonous gasses evaporating from the lake that are so hazardous that birds cannot fly over it.

The standard historical theory about the destruction of Sodom and Gomorrah, as written in “The Bible as History in The Pictures” by Werner Keller, sustains that the cities of the Valley of Sidim were destroyed when a tectonic plate movement caused the Great Rift Valley – of which the Dead sea is a port of, to move and the area at the southern end of the Dead Sea sank. However, Keller admits that there is a serious problem with this theory of a cataclysm in the Valley of Siddim, According to Keller:

In particular, we must remember there can be no question that the Jordan fissure was formed before about 4000 B.C. Indeed, according to the most recent presentation of the facts, the origin of the fissure dates back to the Oligocene, the third oldest stage of the Tertiary Period. We thus have to think in terms not of thousands, but of millions of years. Violent volcanic activity connected with the Jordan fissure has been shown to have occurred since then, but even so we do not get any further than the Pleistocene which came to an end approximately ten thousand years ago. Certainly we do not come anywhere near to the third, still less the second millennium before Christ, the period that is to say, in which the Patriarchs are traditionally placed.

In addition, it is precise to the south of the Lisan peninsula, where Sodom and Gomorrah are reported to have been annihilated that the traces of former volcanic activity cease. In short, the proof in this area of a quite recent catastrophe which wiped out towns and was accompanied by violent volcanic activity is not provided by the findings of the geologists.

In late 1999, a new theory was proposed by Michael Sanders and an international team of researchers who, after several tense weeks of diving in a mini-submarine, discovered what appeared to be salt embedded in the remains of ancient settlements on the seabed.

Interestingly, Sanders had discovered a peculiar map that dated back to 1650 which helped reinforce his belief that these two cities could have been located in the northern basin and not the southern end of the Dead Sea. He received the help of Richard Slater, an American geologist and expert on deep-sea diving who took him to the depths of the Dead Sea in the Delta mini-submarine with a capacity of two men. The location of Sodom and Gomorrah, in the deep end in the northern Dead Sea, according to Sanders is, even more, contradictory to history that postulated by Keller.

Now, what if these cities were not destroyed in a geological cataclysm, but rather by an apocalypse caused by the intervention of divine beings, or as some suggest, extraterrestrial beings. Were Sodom and Gomorrah attacked with atomic weapons, just as Hiroshima and Nagasaki?

Researcher LM Lewis, in his book Footprints on the Sands of Time, claims: When Hiroshima was being rebuilt, stretches of sandy soil were found to have been atomically changed into a substance resembling a glazed silicon-permeated by a saline crystalloid. Little blocks of this were cut from the mass and sold to tourists as souvenirs of the town – and of an atomic action.

Had an even larger explosion pulverized every stone of every building – and had the complete city disappeared into thin air – there would still have been tell-tale indications of what had occurred on the outskirts of the area of devastation. At some points, there would surely be a marked difference in the soil or an atomic change in some object of note.