That sounds just ludicrous, doesn’t it? But is it crazy?

You’d be surprised by the answer.

The Great Pyramid of Giza hides many secrets. In fact, despite the fact that it was (according to mainstream scholars) built some four thousand years ago, we have still not unraveled all its mysteries.

Thousands of years ago, the Great Pyramid of Giza was erected in modern-day Egypt.

The result? A stunning ancient monument home to many mysteries, yet few answers.

Despite having studied, researched and explored the pyramid for centuries, mainstream scholars have been unable to understand how the builders of the structure managed to erect such a precise monument, thousands of years ago, without the use of modern tools and technologies.

That SIZE! The Great Pyramid of Giza!

An even greater mystery is how the Pyramid’s builders erected what was long considered as the most accurately aligned structure in existence, facing true north with only 3/60th of a degree of error.

However, not only is this ancient monument one of the most accurately aligned buildings on the surface of the planet, there are countless other details that make it even more stunning.

Did you now that, somehow, thousands of years ago, the ancient builders of the Pyramid used more than 2,300,000 stone blocks that weigh from 2 to 50 tons each to build a structure that would stand the test of time?

If that fact did not arouse your curiosity, did you know that the base of the pyramid covers 55,000 m2? And that the outer mantle was composed of 144,000 casing stones, all of them highly polished and flat to an accuracy of 1/100th of an inch, about 100 inches thick and weighing approximately 15 tons each?

Stunning characteristics of a structure built thousands of years ago

However, did you know that the Great Pyramid of Giza contains enough stone to build a wall around the Earth? 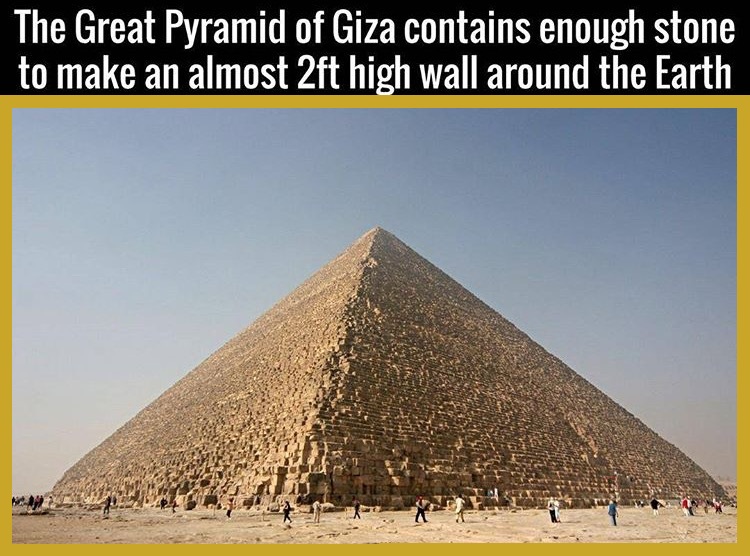 Yeah, it’s not fake news, not craziness, and not me trying to write up a cool article, all of my articles are cool. 😛

So yeah after this claim, you’d ask… where’s the proof?

Let’s get the facts straight.

So, the volume of the Pyramid is:

Suppose the width of the wall is X m.

The height of the Wall: 2 ft

Meaning that there is, in fact, enough stone in the Great Pyramid of Giza to build a 2ft high wall around the earth that is 10cm (.35ft) thick.