Secret Ciphers: The Forgotten Language Of The Ancients

Around the world there exist a number of undeciphered texts that date back as far as the Neolithic (8000 BCE). These ancient writing systems must be viewed with an open mind as they may have been composed with artistic intent, but its most likely they represent the origins of abstract thought and writing.

Many scholars have tried to decode these prehistoric ciphers, but so far, no one has cracked their arcane secrets. The knowledge they have could be mind-blowing, perhaps offering a glimpse into the rituals and myths of the ancient world – or they may be as mundane as a list of directions to the local village. 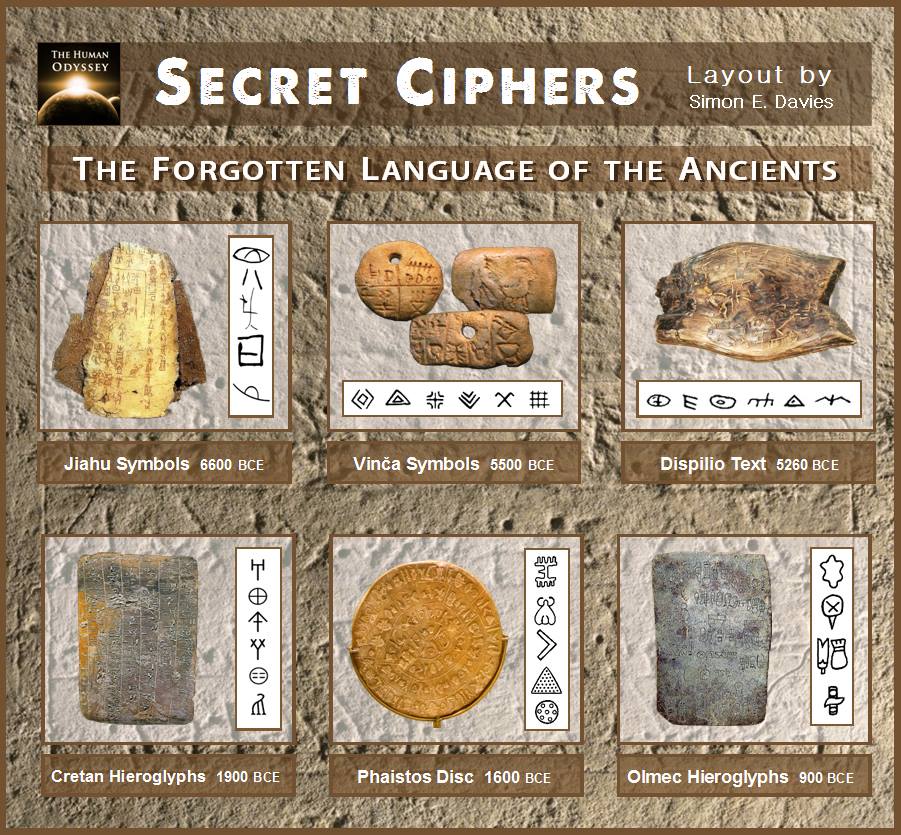 These mysterious texts include:

The Jiahu symbols (6,600 BCE) resemble a proto-writing style composed of 16 distinct markings (found on a wooden tablet in Jiahu, China). Archaeologists believe these markings to be a proto-language to the later known ‘oracle bone script’ (a sacred text carved onto bone). The Oracle Bones were used for divination, suggesting that the ancient Jiahu symbols may have had a supernatural purpose.

The Vinča symbols originated in S.E. Europe at around 5,500 BCE. This mysterious script was etched into a series of clay amulets and is considered to be one of the oldest examples of “proto-writing” in the world. Some have linked these symbols to the Indo-Europeans, an ancient culture whose cultural heroics went onto inspire many of the mythical systems we know today (e.g. the Greek epics and Norse Sagas etc). The nature and purpose of the symbols remain a mystery to this day.

The Dispilio tablet (5260 BCE), is a wooden birch block which bears strange, symbolic markings. An old European folktale speaks of a primordial birch goddess who taught her people the craft of writing. Could it be that this tablet is in some way associated with the myth of Gods imparting knowledge to humans? Unlike other ideograms found in the Neolithic (picture based symbols), the Dispilio tablet seems to represent signs alluding to early phonetics, indicating advanced speech.

The Cretan Hieroglyphs were found on artifacts from Bronze Age Crete (1900 BCE). It predates Linear A texts by a century and was used in parallel for most of Minoan history. The Cretan symbols bear a naturalistic style of characters, typically resembling objects like plants, animals, weapons, ships and amorphous shapes. It is suggested they were based on ornamental and ritualistic functions whereas Linear A was employed in more mundane, administration ways.

The Phaistos Disc is a strange text written on a ceramic plate from the Minoan era (1600 BCE). Its strange layout and meaning remain a mystery to archaeology. Perhaps it is in the realm of mythology that a glimpse of its original purpose can be found. According to legend, Phaistos was the city that gave birth to one of the seven sages of the old world, Epimenides. Legend tells us that he slept in Zeus’s cave and acquired the powers of prophecy. His skin was said to be covered with tattooed symbols similar to that of the Phaistos Disc. Is it possible the disk contains the secrets of Cretan wisdom and divination?

Finally, there is the Cascajal Block (900 BCE), a stone tablet from the Olmec civilization. this tablet was scored with strange symbols which many believe represent the earliest writing system in the New World. The block holds a total of 62 glyphs, some of which resemble plants, animals and vegetables. Many of the symbols are abstract, and unlike any other writing system found in Mesoamerica before or after. Some suggest that it was used as a signpost directing travelers to a local market, others that they represent clan names for merchants and royalty. It has even been hinted that it is a map that leads to a lost Olmec city, laden with treasure.