The aerial battle of 1561 over Nuremberg: Mass UFO-Sighting

One of the best recorded UFO sightings in history according to many ufologists happened in 1561 over Nuremberg, modern-day Germany. Hundreds of people witnessed strange flying objects in the sky with a technology foreign to our very own today. It is believed to be one of the best-recorded Mass-Sightings in history.

Hundreds of years ago the little knowledge mankind had about star and planets was more connected with astrology than with science. Our understanding back then was not expanded as it is today, where we know that there are thousands of Earth-like planets in the universe and that most of them have the ability to sustain life as we know it. Today we know almost for certain that there are other lifeforms that inhabit the universe, and it is very unlikely that we are the only intelligent species around. Hundreds of years ago, people probably never suspected that there could be extraterrestrial life elsewhere in the universe.

How would it have been for people in the 1560’s to witness a UFO encounter? How would people back then have interpreted a sky full of strange objects waging a war in the “heavens”? It was a mass sighting that was even recorded in the local newspaper. According to accounts, the UFO’s even crashed and burned in the surrounding areas of the city.

The day was April 14th, 1561, people left their homes to go about their everyday activities, but when they looked towards the sky, they saw something terrifying and unexplainable, as dozens of strange crafts were flying above the city. Reports say that the objects had several different shapes, some of the objects were cylindrical shaped UFO’s, disk-shaped UFO’s and several smaller spheres.
The local newspaper from Nuremberg gave the following description of the events over the city:
“In the morning of April 14, 1561, at daybreak, between 4 and 5 a.m., a dreadful apparition occurred on the sun, and then this was seen in Nuremberg in the city, before the gates and in the country – by many men and women. At first there appeared in the middle of the sun two blood-red semi-circular arcs, just like the moon in its last quarter. And in the sun, above and below and on both sides, the color was blood, there stood a round ball of partly dull, partly black ferrous color. Likewise there stood on both sides and as a torus about the sun such blood-red ones and other balls in large number, about three in a line and four in a square, also some alone. In between these globes there were visible a few blood-red crosses, between which there were blood-red strips, becoming thicker to the rear and in the front malleable like the rods of reed-grass, which were intermingled, among them two big rods, one on the right, the other to the left, and within the small and big rods there were three, also four and more globes. These all started to fight among themselves, so that the globes, which were first in the sun, flew out to the ones standing on both sides, thereafter, the globes standing outside the sun, in the small and large rods, flew into the sun. Besides the globes flew back and forth among themselves and fought vehemently with each other for over an hour. And when the conflict in and again out of the sun was most intense, they became fatigued to such an extent that they all, as said above, fell from the sun down upon the earth ‘as if they all burned’ and they then wasted away on the earth with immense smoke. After all this there was something like a black spear, very long and thick, sighted; the shaft pointed to the east, the point pointed west. Whatever such signs mean, God alone knows. Although we have seen, shortly one after another, many kinds of signs on the heaven, which are sent to us by the almighty God, to bring us to repentance, we still are, unfortunately, so ungrateful that we despise such high signs and miracles of God. Or we speak of them with ridicule and discard them to the wind, in order that God may send us a frightening punishment on account of our ungratefulness. After all, the God-fearing will by no means discard these signs, but will take it to heart as a warning of their merciful Father in heaven, will mend their lives and faithfully beg God, that He may avert His wrath, including the well-deserved punishment, on us, so that we may temporarily here and perpetually there, live as his children. For it, may God grant us his help, Amen. By Hanns Glaser, letter-painter of Nurnberg”. (Source: Colman S. Von Kevicsky, “The Ufo Sighting Over Nuremberg in 1561” Official Ufo January 1976, pp. 36-8, 68. The translation is by Ilse Von Jacobi.)
What were the mysterious objects that invaded the sky over Nuremberg? Today, there are several theories about the phenomena, most of them are connected to extraterrestrial beings. 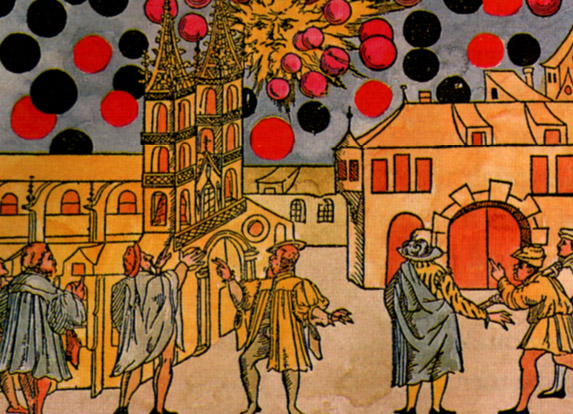 What are the odds that the skies over Nuremberg did in fact witness a mass UFO sighting? According to reports; Some of the UFO’s were definitely made out of some sort of metals, as people described them as “flying gun barrels”. Other objects were described as “huge black spears”, traveling at great speed across the sky.

The Battle over Nuremberg lasted for about one hour as people watched a never before seen battle in the sky. After the battle concluded, the remaining UFO’s disappeared flying towards the sun.