The Secret Pyramid In North Dakota You Probably Never Heard... 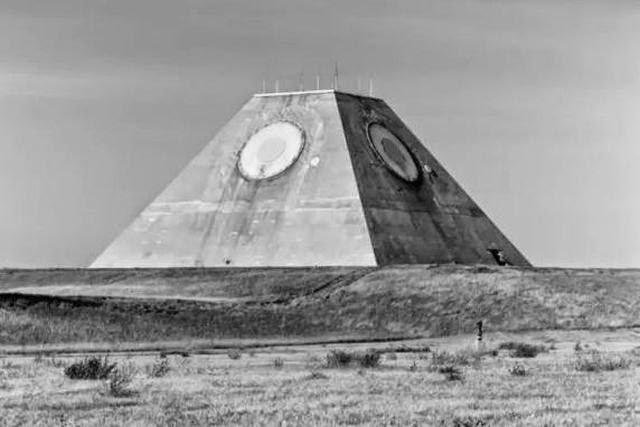 This is the Pyramid you probably never heard of and it is located in Cavalier County, North Dakota, representing the point of collision of two worlds in a huge radar that has the mysterious shape of a pyramid- built to face a devastating attack of Soviet missiles during the Cold War. But some believe that this facility has a far bigger purpose, one that could otherworldly meanings.

Many ufologists and researchers have questioned the particular shape of this complex, why was it built in a pyramidal shape? And why does it seem to resemble the pyramids ancient people built thousands of years ago, in Egypt, America and Asia? What possible connection does this facility have with these ancient wonders? And could it be possible that this pyramid, built in modern times, proves theories supporting that the ancients did not built their pyramids as tombs and monuments, but as structures with a far greater purpose?

The Library of Congress in Washington DC, has published the photos of the construction of a military missile base with a pyramidal form, and some believe that its capabilities go far beyond its original purpose, defend against a Soviet aggression.

The Library of Congress in Washington DC, has published photos and drawings of a military complex built in the state of North Dakota in 1975. In the photos, taken by photographer Benjamin Halpern for the US Government, the various stages of building appear to be very similar to the Mexican pyramid of Kukulkan in the archaeological complex of Chichen Itza.

The purpose of this radar pyramid was to detect and intercept ballistic missiles launched by the Soviet Union that could threaten the United States. This “high tech” radar base was equipped with 30 interceptor missiles LIM-49A Spartan and 16 short-range missiles which could destroy incoming threats such as missiles to US soil. The military believed that this new complex would provide safety and a new and advanced way to eliminate the threat of a nuclear missile strikes from the USSR due to its capability of intercepting enemy missiles before reaching US soil, in the atmosphere. Thanks to the radars located on each of the sides, the pyramid provided a 360 degree coverage and was able to detect intercontinental missiles at a distance of 1,100 kilometers and intercept them before reentry.

The Russians did not wait long and built the Soviet A-35 system, which defended Moscow and nearby missile fields. It is believed that an updated version of this defense system, the A-135 version is still in operation today.

The interior of the pyramid is just like the exterior, amazing,  housing several underground bases where the control room and monitoring systems were located. All of those rooms were connected to a network of powerful radars across US soil. It is a construction straight out of a Star Wars movie, but its peculiar design and shape has awaken the interest of ufologists that have come to question its purpose. Was it built to intercept intercontinental missiles? Or was the construction of this strange pyramid, in North Dakota of a otherworldly purpose?

These wonderful photographs a pharaonic building that has been lost in time, something that has captured the interest of researchers and science fiction writers alike, yet, it is a pyramid that most of us have never heard of. According to many, today, not a single  human being can be seen for miles around the complex, and official statements are that the facility is completely abandoned,looking like a post-apocalyptic science fiction movie scene.

Out of the hundreds of shapes the builders could have used to construct their “radar” station, why was the pyramidal shape used? According to many theorists and ufologists, it has a deep connection to the history of mankind and the origins of humanity. Not only was this complex facility built as a defensive station, ufologists believe it to be a secret facility and the images above are only the tip of an underground “iceberg”

This high tech station was closed “official” only four months after being opened, reports as to why the station that costed millions of dollars closed after only being operated for four months is something that has yet to be explained. Some believe it was closed because the station was proven to be ineffective, others believe that the costs of maintaining it were simply to high, but there are also those who believe that this station has not been closed, and that it is still in operation today, not as a defensive complex, but rather as a facility similar to Dulce Base.

Ufologists state that the government would not have thrown away such a complex base worth millions of dollars, they believe, that the “futuristic” Pyramid located in North Dakota is a place of extreme importance even today, and state that strange sightings that have been reported in North Dakota, of unidentified flying objects are closely connected to this “research facility.”

Perhaps the truth about this secret Pyramid and its purpose is something that will be kept in secrecy, but many questions that have been raised throughout the years as to why a pyramid, and why it resembles many other ancient pyramids is something many would like to know the answer to.

Here we leave you a series of images of this incredible construction: