15 extremely rare, ancient images of the Pyramids of Giza...

In this article, we take a look at ten of the most impressive, rare and ancient images of the Pyramids at Giza we’ve managed to find. Behold fifteen breathtaking images of the most incredible ancient structures on the planet like you’ve never seen them before. 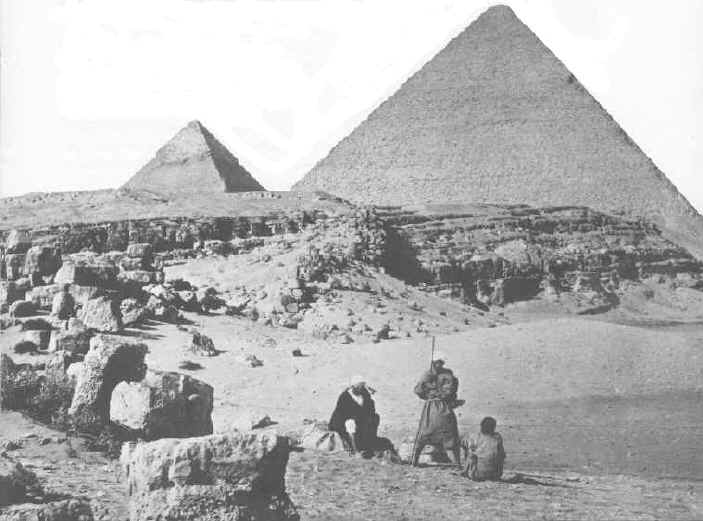 The Pyramids at the Giza plateau are considered by many as some of the most incredible ancient monuments ever erected by mankind while others believe it is the ultimate evidence that before written history, our planet was inhabited by extremely advanced civilizations and one of their most incredible achievements is the construction of the Great Pyramid. While we are still unsure as to what the Pyramids original purpose was when they were built and by whom, we know that the Pyramids of the Giza plateau are one of the most famous ancient monuments on the surface of the world. This has placed them on the list of most photographed ancient sites on the planet.

Researchers estimate that the original builders of the Great Pyramid of Giza used a staggering 2,300,000 stone blocks weighing from 2 to 50 tons to complete the construction of the Pyramid. If you ask me that is an impressive number that still challenges today’s engineers, architects, and machinery.

What makes the Great Pyramid even more impressive is the fact that the mortar used in the construction fo the Pyramids is of an unknown origin (Yes, no explanation was given). It has been analyzed and its chemical composition is known, but it cannot be reproduced. It is stronger than the stone and still holding up today.

In the distant past, when the Pyramids were just built, it is believed that the Great Pyramid of Giza was covered with casing stones (made of highly polished limestone). These casing stones reflected the sun’s light and made the pyramid shine like a jewel. They are no longer present being used by Arabs to build mosques after an earthquake in the 14th century loosened many of them. It has been calculated that the original pyramid with its casing stones would act like gigantic mirrors and reflect light so powerful that it would be visible from the moon as a shining star on earth. Appropriately, the ancient Egyptians called the Great Pyramid “Ikhet,” meaning the “Glorious Light.”  How these blocks were transported and assembled into the pyramid is still a mystery. (source)

Of all the Pyramids in Egypt today, the Great Pyramid is the only one in Egypt with descending and ascending inner passages is a fact that cannot be overlooked when comparing it to other similar structures in Egypt. While the reason behind it remains a mystery, it is evident that the Great Pyramid was a unique structure built in ancient Egypt.

The list of impressive features of the Pyramids at the Giza plateau is very extensive, but this article aims at showing you this incredibly ancient structure as you have probably never seen before.

Today, there are probably millions of beautiful images of the Great Pyramids, and accompanying structures, however in this article, we take a look at some of the rarest and oldest images we managed to get our hands on.