5 Unconventional facts about the Great Pyramid of Giza that...

The Great Pyramid of Giza is rightfully considered as one of the most incredible ancient structures ever built on the planet. Its beauty is unmatched and its precision and stonework challenge even the most advanced technologies today. The truth is that if we wanted to replicate such an architectural project today we would have an extremely hard time doing so.

Just how, ancient man achieved this without the use of power tools, the wheel and advanced machinery is a mystery that has baffled anyone who has tried understand how this ancient structure was erected. With a staggering 2,300,000 stone blocks ranging in weight from 2 to 50 tons, the Great Pyramid of Giza is an exceptional masterpiece that has inspired countless books, articles, and movies in the last century.

The great pyramid of Giza is the only remaining structure of the 7 wonders of the ancient world. However, this is not a coincidence since the incredibly intricate design and careful planning of the builders allowed the Pyramids of the Giza Plateau to remain standing after several thousands of years.

In this article, we take a look at five completely unconventional facts about the Great Pyramid of Giza.

The Great Pyramid was NOT a tomb

When it was first entered by the Arabs in 820 AD, the only thing found in the pyramid was an empty granite box in the King’s chamber called the “coffer.” (source)

The most UNIQUE Pyramid ever built 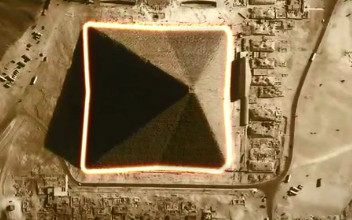 The centers of the four sides are indented with an extraordinary degree of precision forming the only 8 sided pyramid; this effect is not visible from the ground or distance, but only from the air and then only under the proper lighting conditions. This phenomenon has remained a mystery for thousands of years mainly because it is only detectable from the air at dawn and sunset on the spring and autumn equinoxes when the sun casts shadows on the pyramid.

However, it is also the only known pyramid in Egypt to have both descending and ascending inner passages. While the reason behind it remains a mystery, it is evident that the Great Pyramid is the most unique structure built in ancient Egypt.

The number of mathematical representations built within the pyramids is another mind-boggling fact that not many people are aware of. It seems that the builders of the Great Pyramid were not only exceptional builders and architects, by the look of things they were incredible scientists as well.

It is believed to have shined like a mirror

Its incredible size of the Pyramid allowed the structure to be seen from incredible distances. In fact, the Great Pyramid can easily be observed in numerous satellite images of Earth. However, its incredible size wasn’t the only important fact that allowed the Pyramid to be seen from great distances. The Great Pyramid of Giza was originally covered by casing stones made of polished limestone. Ancient Egyptians called the Great Pyramid “Ikhet,” meaning the “Glorious Light.” These casing stones are said to have reflected the Sun’s light in such a way that they made the Pyramid shine as if it were a giant mirror. These casing stones are no longer present since they were used by Arabs to build mosques after an earthquake in the 14th century loosened many of them. It has been calculated that the original pyramid with its casing stones would act like gigantic mirrors and reflect light so powerful that it would be visible from the moon as a shining star on earth.

The Great Pyramid of Giza is one of the most amazing aligned structures on the surface of the planet. While many are aware of the ‘Orion Correlation Theory’, most people do not know that the Great Pyramid is located at the center of the land mass of the earth. The east/west parallel that crosses the most land and the north/south meridian that crosses the most land intersect in two places on the earth, one in the ocean on the opposite side of the planet and the other at the Great Pyramid. However, many people believe that in addition to the above, the Great Pyramid is mathematically connected with numerous other ancient sites across the planet, one of them being Stonehenge in England. The theory which suggests that numerous ancient monuments are linked proposed by Alfred Watkins in 1921 who came up with the idea that ancient sites were specifically placed on certain points across the globe. These sites could be discovered by following what Alfred Watkins referred to as Ley Lines.