An Electromagnetic Sphere was located on top of the Great...

According to a study from architect Miguel Perez Sanchez a series of impossible figures with the number pi, e, and continuous references and relationships with the star Sirius give a new perspective on the great encyclopedia of knowledge that is the Great Pyramid of Egypt. 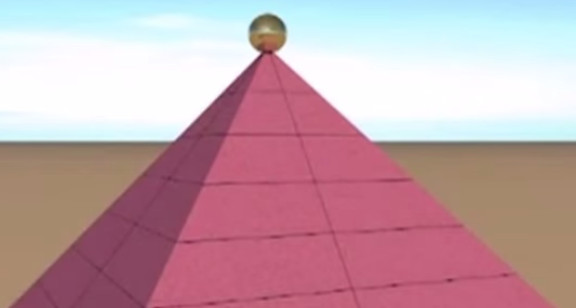 The question is what was the purpose of this mysterious device? Is it possible that, like many researchers suggest, the Great Pyramid of Giza was used as some sort of giant power generator across ancient Egypt?

As proposed by Pérez-Sánchez, the sphere that the ancient Egyptians placed at the top of the pyramid symbolized the Eye of Horus and had a diameter of 2,718 royal cubits (2.7 meters), which is the accurate measure of the number e. The sphere located on the Pyramid was placed as a worship to the Sun and Sirius, the brightest star in the sky, which was associated with Isis.

Many theorists have speculated that the Great Pyramid of Giza might have been built to act as a giant power plant. The Great Pyramid is so precise and so accurate that it must have had a much greater purpose.

Today we know that the primary base line dimension of the Great Pyramid is harmonically integrated to the Earth via a 1/14400 ratio and that the latitude placement has been shown to possess a most decisive association to the Earth tropical year frequency.

Nikola Tesla might have tried replicating what the Ancient Egyptians did in the distant past.

So what do these two have in common? Well for starters the placement of the Great Pyramid of Giza wasn’t chosen at random, and curiously, neither was Tesla’s Knob Hill. It is believed that Tesla picked Knob Hill because of the latitude that allowed him a favourable energetic arc length displacement from the equator of the Earth.

“The arc length separation between Tesla’s lab and the equator is harmonically tied in to the arc length separation between the Great Pyramid and the equator, via the primary numeric sequence of the sexagesimal system. And with it already previously shown that the latitude placement of the Great Pyramid has a distinct tie-in to the current Earth tropical year (x10) pulsation rate, that such an ‘ideal’ ratio of 1.296 (162/125) connects up the Great Pyramid latitude to that of the transmitter station established by Tesla; it is quite conceivable therefore that he was applying the same scientific principles of resonance applicable to the Earth, as the ancient Egyptians who built the Great pyramid.” – Keith M. Hunter

What we have here is the Great Pyramid of Giza and Tesla’s Lab, both of them specifically placed and constructed for an incredible purpose that we have been unaware of. Tesla’s incredible lab was built in order to wirelessly transmit power across great distances, this is believed to be the same reason why the ancient Egyptians built the Great pyramid og Giza, which would explain a lot of enigmas surrounding the pyramid and its purpose.