Inner Earth beings… “They’re a fourth-density being, and apparently they trace their lineage back to the Earth, and some of them, including the Anshar here, back 18 million years.” 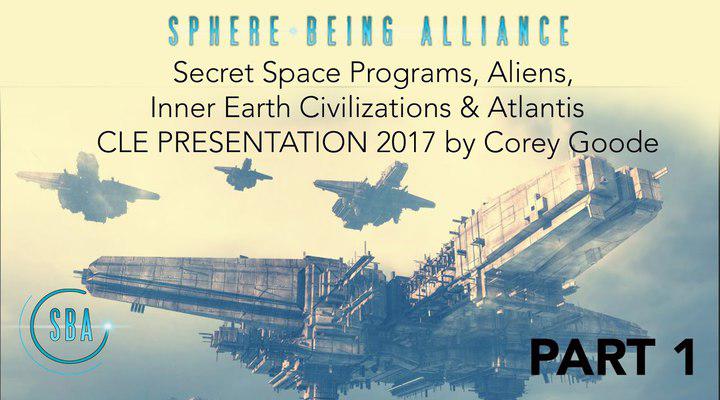 Corey Goode identifies himself as an intuitive empath (IE). According to the Sphere Being Alliance, Corey Goode was recruited through one of the MILAB programs at the young age of six. (MILAB is a term coined for the military abduction of a person that indoctrinates and trains them for any number of military black ops programs.) Goode trained and served in the MILAB program from 1976-1986/87. Toward the end of his time at MILAB he was assigned to fill an IE support role for a rotating Earth Delegate Seat (shared by secret earth government groups) in a “human-type” ET SuperFederation Council.

SCROLL DOWN FOR VIDEO

“When I was first being picked up and taken to these MILAB-type programs, I found myself being slowly introduced to non-terrestrials. You would go into like a virtual reality setting where they put the goggles on you, and you’re sitting in a chair, and there would be a bunch of military and medical people in the room.”

“…And then, when you took the goggles off, there would be a Grey alien sitting at the table. They would just spring it on you. Yeah. They spent years acclimating people to being in the presence of non-terrestrials, because no matter who you are, it’s going to throw you off. We’re genetically programmed to respond viscerally to the non-terrestrials.”

Corey Goode isn’t the only one who has spoken out about the existence of a fully operational secret space program.

Interestingly, a former NASA employee claimed there were secret manned missions to Mars over 20 years ago. In an interview with Coast-to-Coast AM, a woman by the name of ‘Jackie’ talked about humans on Mars, something that has been discussed among other alleged NASA employees for years; ‘…Then I saw two men in space suits – not the bulky suits we normally used, but they looked protective. They came over the horizon walking to the Viking Explorer…’

In addition to the above, a former Marine claims to have even WORKED on Mars.

The retired officer only known as Captain Kaye (pseudonym), said that not only have humans made it to Mars in the past, we have developed a secret space program and flotilla that operates in space. According to the former Marine, he was posted on the red planet for years and his mission was to protect the five human colonies from indigenous life forms on Mars. According to Captain Kaye, not only did he spend years on Mars, but he also served aboard a giant space carrier for three years.

But perhaps the best person to expose everything related to secret programs and shadow governments was Senator Daniel K. Inouye who said: “There exists a shadowy government with its own Air Force, its own Navy, its own fundraising mechanism, and the ability to pursue its own ideas of the national interest, free from all checks and balances, and free from the law itself.”

During the Conscious Life Expo 2017 Goode explained in detail the Secret Space Program:

“When I was almost 17, I was brought into the Secret Space Program (SSP), which I had been groomed for all throughout the MILAB program. They drafted me into Solar Warden. It was my Christmas break, 1986. I was . . . My birthday’s in 11 days, so it’s February 22. It was during December just before my 17th birthday that they brought me in.”

“They assigned me to a research vessel, and the captain did not want me on board. In the past, they had put what he called “children” on board, and they cried for mom, and it took about a year for them to acclimate, and he did not want to go through that. It was too disruptive. So instead, they sent me to the Intruder, Intercept and Interrogation program, where they would use intuitive empaths to interrogate non-terrestrials that they had caught in our Solar System or on Earth.”

“I was in that program for about a year, just under a year. And then they reassigned me back to the Sommerfield. I worked for scientists and engineers. When I was working on the science side with the scientists, they called me a Specialist. And I was a Technician when I was working with the engineers. Who remembers talking about the dart craft coming in my back yard to pick me up?”

Goode isn’t the only one who believes there are civilizations inhabiting lower parts of Earth’s crust. In a new interview by Coast to Coast am, author and researchers David Wilcock stated that an alliance of ancient civilizations is living inside the planet. These ancient civilizations have been calling the inner Earth their home for long periods of time and they are about the reveal themselves to the world. Wilcock explained that during the formation of all watery planets in the universe (and according to latest studies by NASA there are quite a few) hollow cavities are formed below the surface of the crust, with their very own biome with bacteria that is capable of giving off natural light.

Goode further elaborated on the subject during the Conscious Life Expo 2017:

“The Inner Earth. It seems to be probably the most popular topic that I’ve talked about.”

“A lot of you remember me talking about witnessing the city in the deep cavern. This is an animation that Rene created to help depict it. It’s very good. The only difference was the cavern was the size of a state. There’s no way to really accurately depict on scale how large it was. It’s unbelievable. There’s mist up along the ceiling of the cave, cavern.”

“They’re a fourth-density being, and apparently they trace their lineage back to the Earth, and some of them, including the Anshar here, back 18 million years.”

Source and reference: Sphere Being Alliance