According to a new study, ‘Unicorns’ lived in parts of Kazakhstan until 26,000 years ago, meaning that human might have even coexisted with the mysterious animals in the distant past.

The bizarre animals lived alongside humans some 26,000 years ago, proving that there might be truth behind the legendary myth(sort of). The so-called Siberian Unicorn was not as pretty as humans might have imagined the animal in mythological tales, but it proves the creature roamed the Earth fairly ‘recently’.

Referred to by researchers as Elasmotheriusm sibiricum, the ‘Siberian Unicorn’ is believed to have died out in Siberia some 350,000 years ago, but the discovery of a new fossil proves that this mysterious animal was present on Earth much longer than previously thought, living in parts of Kazakhstan until 26,000 years ago. The Siberian ‘Unicorn’ was in fact a giant-sized ancient Rhino, from which ancient man might have developed tales of Unicorns we read about today.

The discovery points that the animal –which would have grown to the size of mammoths weighing some five tons– sought refuge in western Siberia, where they most likely coexisted with human species.

Researchers maintain that humans spread across parts of Asia some 50,000 years ago and moved to parts of what is today Siberia some 35,000 years ago.

According to Dr. Andrei Shpanski, a palaeontologist at the Tomsk State University: ‘Most likely, the south of Western Siberia was a refúgium, where this rhino persevered the longest in comparison with the rest of its range.’

‘There is another possibility that it could migrate and dwell for a while in the more southern areas.’

Scientists discovered fossilized remains of the giant animals skull near the village of Kozhamazhar in the Pavlodar Priirtysh region of north east Kazakhstan. Interestingly, the remains of the ‘Siberian Unicorn’ were discovered alongside fossils of prehistoric bison and mammoths.

According to researchers, based on the discovered fossils, the animal would have reached around 4.6 meters in length, while growing to a height of around 2 meters. Scholars believe the Siberian Unicorns was, in fact, a variant of an ancient rhino, which grew much larger than  the woolly rhinos that were believed to live around the same time. Although researchers did not recover the actual ‘horn’ of the ‘Siberian Unicorn’, studies of the skull show that a bony lump is thought to have supported a keratin horn. Scientists suggest that the animal had long legs which allowed the animal to gallop much like a modern-day horse, rather than the lumbering trot seen in modern rhinos around the world. 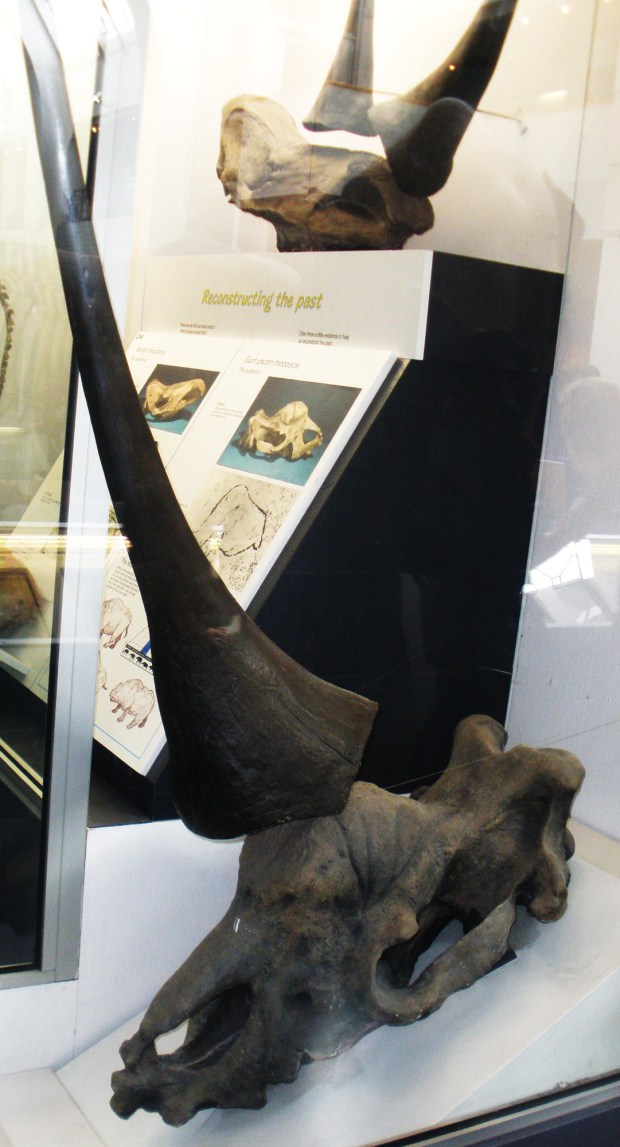 Dr. Shpanski and his colleagues used radio carbon dating to determine the animal was around 26,038 years old – making it remarkably young.

Dr. Shpanski said: ‘Most likely, it was a very large male of very large individual age.

‘The dimensions of this rhino are the biggest of those described in the literature, and the proportions are typical.’

According to Dr. Shpanski, the animals most likely died out due to climate changes in Siberia. This isn’t the first time that researchers have discovered a last ‘refuge’ of a giant ice age species hat died out a long time ago. The study was published in the American Journal of Applied Science.