Archaeologists made a fascinating find in Norway recently by uncovering not just one ancient Viking boat grave, but two. And the mysterious bit is that the man and the woman in the double grave were buried 100 years apart.

Vikings often buried important members of their society inside boat graves, which is a mound that covers a longboat. Some of these boats have even been recovered and are currently on display in Denmark at the Viking Ship Museum.

In addition to the bodies of the deceased, Vikings would bury items they believed a person would need in the afterlife such as jewelry, livestock, and weapons.

As you can imagine, archaeologists get pretty excited when they find a Viking boat grave.

And that’s exactly what archaeologists from the Norwegian University of Science and Technology (NTNU) Museum found at a farm known as Skeiet at Vinjeøra on the side of a cliff. Only they didn’t just find one, they found two.

First, the team excavated the boat grave of a woman who died during the 9th century. With her was buried a brooch that turned out to be a decorative harness fitting that Vikings likely seized during a raid in Ireland.

“The decoration and the design itself tell us that it came from Ireland and that it was once part of a harness fitting,” NTNU Department of Historical Studies researcher Aina Heen Pettersen said in a press release. “It was common among the Vikings to split up decorative harness fittings and reuse them as jewelry. Several fastenings on the back of this brooch were preserved and were used to attach leather straps to the harness. The new Norse owners attached a pin to one of the fastenings so it could be used as a brooch.”

Vikings frequently raided coastal lands in the United Kingdom and continental Europe seeking treasure and new territories to colonize, including Ireland. In fact, the Vikings actually saved Ireland from a steep population decline in the 10th century.

“The Viking voyages – whether for raids, trading or other expeditions – were central in Norse society,” Pettersen continued. “That meant it was important to participate in this activity, not only for the material goods but also to raise both your own and your family’s status. Using artifacts from Viking raids as jewelry signaled a clear difference between you and the rest of the community because you were part of the group that took part in the voyages.”

The brooch is not the only item in the grave. The woman was also buried with a spinning wheel, a pearl necklace, scissors and the head of a cow.

But then the team dug a little bit deeper and were shocked to discover that a man in a similar boat grave had been buried earlier during the 8th century. The woman had been buried in a smaller boat right above him as if the Vikings were reusing the burial mound.

“I had heard about several boat graves being buried in one burial mound, but never about a boat that had been buried in another boat,” NTNU University Museum archaeologist and excavation project manager Raymond Sauvage said. “I have since learned that a few double boat graves were found in the 1950s, at Tjølling, in the south of the Norwegian county of Vestfold. Still, this is essentially an unknown phenomenon.” 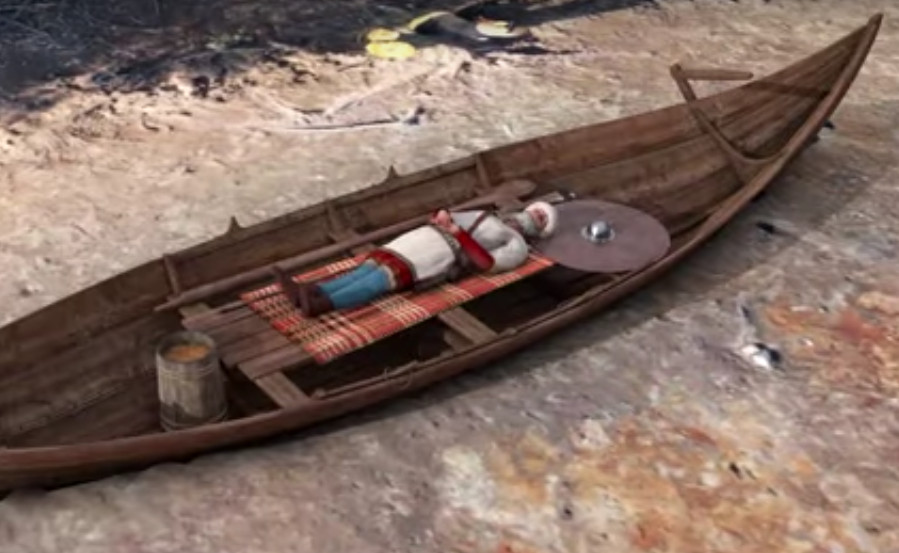 Indeed, what’s even more fascinating is that the man was buried during the Merovingian era, which researchers figured out based on the style of the sword they found in the grave.

“Sword styles change through the centuries, which means we can unambiguously date this grave to the 8th century, the period that is known as the Merovingian era in Northern Europe,” Sauvage said. “That’s assuming that we are not dealing with a Viking hipster.”

The Merovingian kings were a royal dynasty that ruled a large swath of territory in Western Europe, including France from the middle of the 5th century AD to around 751 AD in the middle of the 8th century. And that’s why Sauvage says the mound dates back to that era as well, making it a very rare find.

“The burial mound must naturally be older than the oldest boat grave, meaning early Merovingian age,” he said. “This is a fascinating era in Scandinavian history, from which there are few archaeological finds.”

Sauvage went on to point out that the farm likely belonged to a single family for generations, which means the mound could be a family grave.

“Family was very important in Viking Age society, both to mark status and power and to consolidate property rights,” he said. “The first legislation on allodial rights in the Middle Ages said you had to prove that your family had owned the land for five generations. If there was any doubt about the property right, you had to be able to trace your genus to haug og hedni – i.e. to burial mounds and paganism. Against this backdrop, it’s reasonable to think that the two were buried together to mark the family’s ownership to the farm, in a society that for the most part didn’t write things down.”

Further evidence that the two share a familial relationship is that the woman’s brooch is also from the Merovingian era, possibly being passed down through the years.

“So far, we’ve found part of a brooch from the Merovingian era, indicating that the large burial mound once held a richly appointed woman’s grave,” Sauvage said.

However, only DNA testing will tell us for sure.

“We hope we will be able to get some DNA from the skull to provide us with more information, such as what she looked like,” he said.

And we also know that these individuals must have been particularly important because of where the mound is located on the property.

Anyone who looked up at the cliff from the fjord would have seen this burial mound, almost certainly ensuring that the family would be remembered and revered.

Either that or they just wanted a nice view in the afterlife.

Once again, researchers have found Viking boat graves, which seem to be less rare these days, especially as technology improves. Unfortunately, the mound had been plowed over by farmers for hundreds of years, which is why it had not been found sooner. And this is just one part of the mound. There could be more in the center and the other sides. It’s just a matter of excavating the site further. Until then, we must wait in anticipation.