Mind-boggling documentary shows connection between ancient sites and the Stars 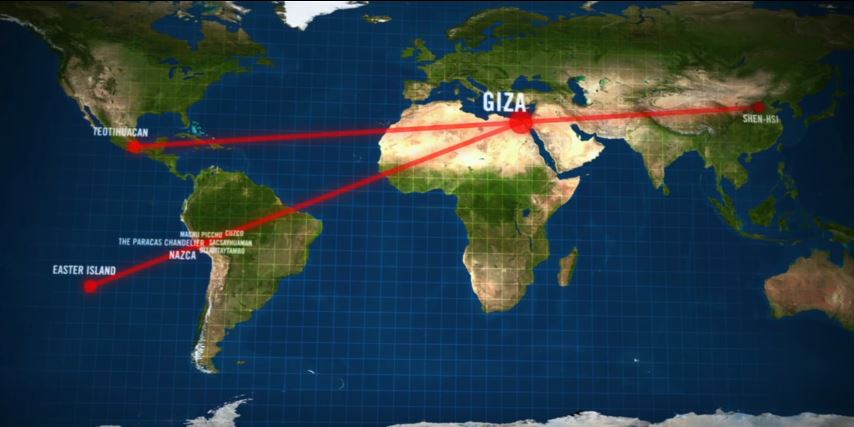 There are numerous sites on Earth that show a correlation with the stars. You only have to look at the Pyramids of Giza, Ollantaytambo, Nazca, Easter Island, and others to sites this mind-boggling connection that tells an incredible story ignored by millions.

You won’t read about these alignments in history books.

Perhaps one of the best examples –according to many— is the Great Pyramid of Giza and its curious position on Earth. For those of you who didn’t know, the Great Pyramid of Giza is the most accurately aligned structure in existence and faces true north with only 3/60th of a degree of error. Furthermore, the weight of the pyramid is estimated at 5,955,000 tons. Multiplied by 10^8 gives a reasonable estimate of the earth’s mass. As you can see, ancient structures were built with a mind-boggling precision.

Just how did the ancient Egyptians discover a relationship between Pi, Phi, the meter and the cubit? How is it possible that the Pyramids of Giza, together with other ancient sites on Earth form a nearly PERFECT circle our planet?

Can the placements of these sites be attributed to mere coincidence? Were these sites placed randomly by the ancients? Or is it possible that ancient civilizations such as the Egyptians, the Maya, Olmec, Inca and others that existed before them placed their cities, temples, and monuments on specific locations on the surface of Earth, creating a mind-boggling global connection that has only recently been discovered by researchers?

The truth is that ancient civilizations on Earth were far more advanced than what we are crediting them for. The ancients achieved incredible feats thousands of years ago, and some of these cannot be replicated by modern society. This tells us that there is perhaps a lost part of history, something we are unaware of that allowed ancient cultures to erect some of the most fascinating sites on Earth with technologies totally different than what we possess today.

The following documentary –called The Revelation Of The Pyramids— perfectly illustrates this global phenomenon.

Coincidence or not? What do you think?