Mohenjo-Daro: An ancient city destroyed by a nuclear attack thousands...

Is it possible that Mohenjo-Daro – an ancient city that belonged to the Indus Valley Civilization- was destroyed by a nuclear attack thousands of years ago? 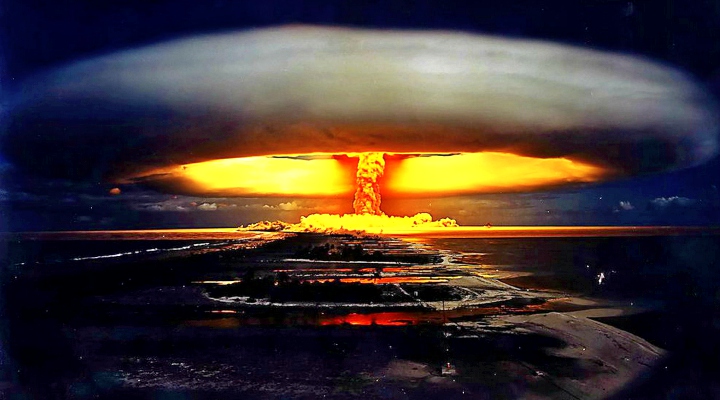 Only seven years after the first atomic explosion in New Mexico, theoretical physicist Robert Oppenheimer, one of the people often named as “father of the atomic bomb” was giving a lecture at the University of Rochester. On that occasion, a student asked him if the first nuclear device that went off was the one at Alamogordo, during the Manhattan Project. Dr. Oppenheimer respond: Well … yes. In modern times, yes, of course.

What did Dr. Oppenheimer want to say? If we look at the theoretical physicist’s answer literally, it means that in ancient times nuclear bombs –or variations of them— existed among ancient civilizations.

Consequently, this brings us to one of the most important questions most of us have tried never to ask: Was mankind visited in the distant past by other civilizations beyond earth. And if so, did these ancient civilizations really have advanced technologies like nuclear bombs?

In modern-day Pakistan, in the vicinity of the banks of the Indus River, we can find one of the most enigmatic archaeological sites on the surface of the planet –which once belonged to one of the oldest civilizations on the planet, the Indus Valley civilization— Mohenjo-Daro.

Together with Harappa located some six hundred kilometers further northeast, Mohenjo-Daro and Harappa are two of the most prominent ancient cities that belonged to the Indus Valley Civilization.

Interestingly, if there is something surprising at Mohenjo-Daro, then it is the complete absence of buildings that can be identified as temples or palaces or any kind of symbolism that may be associated with such.

Archaeologists sustain that all buildings follow a uniform pattern, highlighting its construction in adobe bricks with no ornaments and windows, all within an urban planning far more advanced than that of any other ancient civilization thousands of years ago, with wide avenues and straight roads (many of them perfectly paved), with rectangular buildings which were all equipped with a network of drainage systems, canals, pipes and sewers, etc.

Interestingly, just as the ancient Sumerian civilization, the Indus Valley seemed to have emerged all of a sudden, without any trace of an earlier evolution prior to the apparition of Harappa and Mohenjo-Daro.

But if the appearance of such amazing civilization remains a mystery, their disappearance is even more fascinating and was initially attributed to the arrival of invading peoples of Indo-European origin.

But many researchers argue that something entirely different happened at Mohenjo-Daro.

We only have to take a look at ancient Vedic texts, a set of antique Sanskrit writings which are considered legacies of the gods, where we find references which may help get to the bottom of the numerous mysteries that surround Mohenjo-Daro and the Indus Valley Civilization.

One of the ancient texts, the Mahabharata, an extensive poem of some 215,000 verses details events that occurred in the city of Mohenjo-Daro where both gods and mortals were wrapped in an epic war, overshadowing the remote origins of the city since the Mahabharata places the ancient city in the years 3103 BC during the Kali Iuga or ‘Black Age0 –a kind of apocalypse that occurred in the distant past that modified much of the ancient history of India.

There are hundreds and hundreds of unanswered questions, but there are ancient texts that offer many answers despite being considered as heretic and misinterpreted by modern scholars.

Interestingly, many ancient texts shed light onto the numerous enigmas of history and if not almost entirely, they illuminate the path of a truly untold story that bends the possibilities of our written history.

As we mentioned above, one of such texts is the ancient Mahabharata.

“Gurkha, flying a swift and powerful vimana,
hurled a single projectile
charged with the power of the Universe.

An incandescent column of smoke and flame,
as bright as ten thousand suns,
rose with all its splendor.

It was an unknown weapon,
an iron thunderbolt,
a gigantic messenger of death,
which reduced to ashes
the entire race of the Vrishnis and the Andhakas.

The corpses were so burned
as to be unrecognizable.

Hair and nails fell out;
Pottery broke without apparent cause,
and the birds turned white.

…After a few hours
all foodstuffs were infected…
…to escape from this fire
the soldiers threw themselves in streams
to wash themselves and their equipment.”

“Dense arrows of flame,
like a great shower,
issued forth upon creation,
encompassing the enemy.
A thick gloom swiftly settled upon the Pandava hosts.
All points of the compass were lost in darkness.
Fierce wind began to blow
Clouds roared upward,
showering dust and gravel.

Birds croaked madly…
the very elements seemed disturbed.
The sun seemed to waver in the heavens
The earth shook,
scorched by the terrible violent heat of this weapon.

Elephants burst into flame
and ran to and fro in a frenzy…
over a vast area,
other animals crumpled to the ground and died.
From all points of the compass
, the arrows of flame rained continuously and fiercely.” — The Mahabharata

According to many researchers, this controversial ancient text perfectly describes the use of nuclear weapons 5,000 years before the Americans utilized them on the cities of Hiroshima and Nagasaki.

Similarly, there are plenty of texts that relate to all kinds of details that illustrate the existence of airships (vimanas) and rockets or missiles capable of reaching long distances.

While as always we must remain with a minor sense of skepticism, we can argue that the above-mentioned text is not original, or its translation is not the most accurate. However, there are many other details that point towards an abrupt end of the inhabitants of Mohenjo-Daro.

It is necessary to mention there is a great contradiction when assessing the reasons and causes that could have caused the sudden disappearance from the maps of an ancient city like Mohenjo-Daro.

Although on one hand it has been speculated that a possible invasion resulted in the slaughtering of its people at the hands of invading hordes, archaeologists have only found around 30 skeletons in the streets. The obvious question we need to ask here is: Where is the rest of the population then? Where does the name ‘mound of the dead’ come from?

Is it possible that most of the population of Mohenjo-Daro escaped before the terrible invasion?

While invading forces is one theory, some archaeologists speculate that the city may have been abandoned due to a sudden change in the course of the Indus River, some tie around 1700 BC, but it does not explain other mysteries that surround Mohenjo-Daro.

Although very few skeletons found, it seems that death came to them very quickly.

Interestingly, there is a so-called epicenter of around 45 meters in diameters at the center of the city where the terrain and buildings appear to be crystallized as if they were exposed to a massive heat source.

On the buildings located near the center of the city, researchers have found that the bricks of the walls that are faced towards the exterior and looking away from the epicenter are also fused or melted.

However, this could have only been achieved, according to researchers, by exposing the buildings to a temperature of above 1500 ° centigrade.

What kind of weapons could have caused such devastating effects on both people and the surrounding buildings? Is it possible that as some people sustain, Mohenjo-Daro was really destroyed by a nuclear explosion?

Due to the fact that this hypothesis is considered extremely sensationalist and many believe it to be impossible, there isn’t a single serious study which tackles the presence of radioactivity present at the location of the city of Mohenjo-Daro.

The presence of objects and surfaces which appear to be melted or fused have been associated with forces of nature as observed in other locations such as Scotland, Australia and Egypt, all product of rays and electric arcs of great power.

Regrettably, as with other discoveries that challenge our history, many researchers have ignored the numerous mysterious surrounding Mohenjo-Daro and have not tried to answer the mysteries behind its sudden disappearance and fascinating history.

When you think about Mohenjo-Daro and mention it in the same sentence with Nuclear Weapons you would then be called a conspiracy theorist.

Interestingly not only are Harappa and Mohenjo-Daro the only locations were we can discuss this extravagant hypothesis and question whether it is plausible, there are several locations where researchers have detected the “footprints” of what they are calling ‘possible nuclear explosions in ancient times’.

As it turns out, there are at least three major points in the area between the mountains of Rajmahal and the Ganges River where scientists have spotted large layers of ash and a presence of radiation which is higher than the average normal.

But stay curious and ask questions no one else is willing to ask, stay focused and always come to your own conclusion, Who knows, maybe after all the secrets of the atom and nuclear power were known to the ancients thousands of years ago.