The Curious Case Of Immortal Putin

Have you come across these images before? It’s not the first time that a conspiracy theory claims that a world leader is either a time traveler or immortal. This time it seems that the internet has taken a particular interest in Russian President Vladimir Putin, who some claim is the ultimate time traveler.

This time, people have spotted an eerie similarity between Vladimir Putin, Russia’s President, and two historical photographs taken in 1920 and 1941 respectively.

Conspiracy theorists claim that the images are the ultimate proof of either time travel or immortality. 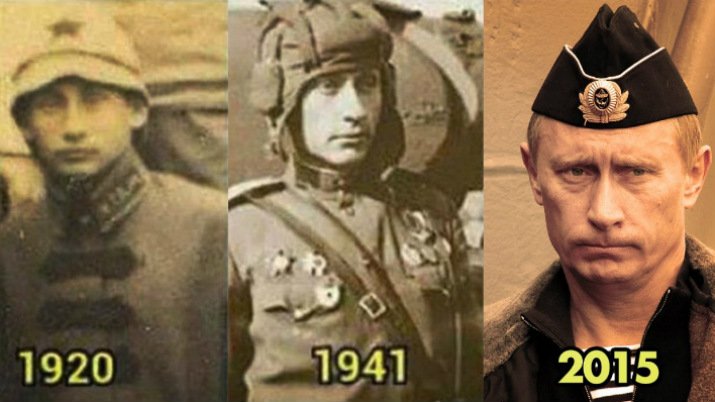 Astonishing claims made on social networks suggest that the two historic images taken in 1920 and 1941 are in fact today’s Russian President Vladimir Putin. The photos, claim conspiracy theorists, are evidence of a slightly younger version of Putin, who is 65 years old.

People have discussed the images for quite a while now and come up with all sorts of ludicrous theories trying to explain them. Some believe the almighty Russian president is, in fact, immortal, and others have come forth saying the man is some sort of creature. Although they didn’t really explain what they meant by a different creature.

Others believe that the images are proof that Putin is a time traveler, and that such people exist among us.

For now, the conspiracy community seems to love the idea that all three images are in fact of the same person, and that Putin, the Russian President is immortal, and has been serving the Russian people for centuries.

Time travel—for now—is out of the equation as scientists have said we can’t really build a machine that would allow us to manipulate space and time, hence giving us the ability to travel from one reality to the other.

And while conspiracy theorists have proven that explanations are many, no one seems to have—apparently—thought of another more simpler explanation:

Two Russians, living in Russia, who perhaps share a common DNA, and look like their ancestors. Makes more sense than a time-traveling immortal Vampire, right?

After all, it is believed that everyone on Earth has their very own lookalike somewhere out there.