Ancient Engineering mysteries: How did Ancient Mankind move and cut...

So basically spread all over our planet, ancient sites reveal engineering mysteries that mainstream scientists believe were achieved with slave labor and simple tools but let’s be realistic, is that really possible? Is that the most logical explanation to all of these construction marvels?

Basically archaeology today tells us that all of these ancient civilization all over the world accomplished these amazing constructions as advanced as they are with sticks and stones, while today if you look at our methods of building and engineering, we need power tools and power machines to be able to move and manipulate stones and structures and even then we have a hard time performing certain tasks, so this explanation that mainstream archaeology gives us doesn’t seem to be logical at all, or something is missing in the puzzle.

In February 2012. At the Stone Valley Materials Quarry in Riverside, California, a massive 680,000-pound granite monolith was prepped to travel over 100 miles to become part of an exhibit at the Los Angeles County Museum of Art.

Workers from 100 utility crews, a 1.4 million pound crane, and a 44-axel tractor-trailer rig with over 2400 horsepower were needed to move the one rock. Today’s technology is barely able to handle these types of “rocks”, movement, logistics, and all of that makes it very difficult to believe that ancient builders were able to do this with their technology thousands of years ago. The boulder, called “Levitated Mass,” is a gigantic payload by modern construction standards… but it is small when compared to many of the solid blocks moved by ancient builders.

It is almost impossible to take the 340-ton rock and move it without modern-day technology, and so we raise the question how did our ancestors move monoliths, some over five times the size of Levitated Mass without the aide of high-powered machines? Researchers believe the ancients not only used power to move a solid stone but to cut it as well.

Ollantaytambo, Peru. The walls of this ancient mountain stronghold tell the story of what some experts believe to have been thousands of craftsmen, shaping and cutting solid stone with a precision that today could only be matched with high-powered machine tools.

We find huge cube-like sections of stone that have been removed from the mountain with such accuracy that we can’t find a scratch on the surface. The corners of these “blocks” are not sharp but they’re perfectly rounded and no one can explain how this could have been achieved in that particular time in human history, without any written evidence of some kind of technology that could have helped achieve these wonders. The ability to fit perfectly fitting stones of several tons in weight together so that a single human hair can’t fit in between them is not a question of sweat or man hours but is definitely a question of technology. Is it possible that the ancient civilizations around the world have had help from beings not from this world? If not, then how could you explain these constructions, monuments and, holy places, that defy our very own technology? Could it be possible that electricity and elements such as fire have been discovered before than written history states? 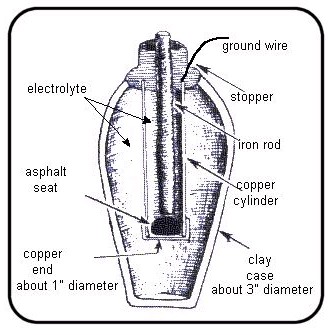 In 1938, at the National Museum of Iraq, the museum director finds terra-cotta pots and copper cylinders in the archives that may have been used as galvanic cells. The nearly 2,000-year-old devices called “Baghdad Batteries” are believed to predate the invention of the cell battery by more than 1,000 years.  Archaeologists speculate they may have been used to electroplate gold onto silver for decorative jewelry. “The Baghdad Battery that we’ve currently found in Iraq can generate around four volts. A current modern-day flashlight could be run by a nine-volt battery. if we think of a Baghdad Battery around this size producing four volts, what if we increased the size to around six feet? That might generate 20, 30, 50 volts and have the sufficient power to actually utilize energy in a way that we do today”. – Jason Martell.

370 miles south of the Giza Plateau stands the Hathor Temple Approximately 4,000 years old, the halls of this monument are lined with curious images. researchers call it “The Dendera Bulb.

“What’s interesting about this bulb is the fact that on the wall relief, we see the bulb is plugged into what appears to be a power source.”- Jason Martell.

So when we look at images like the ones found in Egypt, we study the “Baghdad Batteries,” we start to ask ourselves is it possible that Ancient civilizations in Egypt, South, and Central America had the ability to obtain electricity somehow, and if they did, from where did they acquire this knowledge? With so many questions still in the air, the only thing left to do is to study and gather further evidence of these examples of ancient technology and try to understand where did our ancestor obtain it from.