Researchers find a rock with a carving of a Mastodon...

Another incredible discovery has been made as researchers have found a rock carving of a Mastodon at the underwater Stonehenge of Lake Michigan.

In 2007, at a depth of twelve meters, researchers found a peculiar set of aligned stones that are believed to be over 10,000 years old.

While searching for shipwrecks, archeologists from the Northwestern Michigan College came across something interesting at the bottom of Lake Michigan. They found mysteriously aligned rocks placed there by ancient man before water covered the area. Researchers couldn’t believe what they were seeing upon making the discovery. It’s America’s Stonehenge.

According to researchers, the stones located at the bottom of Lake Michigan all measure the same distance across, something that wouldn’t be present if we were looking at a natural formation. The rock formation found at the bottom of Lake Michigan resembles other structures found in England and France, and even those at Nabta Playa, making it very unlikely to be a natural formation.

As if the mysterious rock formation wasn’t enough, after a diving expedition was put together to look at the stones, underwater photographer Chris Doyle found a mysterious stone with an incredible depiction of what appeared to be a Mastodon, suggesting that the carving must have been made way before the Mastodons were extinct about 10,000 years ago. 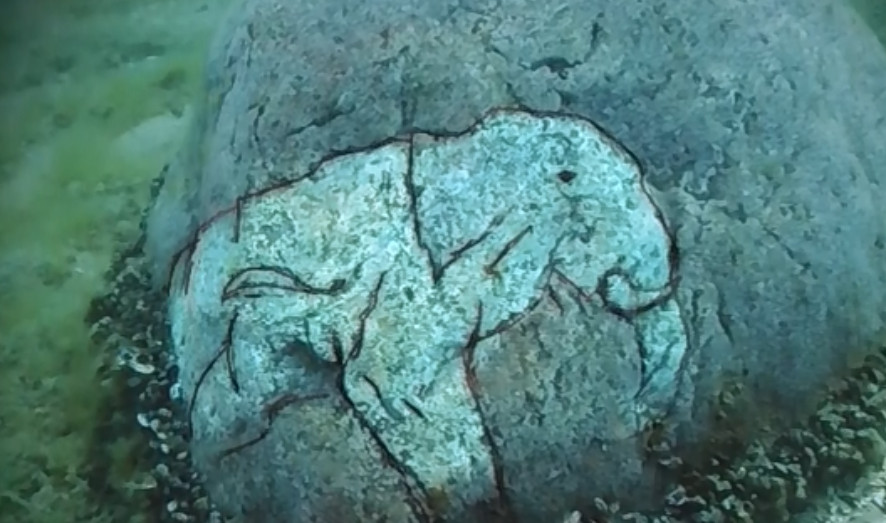 The Mastodon rock is perhaps one of the most incredible features of the underwater Stonehenge. Researchers speculate that the rock is made out of granite, a very hard material. For people to carve something onto this stone, they had to use a tool harder than granite. So the logical question is: What could ancient mankind have used 10.000 years ago to carve something onto a granite rock?

Researchers stress that the marks and lines that make out the mastodon figure were precisely carved, the lines were not just “scratched” onto the rock.

The incredible rock formation and the correctly aligned stones circles clearly indicate a man-made structure. The areas around Michigan are a witness of early human presence in the American continent which is believed to date back over 25.000 years. In the distant past, the Lake itself did not exist since an Ice Age ruled over the lands and what is now located at the bottom of one of the five Great Lakes of North America, was once on dry land.

The man responsible for this underwater discovery is Mark Holley, professor of underwater archeology at the Northwestern Michigan College. In 2007, he searched for shipwrecks but found, 12 meters below the surface a series of stones arranged in a circle. Adding to this amazing discovery is a relatively large rock which has, on its surface a depiction of a mastodon, an animal that became extinct around 8000 BC.

In the region near Lake Michigan, researchers have previously discovered menhirs and petroglyphs. When the first Europeans arrived in the seventeenth century, they found that Michigan had thousands of prehistoric mounds. Scholars also found “sacred stones” across the geography of the Great Lakes, stones according to the natives were placed by another race who lived there before. Statues and stone idols erected in various parts were discovered weighing over 100 kilograms.

The underwater Stonehenge of Lake Michigan must have been created before the last Ice Age when the lake bed was dry, and that is, according to researchers, over 12.000 years ago, a time that according to history, mankind couldn’t erect such elaborate constructions.

What does this tell us about history? Is this another piece of evidence that points to the fact that history books, as we know them should be rewritten? We believe yes.