Study finds that Ancient Aztecs and Incas are genetically related...

After nearly a century of speculation and theories, an international team of geneticists has obtained conclusive evidence proving that the Incas and Iroquois are closely related to people of Altai, a Siberian region that borders China and Mongolia. 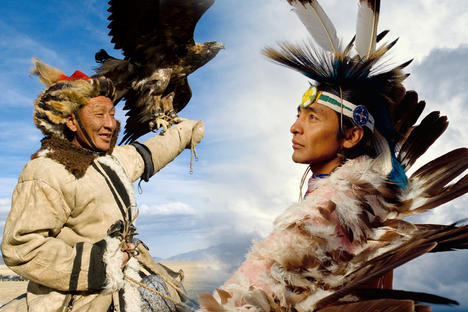 The study proves how ancient Aztec’s, Incas, possibly Pre-Inca cultures, Iroquois and other natives of the Americas are closely related to people near the villages of Altai in Russia.

According to a study performed by a group of international geneticists, ancient civilizations such as the Aztecs, the Incas, Iroquois and other American cultures are closely related to villages of Altai, a Russian region located between Siberia, China, and Mongolia. However, the idea that these people are related isn’t a new theory and has already been considered as a possibility by numerous researchers dating back  a century at least.

The idea that people from Siberia and surrounding area migrated through northeastern Russia and Alaska, to America, is something that has been suspected for a century by numerous researchers. However, until today, no one had managed to prove it. Now, thanks to Russian geneticist Oleg Balanovski, this migratory theory has been scientifically corroborated.

Dr. Balanovsky’s research also proved that some Native Americans have kinship with the indigenous populations of Australia.

“The current study confirms the theory that the Altai peoples are closely related to Native Americans,” said geneticist Valery Ilyinsky at the RAS Institute of General Genetics. ”We now have clear proof, and it is useless to contest it.”

Through the comparative study of Native Americans and their Siberian ancestors, contrasted with the rest of the world, researchers were able to establish that the ancestors of Aboriginal peoples, like the Aztec and  Inca, arrived at the ‘New World’ possibly over 30 thousand years ago, from Siberia.

However, the results of the study led to another great discovery:

“Besides Siberian ancestors, some Native Americans showed a puzzling relation to the indigenous peoples of Australia and Melanesia in the Pacific Ocean,” remarked Dr. Balanovsky. “This is astounding because they are located in an almost opposite part on the planet.”

It is somewhat surprising, as these regions are almost diametrically opposed, “says Balanovski.

According to rbth.com,  Scientists already know how humans traveled to the Americas from Altai. “Instead of the Bering Strait there was a land bridge [30,000 years ago], because during the Ice Age much water was locked in glaciers and the level of the world’s oceans was lower,” Dr. Balanovsky explained.

He added that it’s still not clear whether migration from Australia and Melanesia to the Americas was direct across the ocean, or by going up along the coast and via the Aleutian Islands. Archaeologists continue to study this issue.