The mystery of the 6000 year old Inga Stone 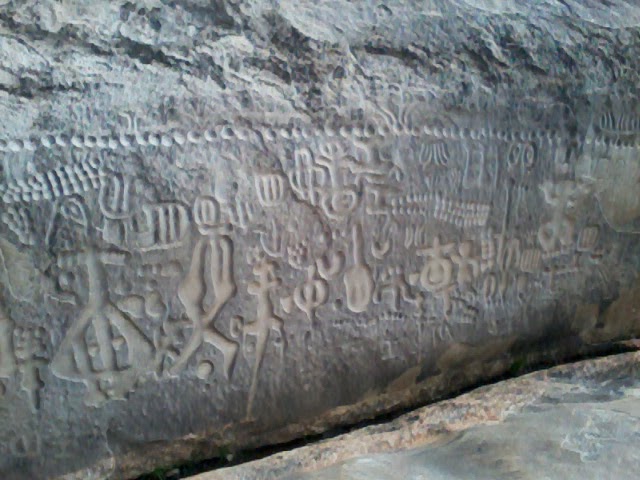 Located in the middle of the Inga River, not far away from the Brazilian city of Inga, stands one of the most interesting archaeological findings in Brazil. Also called the Itacoatiara do Ingá its translation is a stone in the Tupi language. The inga stone covers an area of two-hundred and fifty square meters. It is a vertical construction of 46 meters long and up to 3.8 meters high. The Inga stone displays carvings that are even today waiting to be deciphered. Researchers have found several carvings, figures, fruits, animals and other unknown figures, but most importantly carved on the Inga stone are the Milky way and the constellation of Orion.

According to research, this incredible archaeological site located in Brazil dates back at least 6,000 years. It is one of the main attractions for archaeologists and anthropologists around the world. The inga stone is a geological formation from Gneiss ( a common and widely distributed type of rock formed by high-grade regional metamorphic processes from pre-existing formations that were originally either igneous or sedimentary rock.) It is often foliated (composed of layers of sheet-like planar structures). The foliations are characterized by alternating darker and lighter colored bands, called “gneissic banding”.)

The carvings of the Inga Stone remain a mystery but some symbols have been identified and accepted throughout the archaeological community. Some researchers argue that the Inga Stone has a Phoenician origin, but this theory has not been confirmed.

Brazilian researcher Gabriele Baraldi has spent a great time in studying the encrypted messages at the Inga stone, according to his theory, the Inga Stone carvings are proof of unknown ancient technology.

Even though it is a beautifully designed complex, it is not unique as the geometrical style of the Inga Stone is present in other Brazilian engravings that have a very similar style, but none of them are as famous and interesting as the Inga Stone.

Archaeologists state that the engravings on the stone have been performed with incredible precision and the details reveal a superb technique used by very skilled artists who certainly were very gifted and capable of creating these amazing engravings.

There are numerous rocks that are found around the Inga Stone, but none of them match nor resemble the style used at the Inga Stone, making it a unique product of ancient craftsmanship.

Like many other monuments around the world, the Inga stone has suffered vandalism. Many other stones in the vicinity were destroyed in the 1950s to pave the streets of the state capital of Paraiba. Weather conditions and other factors are also to blame. The Inga Stone has lost many of its original symbols due to the fact the engravings have lost thickness. These unusual but aesthetically unusual engravings are proof of technically sophisticated methods which has led researchers to question the origin of these engravings.

Researchers suggest that the native Indians lacked metal tools to be able to record the engravings on the stone, some researchers have postulated that the engravings of the Inga stone were created by the Phoenicians or aborigines of Easter Island. Symbols of the Inga stone show a degree of stylistic resemblance to symbols found at Easter Island with both of them representing curved style geometry but according to researchers, this is the only similarity found between them.

Even though one can find the resemblance of geometrical shape between the Inga Stone and other ancient cultures, it does not necessarily point towards a connection between the cultures. Some researchers have even proposed that the Inga Stone is proof of extraterrestrial contact.

The Inga stone is related to celestial phenomena due to the fact that several constellations have been depicted on the surface, making it one of the oldest astronomical records found in Brazil. From the study of native tribes of Brazil, researchers have concluded that Brazilian natives were generally related to supernatural animals, the representation of stars and constellations was not a frequent practice by native Brazilians.

For the Ticunas from Eastern Amazonia, the celestial phenomena are highly related to the “footprints left by manuals that now inhabit the heavens”. Researchers state that depictions of stars and celestial objects are more connected mythologically than astronomically, but this is an ongoing debate between researchers.