The Mystery of the Ark of the covenant

The Ark of the Covenant is the ornate, gilded case believed to have been built around three thousand years ago by the Israelites to carry the stone tablets of the ten commandments.

According to the Book of Exodus, after the Israelites were released from Egypt, God summoned Moses to the peak of the holy mountain giving him two stone tablets that were carved with the ten commandments, God also provided Moses with exact instructions to build the Ark of the Covenant.

The Ark of the covenant did not only carry the ten commandments of God, but it was said to be the throne of God himself, wherever the Ark of the covenant went, God was present. According to the Book of Exodus; the dimensions and characteristics of the Ark of the Covenant are 2½ cubits in length, 1½ in breadth, and 1½ in height which is approximately 131×79×79 cm or 52×31×31 in.

The entire Ark was plated with gold, and a crown of gold was put around it. Four rings of gold were attached to its four feet, two on each side and through these rings staves of shittim-wood plated with gold were placed to carry the Ark. these were never to be removed. A golden cover was placed above the ark; also called kapporet. After this mysterious Ark was built, and the ten commandments placed into it with Aaron’s rod, a jar of manna and Torahs scroll, the Israelites carried it with them during their forty year trip across the desert.

The ark of the covenant was very powerful, but it was not allowed to be touched and only priests could carry it. Those who carried the Ark, could not see what they were carrying as it was covered and hidden from sight. It was considered as a type of bodyguard for the people who carried it, protecting and providing for them in their journey.

The Ark of the covenant was also a very dangerous relic, even though it could sustain life, it could also destroy.

In 1400 B.C. the Jordan river was witness to the might of the Ark of the Covenant. Joshua was given the task to lead his people across the River; this religious relic had to go first, and it is said that the Ark of the Covenant had to go first and as it was carried into the river, the waters stopped flowing. Today, when we think about the description we wonder, is that really possible? A religious relic leading a nation and performing miracles on the way.

What was the Ark of the covenant exactly? Was it truly an ancient religious relic with immense powers? Or is there more to the ark then what we know? What exactly is it? This mysterious golden chest has been the center of ancient religion. Archaeologists have been searching for this mysterious object for centuries but no one has been able to find it so far.

Near the settlement of Beit El, archaeologists made important discoveries that are believed to be connected with the Ark of the covenant. They unearthed clay pots, stoves, buildings but most importantly, they found holes carved into solid rock. Based on the location, researchers believe that these holes may have once held the wooden beams that were actually used to support the Tabernacle at Shiloh. The Ark of the covenant is such an important religious icon that there are replicas of it in churches, synagogues, and Masonic temples.

The Ark of the Covenant proved to be extremely useful in many occasions. According to the Book of Joshua, when the Israelites arrived on the banks of the Jordan River, they came upon the mighty city of Jericho and its impenetrable walls. The Israleites were told by God to march around the walls of the city of Jericho for six days, and on the seventh day, God commanded them to blow the ram horns, the shofar and it would make the mighty walls crumble before them, and after they did this, the walls of Jericho collapsed. It is important to say that this battle is not supported by archaeological evidence. Many scholars also believe that the Book of Joshua hold little historical value. 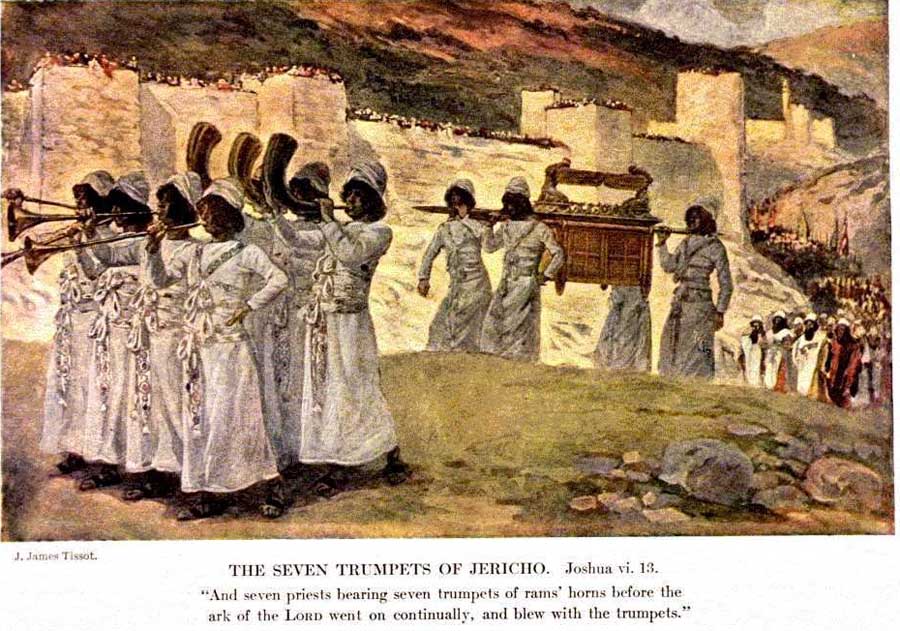 Hundreds of years after the battle of Jericho, according to the Book of Samuel, around 1100 B.C. the Israelites went to war with the mighty army of Philistine, bringing the Ark of the Covenant with them to battle. Since God did not order them to go to war against the Philistine army, God awarded victory to the Philistine army who captured the Ark of the Covenant, as it angered Him that they believed they could use the Ark as a weapon without His orders. 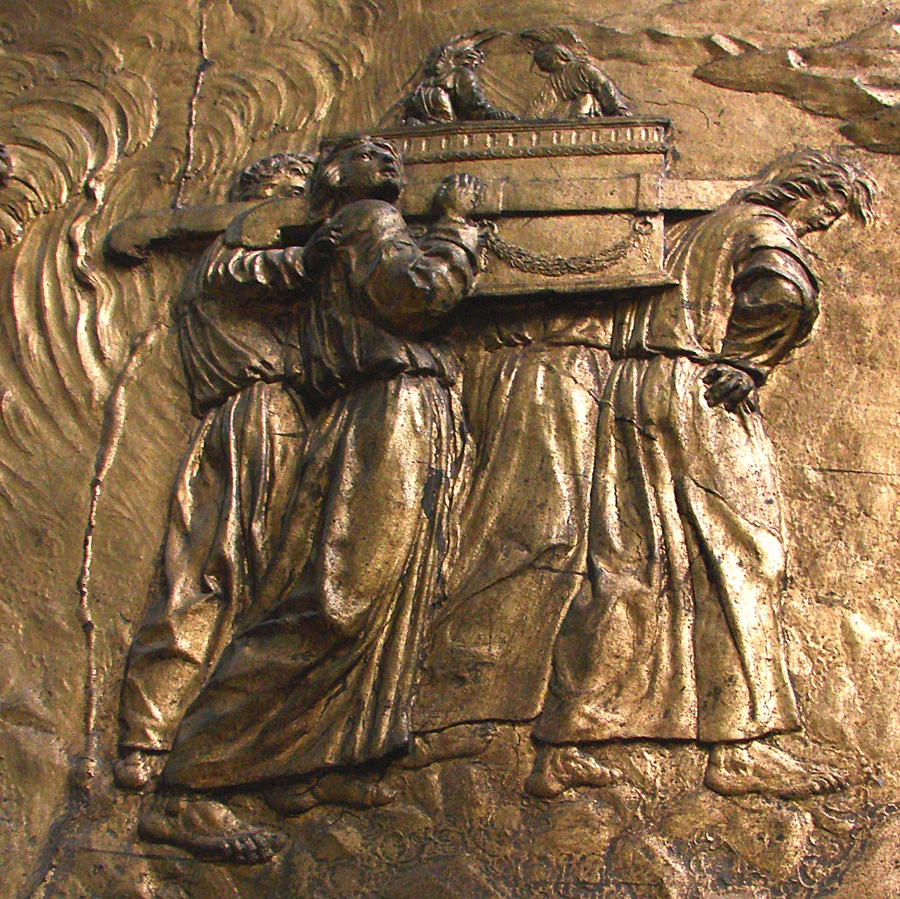 According to history, the Ark was placed in a sanctuary next to a statue of their god Dagon, when they returned it is said that Dagon’s head was decapitated with his hands having been cut off. After this, they decided to return the Ark to the Israelites and sent the Ark of the covenant to a village called Beth Shemish.

The question many have asked is why would the Ark of the Covenant have such powerful powers? To help and damage alike, and why was the Ark of the covenant such a sacred “device”, was it just because it represents the throne of God? Or is there something more to it?

Some believe that the Ark of the covenant was a sophisticated device capable of many deeds but unsafe for the hand of humans.

The priests who carried the ark of the covenant had special attire when coming close to the Ark; they had to wear protective “gear”, for the head, the lungs, heart and other important areas of the body. This tells us that the Ark of the covenant was possibly hazardous.

Where is it now?

No one knows exactly where the Ark of the Covenant is located, throughout history several places have been proposed but so far, no one has been able to prove the existence of the ark nor reveal its location. some have proposed that the Ark of the covenant made its way to Japan and that it was buried in Mount Tsurugi. Japanese historian Takane Masanori even performed excavation on Mount Tsurugi in search of the Ark, but these were canceled years after due to environmental reasons, but the Ark wasn’t located.

Other theories state that the Ark of the Covenant was discovered in Jerusalem and was taken away by the Knights Templar; legends say that it is possible that the Ark is located beneath the Chartres Cathedral in the crypt, while others state it is buried in the Languedoc region.

Another legend states that the Knights Templar took the Ark of the Covenant to Scotland to the Rosslyn Chapel but that is a theory, that like the others has not been corroborated.

One of the most accepted theories so far is that the Ark of the Covenant inst actually hidden, but is located in a well-guarded place, in Aksum, Ethiopia at the Church of St. Mary of Zion. There, a solitary monk, who is not allowed to leave the place where the ark is located has the duty to look after the church’s holiest relic. The monk who has this duty devotes his entire life to the safekeeping of the Ark and is a job he does until his death. Some say that the monks who guard the Ark in the Church of St. Mary of Zion have a relatively short lifespan. 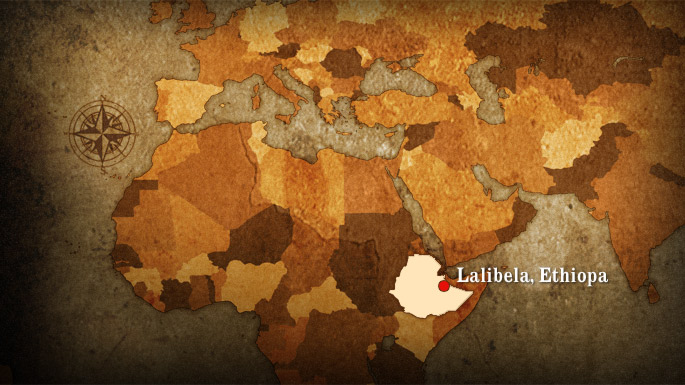 These are just some of the theories regarding the resting place of the Ark of the Covenant, the truth about its existence and location is a secret that will always remain hidden.