The secret power of the Pyramidal shape 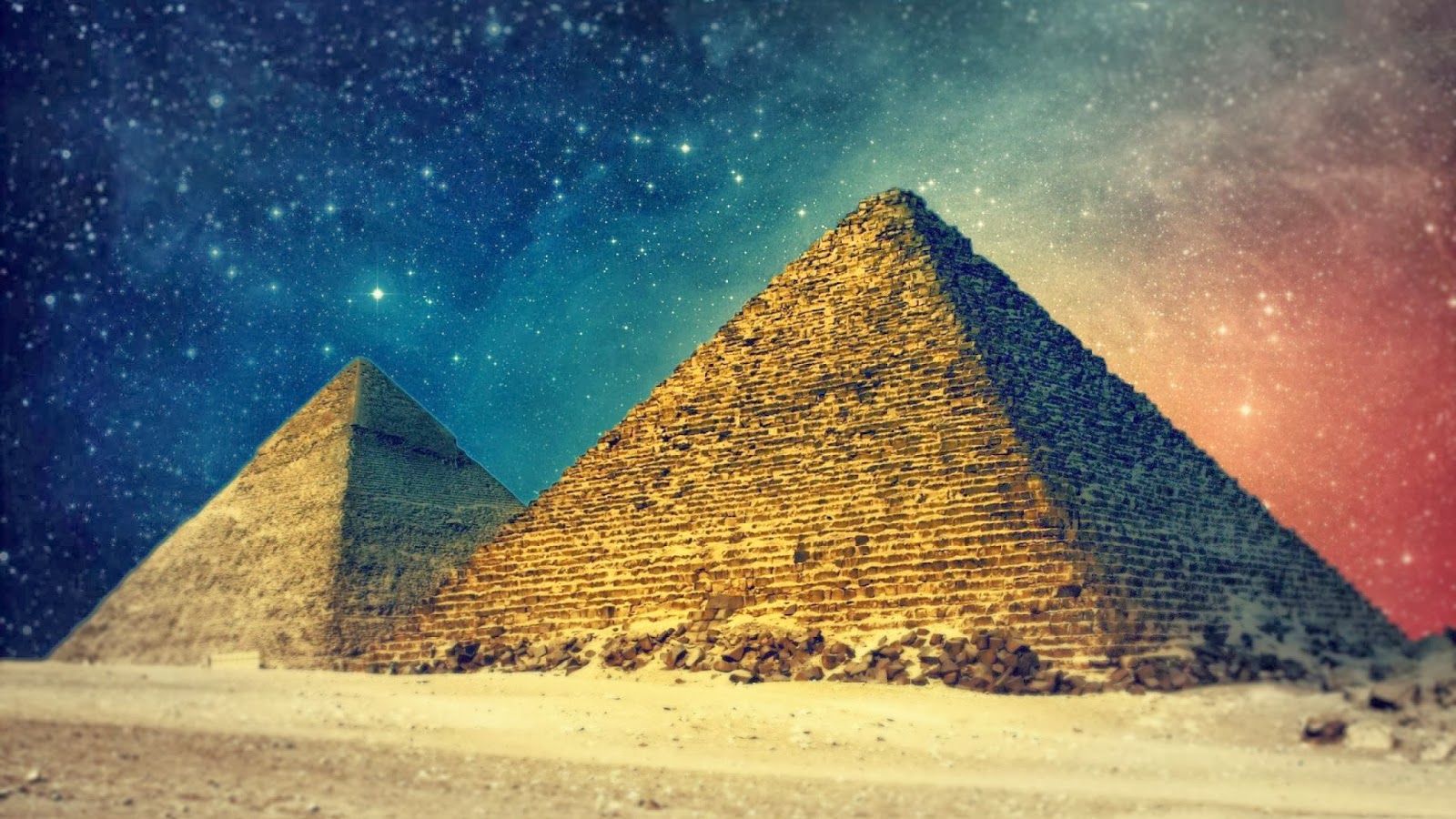 Why does the pyramidal shape resonate various energy fields?

The very shape of the pyramid is an amplified-receiver or resonator of various kinds of energy fields, i.e. electro-magnetic waves, cosmic rays, electrical discharges, gravitational waves, etc., surrounding our planet and which are in the air around and within the pyramid.

Inside the pyramid the received energies, interact with one another.

A pyramid also creates a spherical field like a 3D globe of harmonic vibrations – where the wave patterns are synchronous and rhythmic – around itself. Everything within that field will move towards the harmony. [1]

How does the pyramid create a spherical field of harmonic vibrations around itself?

The pyramid shape generates a spin field from its apex for electrons, meaning that they can move in an angular momentum, i.e. around their own axis. So, if moving or kinetic energy enters the pyramid at the top opening, this can be taken as the north pole of its magnetic field and as the pyramid emits energy from its middle, this can then be taken as the south pole of its magnetic field.

Once it entered into the pyramid, the energy bounces from the equal sides of its walls while the five angles of the pyramid project a beam of radiation towards the center where the energy is collected or pooled to form the “fire in the middle” (the word pyramid is translated as ‘fire in the middle’). These energies all combine in the center or King’s chamber area of, i.e. the Great Pyramid. The molecules or atoms in this area absorb these energies by resonance.

The corners are then, in effect, a type of nano-wave radiator. As the energy increases, the electron orbits start to expand; as more energy is absorbed, more expansion occurs and as the energy increases, there is an increase in circulation and finally we have a highly saturated energy atmosphere in the wave bands around 10 nm. These energies also radiate outwards from the corners of the pyramid. [2]

Pyramid energy is a life-giving force called bio-cosmic energy, which allows for the pyramid to become a kind of cosmic antenna that tunes into vast energy sources, receives the energy and changes itself into a magnetic field.

While most of the positive energy is focused within and beneath the pyramid, some is also diffused from the five points or angles. Many people who have stood on top of the Great Pyramid have described sensing a high energy field or electrical charge. 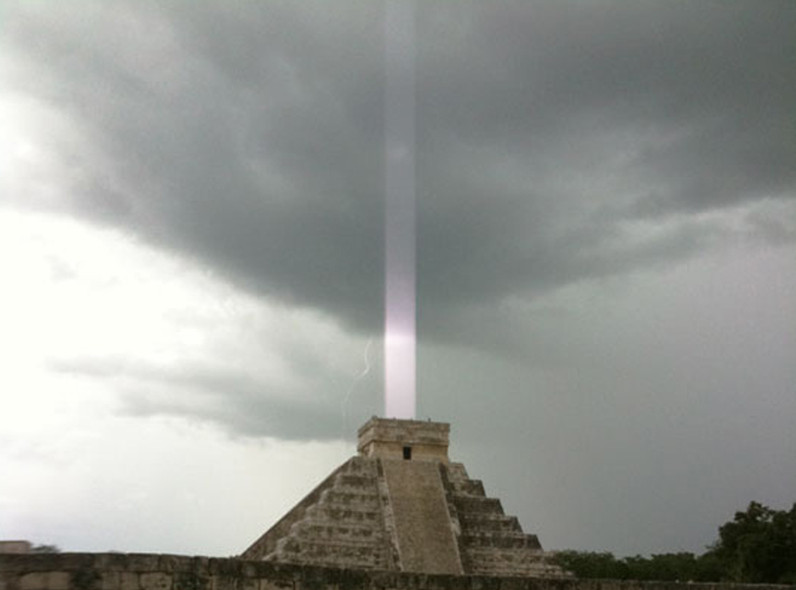 How does this occur?

Depending on the material it is built with, i.e. some kind of crystal or stone such as granite or marble, a pyramid will create a spherical field of harmonic vibrations around itself. Rose granite, which was used in the construction of the King’s Chamber of the Great Pyramid, is one of the most paramagnetic substances that has the ability to alter the magnetic field in the area it occupies.

Limestone, which covered the Great Pyramid on the outside, is a diamagnetic substance in that it is repelled by bothpoles of a magnet – being repelled then, the energy moves right through its walls to the outside.

According to Joe Parr, a member of the Great Pyramid of Giza Research Association, any pyramidal shape will theoretically attract and trap certain mass particles and it is these particles that produce the orb-like energy field, also called a containment bubble, around any true pyramid that shields out other energies.

It does so in order to cleanse the atmosphere outside around the structure enabling all other elements and vibrations to move towards the harmony and therefore making what is negative, positive. In this process, destructive energies are deflected and positive energies are enhanced.

Parr studied this energy field, which emanates from the one-third height level of the pyramid – the geometric center – he found that sun spot activity and the phases of the moon had an effect upon the intensity of a pyramid’s energy field and that at certain times of the year the field would block all electromagnetic radiation and even the force of gravity, which brought him to the conclusion that solar and lunar activity has a direct impact on the strength of dynamic torsion energy streaming into the earth:

– Pyramid energy weakens radiation consisting of waves of energy associated with electric and magnetic fields resulting from the acceleration of an electric charge, i.e. gamma rays. One of the aspects of the power of pyramids is that the atmospheric energy in and around a pyramid is contained in a spherical aetheric energy field centered at the 1/3 height level of the pyramid.

This energy field is called a third dimensional energy bubble that has been tested and measured by scientists and it was found that every now and then Pyramids quit responding to recordings and measurements.

Regarding this, a correlation was found that celestial events such as sun spot activity seemed to affect the intensity of the pyramid energy bubble: at certain times of the year the energy bubble would totally block not only the force of gravity but also nuclear and electromagnetic radiation.

Another effect of the influence of celestial events upon a pyramid’s energy bubble, was found in a pyramid’s seeming ability to relate in a harmonious way at 500 and 1000 Hz. This means that the force field around the pyramid become totally non-conductive to all known forces that are generally negative.

– Parr has also found that the width of the energy containment bubble or orb expands and contracts with the phases of the moon. This suggests again that the spherical orb on the outside of the pyramid is a static torsion field that gathers around the pyramid and is strengthened by absorbing other dynamic torsion fields.

These fields can be strengthened by the electrostatic energy in the ions or in the acoustic vibration of air, which also is a vibration of the ether. [3]

The best passive torsion generators are formed by cones or pyramidal shapes built according to the “phi” ratio of 1 to 0.618 and it can, therefore, be said the pyramid shape has the power to harness torsional energy because torsion waves are phi-spirals and for this reason a pyramid will hold positive energy and deflects negative energy wavelengths and therefore inhibit natural decay:

“Pyramids don’t kill bacteria. However the bacteria feed by absorbing nutrients as entropy breaks the tissues down. In a pyramid there is so little entropy that the bacteria barely survive and don’t multiply prolifically. Food therefore stays fresher longer and has a chance to dehydrate before it goes bad.”

Because aluminum blocks a pyramid’s energy field, seeds placed on aluminum foil in a pyramid will sprout slowly but aluminum’s blocking effect is overcome if the foil is left in a pyramid for two weeks or more. Amazingly, the foil then carries its own pyramid energy. [4] 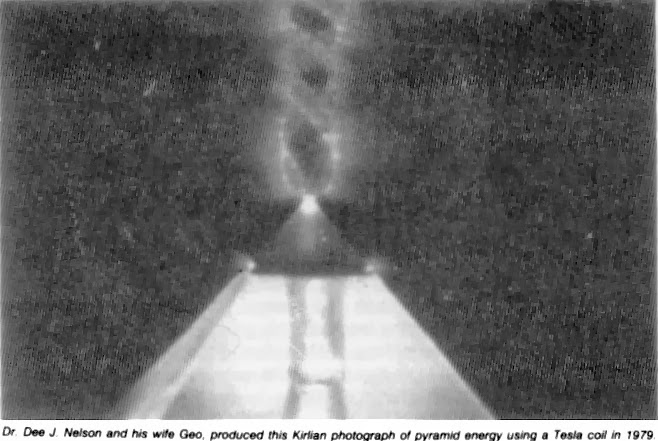 A cube-shape such as most houses people live in, inhibits energy while a pyramid-shape allows for a heightened energy field, which definitely is an aid for meditation. A pyramid aids meditation because it focuses harmonious energy while deflecting distracting energies, which are unordered, disharmonic energy.

By guarding against external interference, it helps you corral your own maverick thoughts by focusing positive energy within you, which is precisely your goal. As you enter your reflective state, the pyramid assists you at every step. Meditation is faster, deeper and more rewarding.

It has been reported that after spending time within a pyramid, people feel revitalized with sense-perceptions sharpened. Added to this, some people experience an internal tingling and sometimes a distant ringing sound, which is explained by the fact that the pyramidal shape focuses and resonates beneficial sound vibrations.

Through Kirlian photography, changes have been noted in the meditator’s aura, described as his/her electromagnetic field, such as the aura becoming brighter and larger.

Meditators reported deeper relaxation, an enhanced sense of well-being and increased levels of awareness – these conditions have been achieved due to the positive energy flow in the pyramid facilitating deeper focus. What happens is that their alpha waves became much stronger and meditation became deeper.

People sitting or sleeping near just a model pyramid, have reported the alleviation or disappearance of pain or symptoms of illness. [5]

Another pair of researchers postulates that the pyramid energy field tends to produce healthier functioning of cells, tissues and organs. People experience enhanced effects when meditating beneath pyramids, which can be attributed to the positive energy flow in the pyramid that facilitates deeper focus. [6]

The energy within a pyramid makes it a transmitter of universal light energy (also known as Source Energy, Ether and Zero Point Energy). As the inside of the pyramid transmits the inflowing energy it causes a higher dimensional field – a field that is the animating force behind all creation – and has the capacity to automatically transform lower vibrational (negative) energy into higher vibrational (positive) energy.

By the layering of organic and inorganic matter in the building blocks of the structure, the Life Force Energy are purified, condensed and then magnified, enabling it to transmit this energy to the outside where a spherical field of harmonic vibrations around the pyramidal structure is created.

This form of energy, orgone energy, is known by various cultures as Chi, Ki, Prana, Ether, or Life Force. By simply holding an Orgone device or being near one, negative energy will be cleared from your field creating a higher, more balanced and healthy state. Using your intent you can also direct this Source Energy towards personal healing, protection and spiritual awakening.

Anyone can use a pyramid model in the proportions of the Great Pyramid to conduct various experiments such as placing different organic matter inside the pyramid shape: razor blades are sharpened, organic matter undergoes dehydration, milk turns into smooth yogurt after six weeks, seeds germinate more easily while plant growth is accelerated and remains free of pests, by pyramid power.

Experiments have shown copper to be the best metal for an open-frame meditation pyramid, due to its natural electronic and bio-enhancing properties, but pyramid structures of cardboard, wood or bamboo are effective too,if built to the same proportional dimensions as the Great Pyramid.

If you want to build or make your own, the pyramid MUST be aligned to magnetic north to work! The energy is very weak when it is out of alignment, so you want to get it aligned as good as possible.

One particular observation made by Schul and Pettit, captured the difference in the growth rate of plants beneath pyramids with time-lapse photography. What their photography showed was “plants gyrating in a symphonic dance as though orchestrated by an unseen conductor.” Their first film showed a six-inch-tall sunflower placed in a glass pyramid at the one-third height level.

“The plant followed an east-west cyclic movement. It bowed to the east nearly touching the base, swept a semicircle to the south, back to the west and finally straightened to the vertical before starting the dance once more. The movement was repeated every two hours ….”

The authors observed this east-west movement for two years, then abruptly the plants started to move instead in a north-south arc, presumably due to some change in the environment or atmosphere. An aluminum screen placed to the west of the plants would stop the plants’ gyrations, since aluminum blocks a pyramid’s energy field.

Similarly, seeds placed on aluminum foil in a pyramid will sprout slowly – but aluminum’s blocking effect is overcome if the foil is left in a pyramid for two weeks or more. Amazingly, the foil then carries its own pyramid energy and it will enhance seed growth and cook food faster.

“Pyramids don’t kill bacteria. However the bacteria feed by absorbing nutrients as entropy breaks the tissues down. In a pyramid there is so little entropy that the bacteria barely survive and don’t multiply prolifically. Food therefore stays fresher longer and has a chance to dehydrate before it goes bad.” [7]