The Story Behind The Broken Menhir Of Er-Grah

The once standing stone of Er-Grah is one of the unsung wonders of the ancient world. It was the biggest megalith ever erected in history and was raised in France (Brittany) during the Neolithic, 4700 BCE. It is believed to have stood for 700 years before breaking into four pieces at around 4000 BCE.

The impressive dimensions of this menhir still divide specialists about the techniques used for transport and erection. This great megalith weighed 280 tonnes, which even the machines of today would find challenging to move and erect. The fact that this was achieved during the Neolithic makes it one of the most remarkable engineering feats of the ancient world. 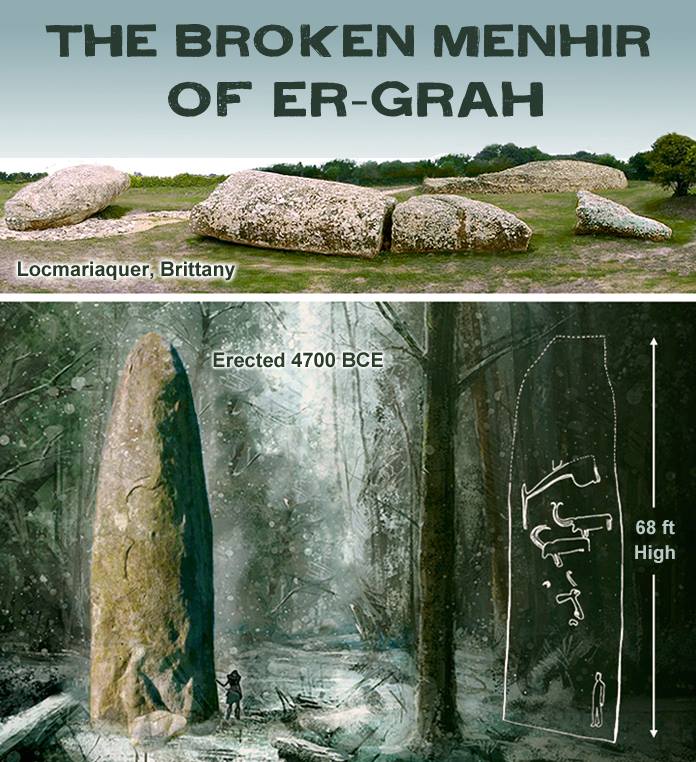 It is not known what caused the menhir to topple and break into the four pieces that are now seen. At one time it was believed that the stone had never stood upright, but archaeological findings have now proven that it did, dominating the landscape for all to see.

Etched into the surface of this great monument is a sculpture representing a hatchet-plow. It was quite common to find these petroglyphs (primitive symbols) marked onto the surface of ancient megaliths. Sadly, the original meaning of these symbols has been lost to the annals of time.

In my upcoming short stories, I’ll offer you an insight into what these megaliths were really used for. This was a world where standing stones created a sacred network, connecting the hearts and minds of our ancestors. The Great Menhir of Er-Grah was one of the most powerful of these artifacts, and I hope to reveal its secrets in the near future.