This Ancient Sumerian Cylinder Seal is said to depict 12...

There is an Ancient Sumerian Cylinder Seal, believed to be around 4,500 years old that curiously seems to depict our Sun and twelve planets within our Solar System, one of them supposedly being Nibiru, the elusive planet lurking somewhere on the outer edges of the Solar System. 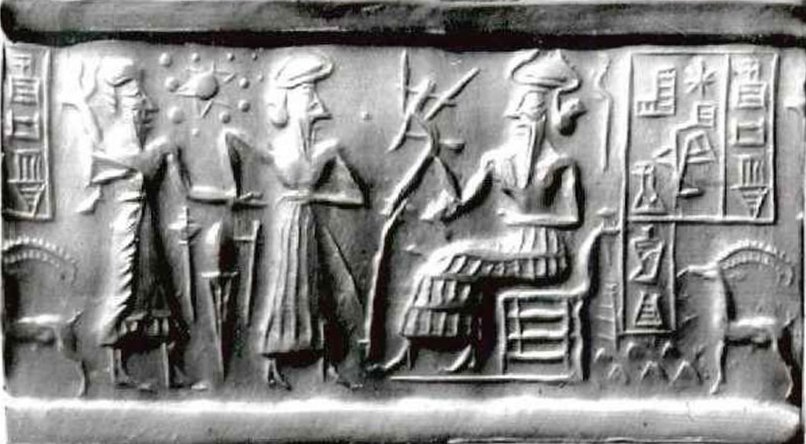 One of the most controversial seals ever discovered and discussed among scholars is dubbed VA/243 and seems to depict –accoridng to many—12 planets within our Solar System with the Sun at its center.

The Seal which dates back –at least- from the third millennium B.C. can be found at the State Museum in Easter Berlin and is cataloged as VA/243.

According to numerous researchers, this ancient Akkadian Cylinder Seal is one of the most ancient cylinder seals ever discovered and appears to be one of the most mysterious as well.

The reason? Well, it allegedly depicts the entire family of our Solar System and a rogue planet identified by authors such as Sitchin as Planet X, or Nibiru, home planet of the Ancient Anunnaki.

Zecharia Sitchin discusses the cylinder seal with great detail in his book the 12th Planet.

According to Sitchin, the cylinder seal undoubtedly depicts our solar system with the numerous heavenly bodies and their relative size.

There are nine planets we know of today, –if of course you still think Pluto should be a planet and not a dwarf planet— our moon, the Sun, and a rogue planet commonly referred to as Nibiru.

This interpretation by Sitchin has led towards a great number of criticisms and as Michael S. Heiser indicates, the symbol depicted on the cylinder seal Va/234 is not the sun but a star.

According to Heiser, the alleged planets identified by Sitchin are not planets but other stars.

Heiser further argues that there is no evidence whatsoever to suggest that the Sumerians had knowledge of more than five planets in our solar system.

1)  The inscription on the seal says nothing about astronomy, Nibiru, or planets.

2)  The alleged “sun” symbol on the seal is not the sun.  We know this for sure because it does not conform to the consistent depiction / symbology of the sun on hundreds of other cylinder seals, monuments, and pieces of Summer-Mesopotamian art.

3)  There is not a single text in any extant Summer-Mesopotamian text that says the Sumerians or Mesopotamians knew of more than five planets.  There are a number of cuneiform tablets that deal with astronomy, all of which have been compiled and published.  These sources are accessible to the reader but at varying levels of difficulty.

Now, this has made me think about both sides of the story, what Sitchin offers as an explanation and what a scholar like Michael S. Heiser has to say.

First of all, I am not saying that I believe any of them is correct in their interpretations, I am just forming my own little opinion.

The curious depictions on the Sumerian cylinder seal are fascinating. I find it extremely interesting that the creator of the seal decided to place a huge star (which resembles the sun) at the center, surrounded by other celestial bodies.

Even though Heiser argues that the star in the middle inst our star, but another star, I wonder why the creator of the seal did not depict the other stars (according to Heiser) just as he depicted the one in the middle?

Also, I wonder why the size of the star in the middle is represented as a larger body compared to the other celestial bodies.

Also, if all of the celestial bodies are stars as Heiser indicates, then why is the one in the middle depicted differently with characteristics eerily reminiscent of rays coming out of it?

Are these characteristics just another coincidence?

Or is it possible that we are missing something in this story?

However, if the mysterious objects depicted on the cylinder seal are in fact planets, how is it possible that the ancient Sumerians knew about our complete solar system in the 3rd millennium BC?

Not only that but how did they know their approximate size?

This leads to other questions like… where did the Sumerians obtain this knowledge from?

Did they develop it independently?

Or is it possible as many ancient cultures suggest, that some of that knowledge was passed on to them by ‘gods’ who came down from heaven and brought vast knowledge to man?

Does this ancient Sumerian Cylinder Seal depict the Solar System with all of its planets including Nibiru as Sitchin indicates?

Or is it possible that authors such as Michael S. Heiser are correct, and that the cylinder seal does not have any astronomical value and DOES NOT depict our solar system, planets, the moon, nor the sun?

There are other questions that must be raised when looking at the cylinder seal. For example, would a cylinder seal be the ‘appropriate’ medium by which someone —4,5000 years ago— would transmit such important astronomical knowledge?