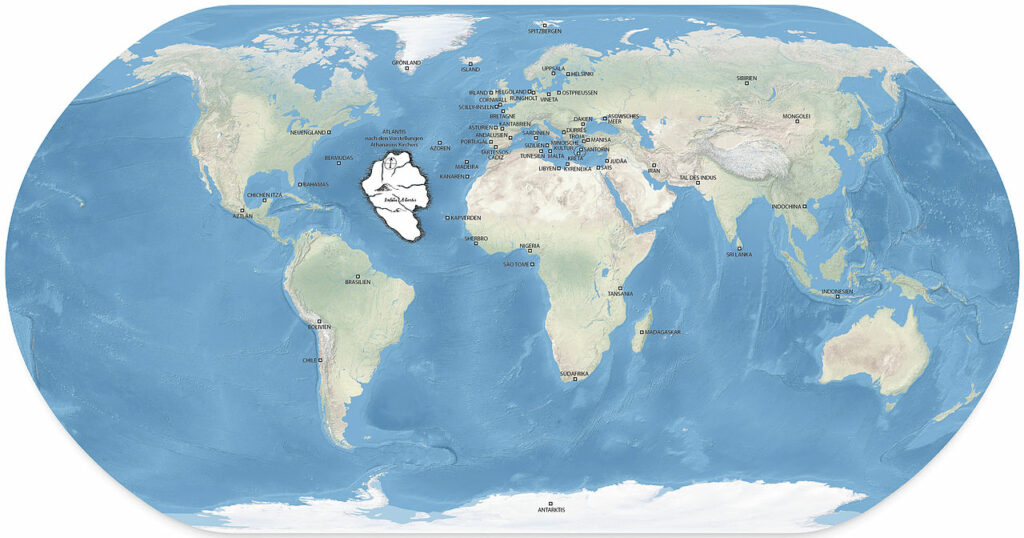 Lets say Atlantis did in fact exist thousands or hundreds of years ago, that Plato did not make up the story about the great Atlantean Civilization and that this continent-sized place existed somewhere on Earth. Atlantis has been deeply connected to adventurous journeys, travels to the unknown and great treasures. All of this has attracted Indiana Jones-type archaeologists to look for this ancient mythological civilization and while some claim to have found evidence of the existence of Atlantis, others are still looking for the ancient Atlantean civilization and their great capital city.

There are several places that are believed to be the place where Atlantis once existed, here are some of the proposed locations:

Thera is where most researchers believe Atlantis was once located, of course if you believe in the story of Platon. The theory that Atlantis existed in Thera was first proposed by Professor Angelos Galanopoulos in 1960. After scholars found out about the Minoan civilization, several individuals jumped to conclusions in the 1900’s connecting them to Plato’s Atlantis. In the recent years more archaeological evidence has linked the island of Santorini and expanded the connection with the Minoan connection. Scholars argue that rocks like the ones Plato described in his texts can be found on Santorini; “one kind of stone was white, another black, and a third red”. Researchers also have found evidence that the ancient Minoans possessed incredible engineering skills that enabled them the construction of three and four-story buildings with very good water piping systems, advanced air-flow management, and earthquake-resistant wood and masonry walls.

According to several researchers  the lost city of Atlantis might be located at the bottom in the eastern Mediterranean sea, specifically the Cyprus Basin. According to American architect Robert Sermast, sonar data obtained from the bottom of the Cryprus Basin has several features that resemble structures that according to him, are man made structures located at a depth of 1500 meters. He suggest that these structures are actually ancient buildings that were once, part of the mighty Atlantean civilization described by Plato.

European researchers believe this is the place where Plato’s Atlantis existed. According to German researchers Siegfried and Christian Schoppe the Pillar of Hercules that Plato described is the strait of Bosporus. They also claim that Oreichalcos were the obsidian stones used as a cash equivalent replaced with spondylus shell around 5500 BC, suiting the red, white and black explanation by Greek philosopher Plato. This area was flooded around 5000 BC, and researchers have even found remains of human habitats 300 feet underwater. The flood that occurred in this region is believed to have inspired the “Biblical flood” and story of Noah’s Ark.

This is another attractive region proposed to have been the place the mythical city-state of Atlantis existed. Numerous researchers support this theory. The lost city of “Tartessos” which vanished in the sixth century BC belongs to this region. Historians believe the Tartessians were very skilled traders known to Ancient Greeks. The Hypothesis of Atlantis existing in modern day Spain was first introduced by Juan de Mariana in the sixteenth century. According to this theory, the lost city of Atlantis was located between the islands; Mayor and Menor. More recent studies back this theory up. A German professor by the name Werner Wickboldt suggests that the war of the Atlanteans actually refers to the war of the sea People who attacked the Eastern Mediterranean countries in 1200 BC. He also proposes that the Ancient City of Tartessos was built upon the ruins of Atlantis.

Another interesting theory is that Atlantis was located at the group of Portuguese Islands that are located about 1500 kilometers of the coast of Portugal. Some even believe that the islands could be the mountain tops of Atlantis. An amateur sailor by the name of Diocletian Silva made an incredible discovery, apparently. He found a underwater pyramid, sixty meters tall between the islands of Sao Miguel and Tercira. According to preliminary research, the base of this underwater pyramid measures 8,000 square meters. The department of oceanography of Portugal doesn’t seem to give much credit to this discovery as a number of researchers have already disapproved this discovery. But who knows what the truth is about this Pyramid, maybe it will be a turning point for the search of atlantis at some point.

A submerged former island in the Strait of Gibraltar known as Spartel Bank has been proposed as the location of Atlantis by several authors. Researchers claim that during the most recent Glacial Maximum of the Ice Age sea level was 135 meters below its current level, narrowing the Gibraltar Strait and creating a small half-enclosed sea measuring 70 km by 20 km between the Mediterranean and Atlantic Ocean. According to writers the Spartel Bank formed an archipelago of smaller islands that fit the description of Plato’s Atlantis. The rising sea level caused the island to give in and sink eventually. Scholars also propose that a great earthquake and tsunami brought this islands to its knees. Collina-Girard proposes that the disappearance of this island was recorded in prehistoric Egyptian tradition for 5,000 years until it was written down by the first Egyptian scribes around 4000-3000 BC.

So, what do you think? Where is Atlantis? Is it maybe somewhere in the Americas? Antarctica or Asia as other authors have proposed? Or is there a possibility that Atlantis was just an invention, fictional land created by Plato to transmit his believes?

Atlantis, Location, Plato, Where is Atlantis?