Researchers in Mexico have made an unexpected discovery a couple of years back while excavating the burial site of “El Cementerio” located in the vicinity of Onavas.

During excavations, archeologists recovered 25 skulls, 13 of which had an alien-like shape, with features that did not resemble ‘ordinary humans.’

The pre-Hispanic cemetery was found in the northern Mexican State, and out of the 25 individuals that were excavated, 17 of them were minors without symptoms of a disease.

The strangest of the skeletons were the thirteen which had elongated skulls, our of which five had mutilated teeth. Experts participating in the discovery are not sure as to why or how the alien-like skulls were ‘modified’ or altered.

“Cranial deformation has been used by different civilizations around the world as a ritual practice, or even for distinction of status within a society or to differentiate between social groups,” said researcher Cristina García Moreno, an archaeologist at Arizona State University.

“However, the reason why these individuals discovered at El Cementerio deformed their skulls remains a mystery for us.” 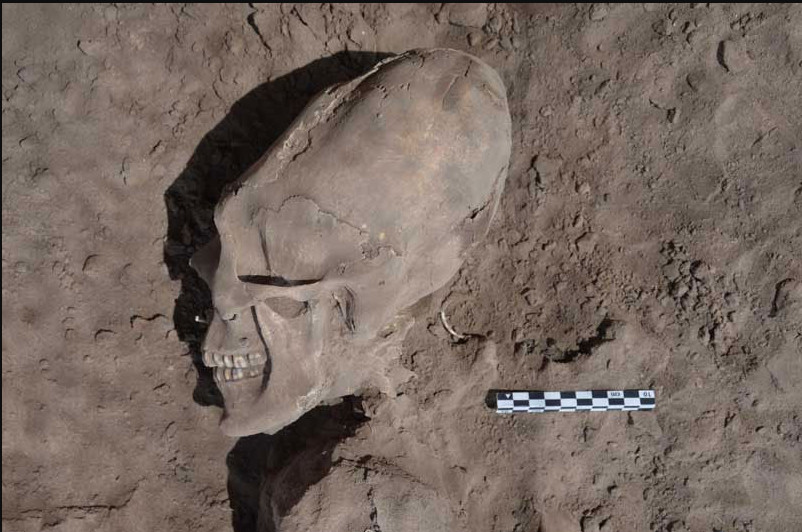 SI there an association to the mysterious Paracas Skulls?

An expert in the case, Brien Foerster talked about the enigmatic Paracas Skulls which allegedly show a species unknown to scientists.

Foerster continued that the skulls seem to have a cranial volume much larger than regular skulls.  In other words, 25 percent larger than typical skulls of human beings.

It is impossible to increase cranial volume through ‘cranial deformation.’

But that’s not the only thing that was strange. The Paracas skulls also weigh 60 percent more when compared to ordinary human skulls.

Forester doesn’t stop here as he noted several other differences.

According to Foerster, the skulls also feature 2 small holes found at the rear of the skull. These holes are perpendicular to the cranial suture located on the parietal plate.

Foerster continues explaining. Every normal human skull is composed out of three primary bone plates: the frontal plate, which ends at the upper part of the forehead and the two parietal plates which lie behind this, intersecting the frontal plate making a “T” shape.

You might be correct, but there is more to look into! Scientists learned that most of the skulls are elongated as a result of deliberate deformation.

A continuous force was implemented on the skull for a long time which caused them to form an elongated cranium.

But the mystery is beyond fascinating here.  Scientists found out that the volume and the weight of the skulls are not normal.

According to experts, upon close inspection, they found that the cranial volume of the “Paracas Skulls” is up to 25 percent larger and 60 percent heavier when compared to conventional human skulls.

The human skull is made out of 2 parietal bones located between the frontal and occipital, forming the sides of the calvaria. The calvaria or also called skullcap is made up of the superior portions of the frontal bone, occipital bone, and parietal bones. The “Paracas Skulls” only have one!

We aren’t looking at Aliens skulls here, although they may look alien-ish to some.

“The most common comment I’ve read from people that see the images of cranial deformation has been that they think that those people were ‘aliens,'” García added.

“I could say that some say that as a joke, but the interesting thing is that some do think so. Obviously, we are talking about human beings, not of aliens.”