There are certain Pre-Sumerian artifacts, recovered from the archaeological site of Al-Ubaid that offer incredible details about early cultures inhabiting Mesopotamia.

At Al-Ubaid, archeological missions have excavated a number of ancient artifacts including statues of what experts describe as humanoid figures with lizard-like characteristics.

These artifacts date back to the so-called Ubaid Period of Mesopotamia.

The Ubaid Period lasted from circa 6500 to 3800 BC, and its name derives from Tell al-‘Ubaid where the earliest large excavation of Ubaid period material was conducted.

The Ubaidian culture dates back between 4,000 and 5,500 BC, and just as with the ancient Sumerians, the origin of the Ubaid people remains a mystery to archaeologists.

We do know, however, that it was the Ubaid Culture which started building large unwalled settlements, mainly characterized by their multi-room rectangular mud houses. This culture is also credited appearance of the first temples of public architecture in Mesopotamia, with a growth of a two-tier settlement hierarchy of centralized large sites of more than 10 hectares surrounded by smaller village sites of less than 1 hectare. 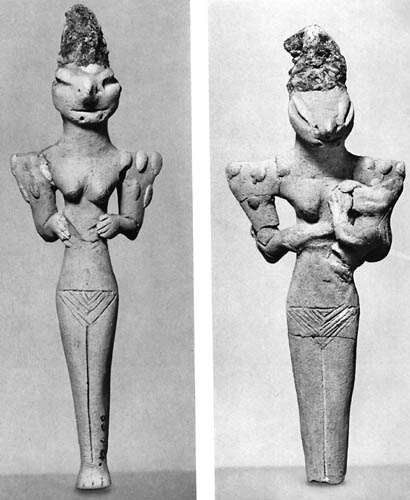 Quickly, large unwalled settlements developed into towns. Temples were erected, and people changed their way of life. New technologies emerged, and history began to be written down like never before.

Today, thousands of years after the first ancient cities came to life in ancient Mesopotamia, archaeologists are putting together an ancient puzzle which tells an amazing story.

Tell Al’Ubaid and the worship of Lizard-like beings

Ancient Mesopotamia is rich in history. The ancient people that lived there thousands of years ago left behind numerous clues that offer us a glimpse into the lives of early cultures.

At the archeological site of Tell Al’Ubaid, and at the ancient cities of Ur and Eridu, archaeologists recovered a set of mysterious figures that have challenged our understanding of ancient cultures.

More than 7,000 years ago, the ancient inhabitants of Mesopotamia worshiped Reptilian-like beings.

Tell Al’Ubaid was first excavated by Harry Reginald Hal in 1919 , as he and his team recovered various male and female figurines were in different postures. Follow-up up excavation performed in 1923, 1924 and 1937 respectively.

Archaeologists excavated a number of artifacts that helped understand this culture, but some items left archaeologists wondering.

Interestingly, scholars discovered that most of the figurines appear to be wearing a sort of helmet and have some kind of padding on the shoulders.

In addition to having excavated ancient figurines that resemble beings in spacesuits, archaeologists recovered various figurines of what appear to be female beings holding babies suckling milk. However, the being holding the baby is not human, but a reptile; A Lizard-like creature with humanoid characteristics.

Some of the figurines excavated in ancient Mesopotamia are represented with elongated heads, almond-shaped eye, and reptilian-like features.

What the ancient people of Mesopotamia wanted to represent with these figurines remains a mystery.

Archaeologists have been stunned by these discoveries, and no explanation has been given as to why the Ubaid culture made these strange looking figurines worshiping lizard-like creatures.

Whatever the ancient people of Mesopotamia wanted to convey with these figurines was surely important.

But reptilian beings were not only important for the ancient inhabitants of Mesopotamia. No matter where we look, we will find similar depictions.

Lizard-like creatures have been present in many cultures in ancient cultures, from Quetzalcoatl, Kukulkan, who were the Aztec and Mayan deities represented in the form of a snake, to ancient petroglyphs located worldwide depicting strange looking beings just like the lizard-like figures in the Ubaid Culture.

Were they merely decorative items? The result of imagination? Or did the Ubaid culture really see lizard-like beings walking among them?