“A strange, triangular craft surrounded by a hazy field hovered behind the open bay doors of the space shuttle while an alien being interacted with two NASA astronauts. It was a tall creature, about 8 to 9 feet tall. It had a humanoid body shape with two arms, two hands, two legs, two feet, a slim torso and a normal size head for its size.”

“The helmet was not as large as our two NASA Astronauts, and had a viewport to look forward.”

Millions of people around the globe have wonder whether or not our planet was visited by advanced alien beings. While many remain skeptical and conservative when it comes to alien life and visitations on Earth, millions are convinced that not only are we being visited by aliens today, we have been visited by different extraterrestrial races for millennia.

These so-called new-age beliefs have led to a revolutionary change in the scientific community who has come to accept the possibility that we might not be alone after all.

Director of Operations for Bigelow Aerospace, Mike Gold said it best when he stated that ‘our Universe is most likely teeming with intelligent extraterrestrial life.’

Interestingly, the change in mainstream science has led to top U.S. Astronomers testifying in front to f Congress that extraterrestrial life in the universe exists without question.

In fact, astronomers appeared in front of the Congressional House Science and Technology Committee for a hearing regarding the search for extraterrestrial intelligence where they said that alien life most certainly exists.

“In the last 50 years, evidence has steadily mounted that the components and conditions we believe necessary for life are common and perhaps ubiquitous in our galaxy. The possibility that life has arisen elsewhere, and perhaps evolved intelligence, is plausible and warrants scientific inquiry. If you extrapolate on the planets they discovered, there are a trillion planets in the galaxy. That’s a lot of places for life. We know the majority of stars have planets, but what fraction of stars have planets that are more like the earth? It might be one in five.”  – Dan Shostak

Interestingly, many other people including, astronomers, researchers, astronauts and government officials have been telling the world for years that we are not alone in the universe. No matter how skeptical you may be, it is impossible to think we are the only living species in the universe.

Roscoe Hillenkoetter, former head of the CIA was quoted saying: “Behind the scenes, high-ranking Air Force officers are soberly concerned about UFOs. But through official secrecy and ridicule, many citizens are led to believe the unknown flying objects are nonsense.” (source)

But lets not stray from the main subject of the article.

Clark C. McClelland is a former ScO of the Space Shuttle Fleet program who has testified that he PERSONALLY observed an 8 to 9-foot tall Alien being on his Monitor while he was on active duty at the Kennedy Space Center’s Launch Controls.

According to McClelland, the extraterrestrial being was standing upright in the Space Shuttle’s Payload Bay while –somehow—having a discussion with two tethered Astronauts.

McClelland also claims that the observed the Extraterrestrial Spacecraft as it entered orbit following the Space Shuttle.

How did it communicate? I have no idea. It did move its arms a lot. Almost like giving instructions! I heard no voice communications. The helmet was not as large as our two NASA Astronauts and had a viewport to look forward. It had a small, perhaps a communication device, attached only to the right side of the helmet! I saw no oxygen tank(s). It had a wide belt like wrapping around it… It did not appear to be tethered as the two Astronauts were to the sides of the shuttle structure. I observed nothing that appeared to be a weapon. The time of this amazing scene was one minute and seven seconds, I timed it on my Astronaut chronograph watch. (source) 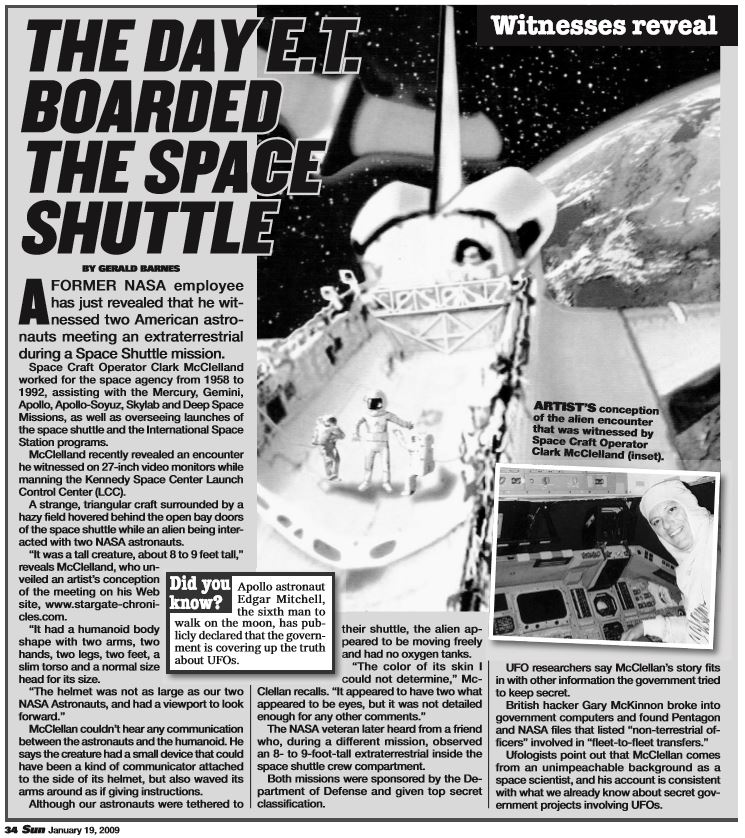 But did McClelland really work for NASA? The answer is yes.

On his website and on numerous other media sites you will find a sheer amount of images which lend great credibility to McClelland’s claims that he worked for NASA. In some of the images he is seen with Judy Resnick, The United States female astronaut. Other images show him at NASA working in uniform. On one image he is seen with David Leetsma ad Brian Duffy.

But even though there are a number of images showing McClelland at NASA with different astronauts, his work at NASA cannot be verified. According to McClelland, the United States government stripped him of his pension and removed all links connecting him to NASA after he spoke out about the incident involving 9-foot Aliens and Astronauts meeting in the Shuttle Bay.

Whether or not you believe i the statements made by McClelland isn’t important. The fact that similar accounts and stories have been told by numerous highly ranked government officials, astronauts and scientists is evidence enough –for many—that we are not the only intelligent species in the universe and that for millennia intelligent alien civilizations have been visiting us and continue to do so presently.

Yes there have been crashed craft, and bodies recovered … We are not alone and they have been coming here for a long time.” (source)

“I happen to be privileged enough to be in on the fact that we have been visited on this planet, and the UFO phenomenon is real, although it’s been covered up by our governments for quite a long time.” (source)