The Quimbaya figurines; What are they?

Do you believe in ancient cities made out of gold? Ancient civilizations that were capable of great construction projects with mysterious technology that allowed them to achieve incredible things which engineers today, with our technology, have a difficult time recreating? Well there are many treasure hunters who believe in the legendary City of Gold, El Dorado, Atlantis, etc… they believe that these ancient cities could have actually existed and that they are hidden somewhere under a thick canopy of trees.

The Quimbaya were a pre-colombian culture living in South America  from 300 to 1550 CE, they were well known for their incredible skills in very precise gold and metalwork. Among the figurines discovered, some models actually resemble what some believe to be, “flying machines”. Does this sound crazy? well for some it might, but the figurines created 2,000 years ago might actually be capable of achieving flight, (with a couple of alterations).

Even though cities like el Dorado and the city-continent of Atlantis have not been found, many incredible discoveries have been made in South America, specifically near the Magdalena River where artifacts dating back to 1500 years have been found. Among the artifacts, hundreds of relatively small golden figurines were found resembling fish, and insects while some of them may resemble animals in nature but are of mysterious shapes. Many claim that some of these figurines do not depict animals at all, but rather advanced technology, specifically airplanes. Does that sound a bit strange? Well yes it does when you think about the past and the people living 100-2000 years ago, everyone would go with the “animals”, “insects” theory, but what if there is something more to these figurines? 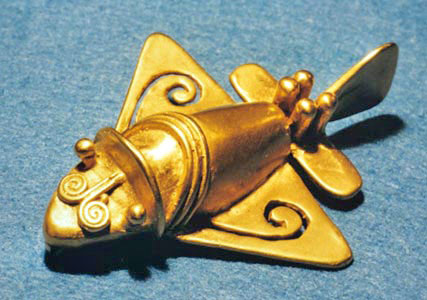 According to the Ancient Alien theory, the figurines found have almost nothing in common with anything similar found in nature, and the triangular shaped figurines might actually depict something like fighter planes, displaying stabilizers and a fuselage. Now, even though these little figurines that might resemble modern day airplanes to some, they can actually just depict fish, or other animals found in the Tolima region where the artifacts were found. Both possibilities are open. Those who firmly oppose the ancient Alien theory will not consider it, while others might consider there is a small chance that the ancient peoples of the Tolima might have depicted in gold, something rather unusual.

If you decide to exclude the possibility that the Tolima depicted insects or fish, you can connect the shape of the artifact to a aerodynamic object. In Germany aviation experts actually performed physical tests with the Tolima “gold plane”. They actually built a scale-model replica of the artifact and did a few changes, like adding an engine to the front, and removing the curls on the wings which would have made it difficult for the artifact to achieve flight. So whit a few modifications this 2,000 year old model did prove to be aerodynamic.

It is pretty amazing to think that a pre-colombian civilization had the skill to achieve a figurines that with only a couple of changes could actually achieve flight. These figurines might have not been designed 2,000 years ago to fly, but they could have been a depiction of what they saw, either in nature, as fish and insects, or perhaps something more extraordinary than that.

Essentially you have something incredible here, and we have to mention that most of the Quimbaya figurines are made up of a “tumbaga alloy” with 30% copper; something that some believe has to do with accounts of Plato and Atlantis, but that is another story on another time. Is this just a coincidence that the model replica of the “Quimbaya Airplanes” could actually fly? And that the display such incredible similarities to modern day objects? According to many, this isn’t a coincidence but proof that ancient man was extremely intelligent. The ancient people actually managed to create a model of a flying device 2000 years ago, that proved to be capable of flight today. Whether they depicted insects or something else, the figurines could achieve flight.