A Mindboggling link between the Pyramids and Alien Civilizations 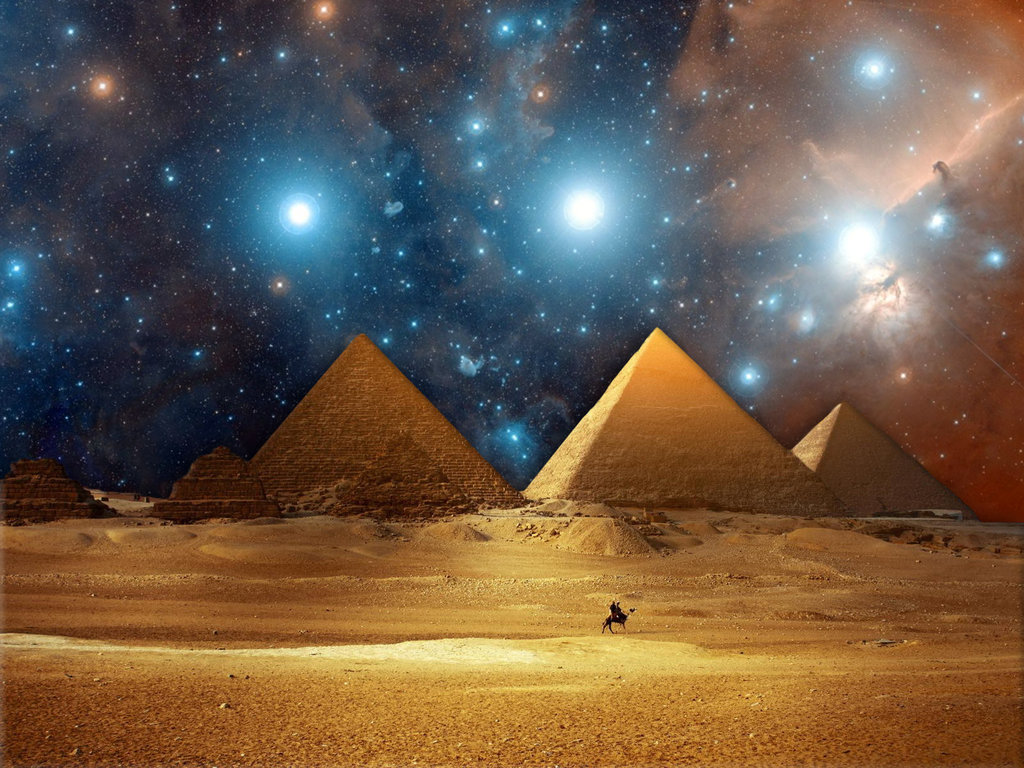 While many questions remain unanswered about the Great Pyramid of Giza, we still remain perplexed by the complexity and precision of this incredible ancient structure.

The majestic structures known as the Pyramids –specifically those located on the Giza Plateau in Egypt— are among the most fascinating standing structures on the surface of our planet. For centuries, researchers have discussed countless theories trying to explain why, and how these monumental stone structures came into existence. Today, not a single scholar has been able to answer three of the most important questions regarding the Pyramids at Giza: Who built them, why were they built and HOW were they built?

However, the explanation put forth by Herodotus seems impossible when you analyze it a bit. If what Herodotus said was true then it would mean that ONE block of stone had to be precisely placed into position ever 3 ½ minutes, 24 hours a day.

However, many people seem to ignore the fact that we are talking about a ludicrous amount of manpower which according to many wasn’t anywhere available during the 4th Dynasty of Egypt.

But even if that was SOMEHOW done, just how ere the massive blocks transported? And how were the stones placed as the Pyramid grew in height? Don’t forget that the Pyramid of Khufu, for example, is a 2.3-million-stone-block monument.

But let us analyze the Pyramid a bit more.

According to the most accepted versions in history, the Pyramids were erected in order to serve as eternal resting places for the Pharaohs, giant monuments that were constructed to preserve the bodies of the Kings and help them in their journey through the Afterlife. However, NOT ONE MUMMY has been discovered by scholars inside the Pyramid. This is one of the greatest misconceptions that has led to the formation of a number of misunderstandings about Ancient Egyptian society, their culture, and origins.

It is known for a fact that The Great Pyramid of Giza does not contain a Pharaoh’s mummy. In fact, nothing found inside the Pyramid points that there ever was one.

Interestingly, the only reason why mainstream scholars have wondered off and suggested that the Pyramid is a GIGANTIC tomb is thanks to Victorian inscriptions. Way back in history, when Colonel Howard, Vyse decided he wanted to become the most famous Egyptologist of all time, he visited the Pyramid and wanted to make a discovery that would blast him off into the History Books. During the time he spent in Egypt he was extremely disappointed at finding that everywhere he searched inside the Pyramid, nothing was there worthy to mention.

During the last season in Egypt, it is said that Colonel Vyse sneaked into the ‘air shafts’ located above the King’s Chamber and painted some hieroglyphs in Red Paint. The following morning, when he examined the Pyramid, he came across these ‘etchings’ earning him a place in history for discovering the identity of the owner of the Great Pyramid.

It is noteworthy to mention that at Giza, Colonel Vyse used gunpowder to force his way into a number of monuments including the burial chamber of the Pyramid of Menakaure.

The Stone Sarcophagus located within the Great Pyramid of Giza is way too large to have been brought inside from the outside. The granite coffer in the “King’s Chamber” is too big to fit through the passages and so it must have been put in place during construction. The coffer was made out of a block of solid granite.

This would have required bronze saws 8-9 ft. long set with teeth of sapphires. Hollowing out of the interior would require tubular drills of the same material applied with a tremendous vertical force. Microscopic analysis of the coffer reveals that it was made with a fixed point drill that used hard jewel bits and a drilling force of 2 tons.

Radioactive sand? Ummm yeah… Not long ago, former NASA consultant Richard Hoagland commented that there were traces of ‘RADIOACTIVE SAND’ found near the Queens chamber. According to many, this radioactive sand might have been the cause that led people like Napoleon to experience weird hallucinations. Also, this might help explain why the top of the Pyramid seems to be a 1000 year older than the bottom. 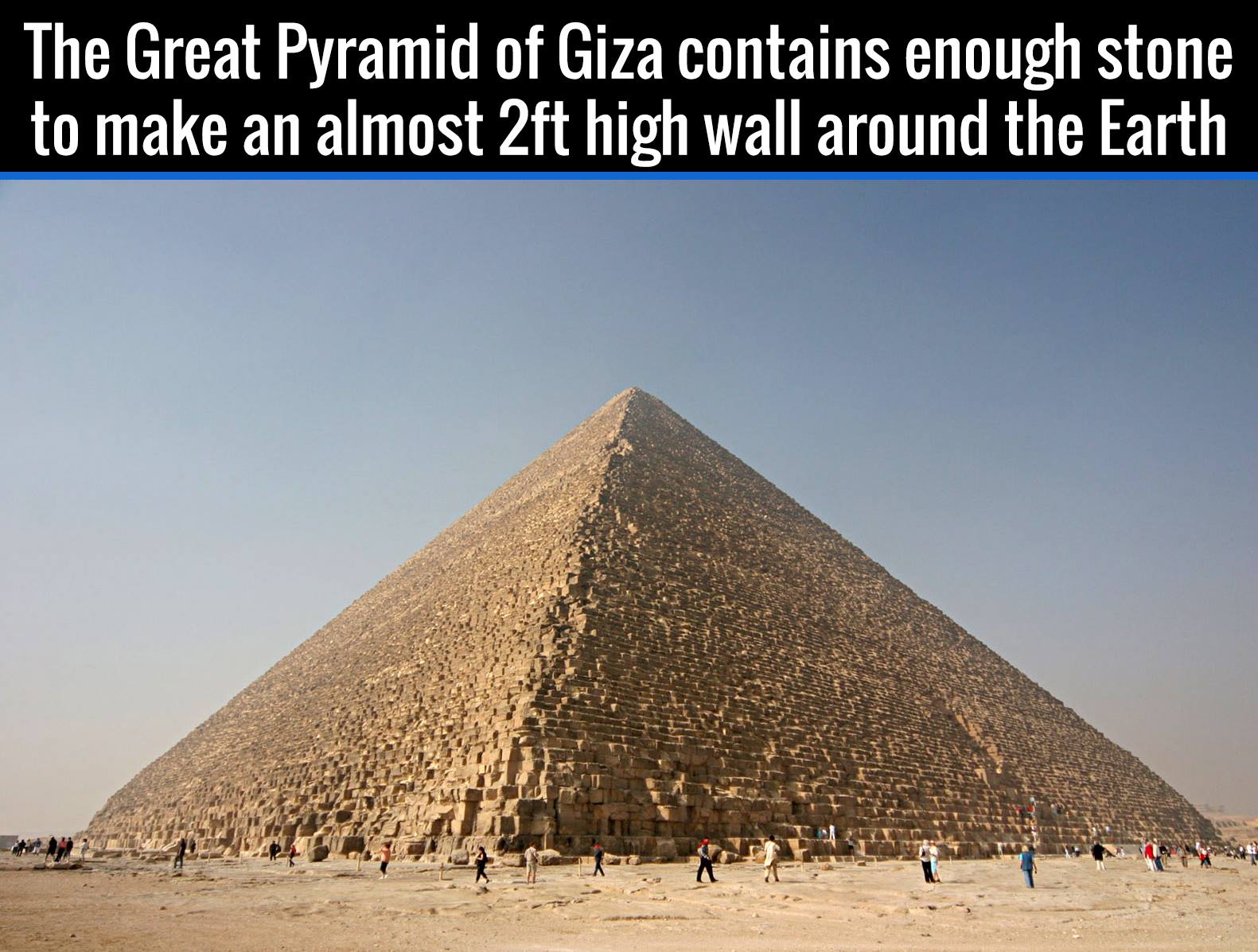 Another bewildering fact is that the Great Pyramid of Giza contains ENOUGH stone to make an almost 2-feet-high wall around the entire PLANET, and here is how:

The circumference of the earth is 40075km. Therefore, there are enough bricks of length 0.29m to cover this distance with a wall 17 bricks high.

The weight of the pyramid is estimated at 5,955,000 tons. Multiplied by 10^8 gives a reasonable estimate of the earth’s mass. Also, another bewildering fact is that the relationship between Pi (p) and Phi (F) is expressed in the fundamental proportions of the Great Pyramid.

This fact isn’t surprising if you realize that of all the ancient wonders of the world, only the Great Wall of China and the Great Pyramid of Giza remain standing.

However, there are more fascinating facts worth mentioning. Did you know that no one has ever discovered hieroglyphic markings inside the Pyramids? That’s a bit awkward for an ancient culture that built them which carved them into anything they could at the time.

But not only are hieroglyphs missing at the Pyramid, there aren’t other hieroglyphs anywhere else that mention HOW the pyramids were constructed. As Giza Pyramid investigator August Tornquist states: “The Great Pyramid was the largest single undertaking in the whole history of mankind. And yet there is not one picture or drawing, not one artifact, not one inventory or tally sheet to tell of its construction. The Egyptians left us some 3000 years of written and pictorial history covering virtually everything that happened in their culture. From babies being born to plowing and harvesting, building, weaving, sacrificing, praying, embalming… but nothing about the Pyramids of Giza. Why?”

Is it possible that the Great Pyramid predates the ancient Egyptian Civilization? What if there was a great civilization that existed on the Nile before the Ancient Egyptians? In fact, there is an ancient document discovered in the historical Library of Nineveh in Sumeria that the Great Pyramid was known to the ancient Sumerians some 10,000 years ago. This means that these ancient texts prove the Pyramid existed 6000 years before the first mortal Pharaoh of Egypt ruled the land.

But perhaps the most fascinating facts about the Great Pyramid are embedded into its construction.

The Great Pyramid of Giza was built to fact TRUE NORTH. But… How did the ancient builders achieve this precision thousands of years ago before even knowing what the Earth looked like? This fact raises numerous other questions like… from where did the ancient Egyptians obtain their advanced knowledge in mathematics, engineering, architecture, physics, and astronomy from?

Interestingly, it turns out that the Great Pyramid of Giza was placed at the EXACT center of our planet’s landmass. This means that the ancient builders of the Pyramid –SOMEHOW— managed to place the gigantic structure thousands of years ago, so that its East-Est axis corresponds to the longest land parallel across the planet, passing through the African, Asian and American Continents.

Also, it turns out that the longest land meridian on our planet going through Asia, Africa, Europe, and Antarctica goes straight through the Great Pyramid. But… How was this achieved at a time when the ability to compute longitude was not available.

Also, it turns out that the Great Pyramid of Giza is far more unique than anyone ever thought. The four faces of the pyramid are slightly concave, the only pyramid to have been built this way. The centers of the four sides are indented with an extraordinary degree of precision forming the only 8 sided pyramid; this effect is not visible from the ground or from a distance but only from the air, and then only under the proper lighting conditions. This phenomenon is only detectable from the air at dawn and sunset on the spring and autumn equinoxes when the sun casts shadows on the pyramid.

All of the above points to the fact that whoever built the pyramids thousands of years ago, had in their possession incredibly advanced knowledge and extremely advanced technology.

Geometrically speaking, the is a universal relationship between the diameter of a circle and its circumference. Now check this: The height of the Great Pyramids’ apex is   5,812.98″, according to calculations each side corresponds to 9,131″ from corner to corner. If we divide the circumference of the Great Pyramid by twice its height, we would obtain the number 3.14159 which shockingly corresponds to PI.

However, there are more bewildering facts integrated into the Great Pyramid.

Modern-day satellite and computers suggest the average height of land above sea level is  5,449″. Guess what the exact height of the Great Pyramid of Giza is? It is 5,449″.

As you can see, the Great Pyramid of Giza is without a doubt one of the most complex, intricate, mysterious bewildering, crazy and inexplicable constructions on the surface of the planet. All of the above mentioned facts have led to numerous speculations and theories about the Pyramid, its origin, and purpose, and is why many people are firmly convinced that however you look at the Pyramid, there is enough evidence to support the idea that thousands of years ago, advanced alien civilizations had something to do with the building process of the Great Pyramid. Millions of people around the globe claim that thousands of years ago, ancient people did not possess the knowledge needed to build the Pyramids.

It is as if the builders of the Great Pyramid incorporated into the structure an ancient code that researchers around the globe are slowly beginning to understand, indicating that the builders of the Great Pyramid knew the exact length of the years, the radius of curvature, advanced measuring techniques, the average height of land, the continents and center of land mass. All of this was achieved thousands of year ago somehow.

Who were the exact builders of the Pyramid? Where did the technology and knowledge originate from? Was it extraterrestrial? Or is it possible that prior to the rise of the Ancient Egyptian Civilization, a highly advanced culture inhabited modern-day Egypt and mysteriously disappeared from history books?

As always, you decide.

25 Facts about the Great Pyramid of Giza