25 Facts about the Great Pyramid of Giza

The Great Pyramid a true masterpiece and has rightly earned the title of a “Wonder”. It was built with such precision that our current technology cannot replicate it.  Historical analysis shows that the Pyramids were built between 2589 and 2504 BC. There are so many interesting facts about this Pyramid that it baffles archaeologists, scientists, astronomers, and tourists alike.

Here are the facts:

The interior temperature is constant and equals the average temperature of the earth, 20 Degrees Celsius (68 Degrees Fahrenheit).

The outer mantle was composed of 144,000 casing stones, all of them highly polished and flat to an accuracy of 1/100th of an inch, about 100 inches thick and weighing approx. 15 tons each.

The cornerstone foundations of the pyramid have ball and socket construction capable of dealing with heat expansion and earthquakes.

The mortar used is of an unknown origin (Yes, no explanation was given). It has been analyzed, and its chemical composition is known, but it can’t be reproduced. It is stronger than the stone and still holding up today.

It was originally covered with casing stones (made of highly polished limestone). These casing stones reflected the sun’s light and made the pyramid shine like a jewel. They are no longer present being used by Arabs to build mosques after an earthquake in the 14th century loosened many of them. It has been calculated that the original pyramid with its casing stones would act like gigantic mirrors and reflect light so powerful that it would be visible from the moon as a shining star on earth. Appropriately, the ancient Egyptians called the Great Pyramid “Ikhet“, meaning the “Glorious Light“.  How these blocks were transported and assembled into the pyramid is still a mystery. – http://www.gizapyramid.com/general.htm

Aligned True North: The Great Pyramid is the most accurately aligned structure in existence and faces true north with only 3/60th of a degree of error. The position of the North Pole moves over time and the pyramid was exactly aligned at one time. 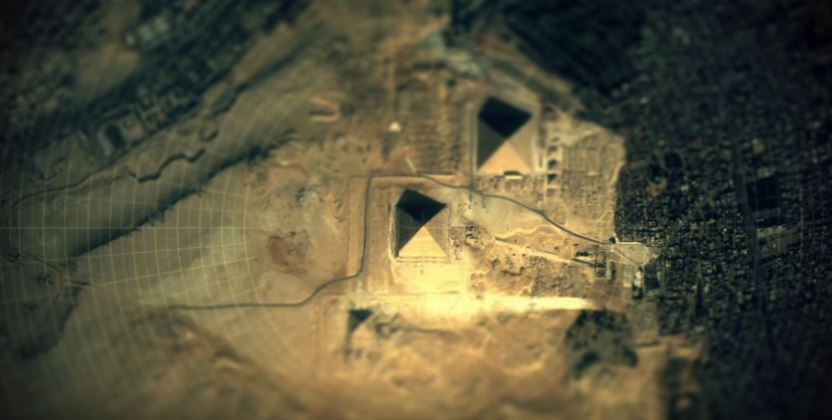 The centers of the four sides are indented with an extraordinary degree of precision forming the only 8 sided pyramid; this effect is not visible from the ground or from a distance but only from the air, and then only under the proper lighting conditions. This phenomenon is only detectable from the air at dawn and sunset on the spring and autumn equinoxes when the sun casts shadows on the pyramid.

The granite coffer in the “King’s Chamber” is too big to fit through the passages and so it must have been put in place during construction.

The coffer was made out of a block of solid granite. This would have required bronze saws 8-9 ft. long set of teeth of sapphires. Hollowing out of the interior would require tubular drills of the same material applied with a tremendous vertical force.

Microscopic analysis of the coffer reveals that it was made with a fixed point drill that used hard jewel bits and a drilling force of 2 tons.

The Great Pyramid had a swivel door entrance at one time. Swivel doors were found in only two other pyramids: Khufu’s father and grandfather, Sneferu and Huni, respectively.

It is reported that when the pyramid was first broken into that the swivel door, weighing some 20 tons, was so well balanced that it could be opened by pushing out from the inside with only minimal force, but when closed, was so perfect a fit that it could scarcely be detected and there was not enough crack or crevice around the edges to gain a grasp from the outside.

With the mantle in place, the Great Pyramid could be seen from the mountains of Israel and probably the moon as well.

The weight of the pyramid is estimated at 5,955,000 tons. Multiplied by 10^8 gives a reasonable estimate of the Earth’s mass.

The Descending Passage pointed to the pole star Alpha Draconis, circa 2170-2144 BCE. This was the North Star at that point in time. No other star has aligned with the passage since then.

The southern shaft in the King’s Chamber pointed to the star Al Nitak (Zeta Orionis) in the constellation Orion, circa 2450 BCE The Orion constellation was associated with the Egyptian god Osiris. No other star aligned with this shaft during that time in history.

The curvature designed into the faces of the pyramid exactly matches the radius of the earth.

Khufu’s pyramid, known as the great pyramid of Giza, is the oldest and largest, rising at 481 feet (146 meters). Archeologists say it was the tallest structure in the world for about 3, 800 years.

The relationship between Pi (p) and Phi (F) is expressed in the fundamental proportions of the Great Pyramid.

The Great Pyramid: A Miracle in Stone, 1973, Joseph A. Seiss