There are certain discoveries on planet Earth that cannot be explained by conventional thinking methods, and mainstream history has a problem with many findings that remain an enigma to experts. There are certain “out-of-place artifacts” that are considered to be nothing more but elaborated hoaxes by skeptics and other researchers, despite the fact that their existence could shatter our views of history and society.

One of these so-called OOPARTS were found in 1991 in Russia while researchers were performing geological surveys in the region of the Ural mountains when they came across hundreds of miniature coil-shaped objects, most of these objects were as small as 1/10,000th of an inch. The enigmatic miniature objects were discovered at a depth of around 12 meters are believed to date back 300,000 years. 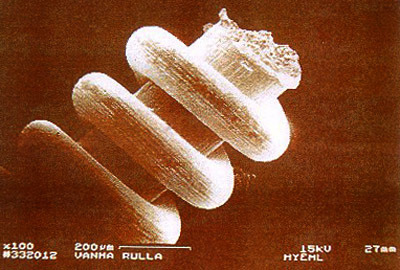 According to scientists, the shape of the mysterious artifacts suggests they are not naturally occurring objects, meaning they must have been manufactured. But who had the knowledge and technology to create something like this 300,00 years ago? The Russian Academy of sciences performed several tests on these mysterious objects and the results were quite interesting. Researchers found out that the largest pieces that were unearthed were made almost entirely out of copper and the smaller ones from tungsten and molybdenum.

According to reports, the largest of the objects is 2.87 centimeters in length while the smallest ones are only 2.5 microns in length, to give you an example of their size, the average human hair is approximately 100 microns wide.

The incredible finding from the Ural Mountains raises numerous questions that so far have remained unanswered. Who could have created these items in the distant past? Is it possible that they are the ultimate evidence on antediluvian civilizations on Earth? Ancient civilizations that had the technology and knowledge to create such elaborate artifacts. What is their purpose, and could they have been part of a much larger object that was once located in the area?

What if before written history, extremely advanced civilizations lived on planet Earth? Civilizations that had technology which was far superior to what we have today, a technology that would have allowed them to achieve incredible things like the enigmatic nanostructures from the Ural Mountains? Or is it possible that mankind has de-evolved through history?

Is it possible that the human species suffers from Amnesia?

What if human beings existed on planet Earth millions of years ago? And what if those ancient humans were much more advanced than we are today? Is it possible that we have de-evolved as a species through time? Both physically and technologically? And if so… wouldn’t we find evidence of that? Is it possible that these mysterious nanostructures are the ultimate evidence backing up the theory?