No, this is not an actual 250-million-year-old microchip 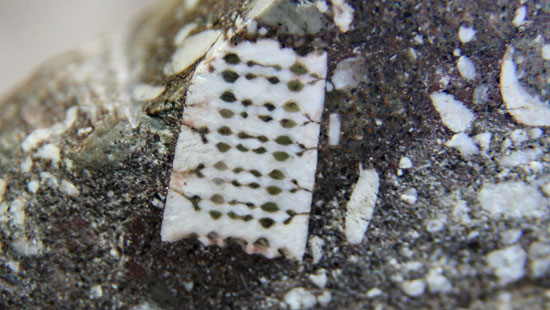 Short answer NO. While many people love the idea about ancient civilizations existing on Earth millions of years ago, this one simply put IS NOT. Not long ago we had written an article about a curious artifact that was discovered in Russia. Embedded into rock a curious ‘device’ which according to numerous websites resembled a modern day microchip created a buzz on social networks.

I have discussed over the last couple of weeks with a lot of people around the globe the ‘idea’ that mankind has existed on Earth far longer than we think. In one of those conversations the alleged 240-250-million-year-old microchip was mentioned. While many people believe this is the real deal, the truth is that it isn’t, as much as people want it to be.

The articles about the alleged microchip flooded the internet with many authors claiming that the ‘device’ was around 250 million years old.

This would mean that extremely advanced civilization’s lived on Earth hundreds of millions of years ago and the microchip was the ultimate evidence.

Many people rushed to false conclusions indicating that its the ultimate evidence of advanced civilizations on Earth. The truth, however, is not as many wanted it to be. While its possible that ancient civilizations were far more advanced then some scholars are willing to accept, this is simply put not one of them.

The alleged ‘microchip’ was found in Labinsk Russia and was even sent to the Platov South-Russian State Polytechnic University for analysis. The man who found the ‘microchip’ was a fisherman named Viktor Morozov who handed it over to the university after discovering it.

The result: Not a microchip. In fact, in 2014, the university released a statement to the Max Portal Russian news agency clarifying the reality behind the supposed microchip.

What many believed to be a 240-million-year-old microchip is in fact a sea lily fossil which dates back some 400 million years.

Due to the curious looks of the fossil, many people saw similarities with modern day microchips. Some even claimed to have identified letters written on the device.

Sea lilies belong to the family of crinoids. Sea lilies –in this case— are little creatures that became attached to the sea bottom.

While there may be different items round the globe that one way or another challenge mainstream history, this peculiar artifact is not one of them and it needs to be clear.

So, kick back and relax, we STILL have not uncovered a microchip that dates back millions of years, and the entire fuzz was created around a crinoid and not remnants of ancient civilizations.