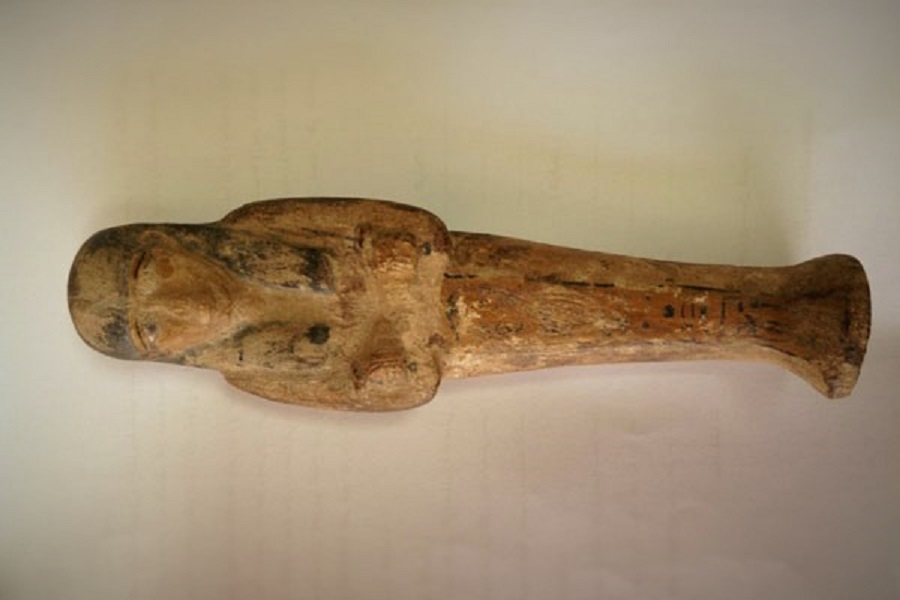 The ushabtis were funerary figurines used in Ancient Egypt, these statuettes were placed inside tombs together with other items and were intended to act as servants for the deceased, should he/she be called upon to do manual labor in the afterlife.

In an interview with popular website Ahram Online, Shabab Abdel-Gawad –from the Egyptian Antiquities Repatriation Department— said that the statuette was discovered by a Mexican national in his house.

Upon finding out the potential value and historical importance of the item, the statuette was handed over to the Egyptian Embassy in Mexico.

After arriving back to Egypt, the statuette was studied for over a week after which the Ministry of Antiquities confirmed the statuette to be an authentic ancient Egyptian artifact. An archaeological committee formed by curators and restorers from the Egyptian Museum in Tahir analyzed the item.

According to Abdel-Gawad, the out-of-place artifact dates back to the 19th dynasty.

Researchers concluded that the statuette is carved from wood and has hieroglyphic text covering its surface:

“The statuette is carved in wood and engraved with hieroglyphic text showing the deceased name ‘Ra-Nes’ and that “he was honest.”

According to Archaeology.org, Shabab Abdel-Gawad, head of Egypt’s Antiquities Repatriation Department “suggested that the artifact had been excavated illegally and smuggled out of the country.”

The statuette is was returned to Egypt at the Egyptian Museum in Tahrir where it was restored.

However, many people do not believe the item was actually smuggled out of Egypt and taken to Mexico.

Interestingly, there are many people who believe that thousands of years ago, Ancient Egyptian Explorers may have traveled as far As Australia, modern-day USA, and even Mexico.

There are numerous discoveries that seem to back up the theories.

As we reported in other articles, the ancient Egyptian ‘Ankh Cross’ has been found in Mexico.

Located in Calixtlahuaca, present-day Toluca, monument number 4, aka Cross Altar of Tzompantli is reminiscent of the Ankh Cross. What this ancient Egyptian symbol is doing in Mexico is a profound mystery that has prompted numerous ‘wild’ theories trying to explain how it got there and why it was placed there in the first place.

The Ankh also is known as the Key of Life was the ancient Egyptian hieroglyphic character that read “life.”

It actually represents the concept of eternal life, which is according to historians the general meaning of the symbol. It is one of the most important ancient Egyptian symbols yet one of the most mysterious ones because the origin of the symbol remains a mystery to Egyptologists even today and not a single hypothesis has been fully accepted.

More about the Ankh from 9 World Chronicles:

Interestingly, according to author Rich Cassaro:

“The Aztecs and the Egyptians were parallel civilizations in many ways, despite having evolved on opposite sides of the Atlantic Ocean. Both cultures built pyramids, both used solar symbolism, and both believed in life after death, preparing their dead for a journey to the afterlife via an elaborate and highly-ritualistic ceremony.”

In addition to the Ankh cross discovered in Mexico, an article written by the Arizona Gazette suggests that the Smithsonian Institute covered up a mind-boggling discovery in the Grand Canyons, where archaeologists discovered a treasure-trove of ancient Egyptian artifacts.

The report, which is shrouded in mystery reads:

Discoveries which almost conclusively prove that the race which inhabited this mysterious cavern, hewn in solid rock by human hands, was of oriental origin, possibly from Egypt, tracing back to Ramses. If their theories are borne out by the translation of the tablets engraved with hieroglyphics, the mystery of the prehistoric peoples of North America, their ancient arts, who they were and whence they came, will be solved. Egypt and the Nile, and Arizona and the Colorado will be linked by a historical chain running back to ages which staggers the wildest fancy of the fictionist.

More about this story from Beyond Science: