Ancient Texts: A massive underground world exists beneath the Pyramids...

Is there really an underground world beneath the Pyramids of Giza?

If we take a look at ancient texts written thousands of years ago, we find incredible details of a long-lost world hidden beneath our feet.

As if the Pyramids at the Giza plateau and the Sphinx weren’t fascinating enough on their own, there are numerous accounts of secret tunnels, passageways, and chambers located beneath the Giza plateau. Some of these chambers are said to date back more than 15,000 years.

It is a massive underground world, kept away from society, hidden from history books.

In fact, the entire region of Memphis (Giza) is said to be covered by underground chambers, and secret rooms.

Not far from Giza, at Fayum Oasis Herodotus once described the existence of an incredible Labyrinth which according to his writings was “an endless wonder to me.”

This ancient labyrinth was, according to Herodotus of impressive size, and contained up to 1500 rooms, and subterranean chambers which were back then already off limits.

This ancient structure left Herodotus awestruck, and he was compelled to write about it:

“…There I saw twelve palaces regularly disposed, which had communication with each other, interspersed with terraces and arranged around twelve halls. It is hard to believe they are the work of man, the walls are covered with carved figures, and each court is exquisitely built of white marble and surrounded by a colonnade. Near the corner where the labyrinth ends, there is a pyramid, two hundred and forty feet in height, with great carved figures of animals on it and an underground passage by which it can be entered. I was told very credibly that underground chambers and passages connected this pyramid with the pyramids at Memphis…”

Herodotus even wrote about a massive multi-level megalithic complex beneath the Pyramids at Giza, said to have been at least 15,000 old. Interestingly, quite a few authors supported Herodotus’ writing s about underground passages connecting major pyramids.

Iamblichus Chalcidensis, or Iamblichus of Apamea a  Syrian Neoplatonist philosopher, and the biographer of Pythagoras wrote about an entranceway through the body of the Sphinx into the Great Pyramid:

“…This entrance, obstructed in our day by sands and rubbish, may still be traced between the forelegs of the crouched colossus. It was formerly closed by a bronze gate whose secret spring could be operated only by the Magi. It was guarded by public respect, and a sort of religious fear maintained its inviolability better than armed protection would have done. In the belly of the Sphinx were cut out galleries leading to the subterranean part of the Great Pyramid.  These galleries were so art-fully crisscrossed along their course to the Pyramid that, in setting forth into the passage without a guide throughout this network, one ceasingly and inevitably returned to the starting point…”

The Giza plateau is well-known for a massive underground system that is composed of both manmade tunnels and chambers, as well as subterranean rivers and passages which have been mapped using ground penetrating radar since 1978.

Several historians have pondered about the size of these underground structures, and what they may represent. 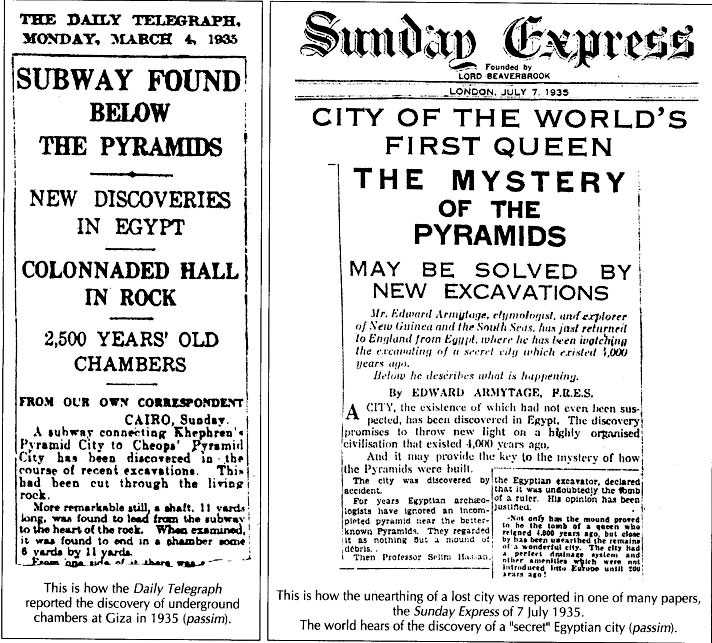 Some researchers claim that there are chambers beneath Giza larger than our largest cathedrals and that the legendary “City of the Gods”, may, in fact, be a massive structure located beneath the surface.

Further evidence of secret underground passageways can be found in a manuscript currently housed in the British Museum, written by Altelemsani, which details an extensive square underground passage built between the Great Pyramid and the Nile river, with a ‘strange thing’ blocking the Nile entrance.

“In the days of Ahmed Ben Touloun, a party entered the Great Pyramid through the tunnel and found in a side-chamber a goblet of glass of rare color and texture. As they were leaving, they missed one of the party and, upon returning to seek him, he came out to them naked and laughing said, “Do not follow or seek for me”, and then rushed back into the pyramid. His friends perceived that he was enchanted.

Upon learning about strange happenings under the Pyramid, Ahmed Ben Touloun expressed a desire to see the goblet of glass. During the examination, it was filled with water and weighed, then emptied and re-weighed. The historian wrote that it was “found to be of the same weight when empty as when full of water”.”

Furthermore, other writers such as Masoudi (10th century) wrote about fascinating ‘mechanical statues with amazing capabilities’ which stood as guards, preventing anyone from entering subterranean chambers located beneath the Great Pyramid.

These ‘robots’ from ancient times were supposedly programmed to destroy all “except those who by their conduct were worthy of admission”.

“…written accounts of Wisdom and acquirements in the different arts and sciences were hidden deep, that they might remain as records for the benefit of those who could afterward comprehend them.”

“…I have seen things that one does not describe for fear of making people doubt one’s intelligence… but still I have seen them…”—Masoudi, 10th century.