Experts have unearthed a mysterious statue belonging to the ancient Maya civilization. The curious artifact depicts ‘an alien humanoid’ holding a human head.

The statue consists of a snake that seems to surround the figure of a small ‘ALIEN humanoid’ seen in a profile view holding a human head. Notice the strange head and oval-shaped eyes. 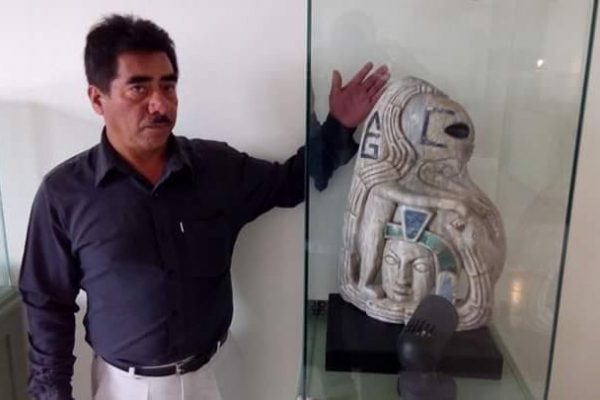 Directors of the museum of Xiutetelco—Puebla, Mexico— have revealed the discovery of an important archaeological piece belonging to the ancient Mayan culture, which inhabited the area sometimes during 400 AD. The ‘controversial statue consists of a snake that surrounds the figure of a small ‘ALIEN humanoid’ seen in a profile view, holding a human head. Notice the strange head and oval-shaped eyes.

The fascinating piece contains four inlays of mineral such as obsidian, turquoise, jade and shell, and was found by public workers in the Maxtaloyan community— in the upper part of the mentioned municipality—while improvement works were being carried out.

According to ‘El Sol de Puebla‘, the discovery is “a fundamental sample of the Mayan culture that for a long time inhabited the region, settling in the present day municipality, leaving important vestiges.”

Rafael Julián Montiel, in charge of the museum of Xiutetelco, said that since this area is adjacent to the archaeological zone of Cantona, among other communities, more pieces of this type could be found. In the near future—and especially during construction works—experts will monitor the area in hopes of discovering similar artifacts and preventing damage to possible future discoveries.

Likewise, the director of the museum added that Maxtaloyan is home to a volcano, similar to that of the community of ‘Los Humeros’ in the municipality of Chignautla, which has already erupted in the past, warning that there is danger of the volcano erupting and burying an entire pre-Hispanic settlement.

Monitel concluded:”At the moment, more than 5 thousand pieces have been discovered in several points of this municipality. All of them have been taken care of and are exhibited in the museum, which receives a large number of visitors who are eager to learn more about the ancestral wealth that Xiutetelco has.”

Experts have not yet concluded what exactly the newly discovered figurine represents, embodied in the ancient Mayan sculpture.

This has led to the emergence of several theories among those who have had a chance to see it in person.

Some people undoubtedly see a classic “gray” alien that holds a human head while others add that the serpent may symbolize an ancient “reptilian deity.”

Many would agree that the ancient statue clearly depicts a gray alien—with his elongated head, and oval shaped eyes.