Researchers have unearthed a bizarre, Alien-like elongated skull in Korea. Tests reveal that it was naturally formed and not the result of artificial cranial deformation. Interestingly, researchers also examined the mitochondrial DNA from the remains and concluded that the woman belonged to a rare lineage. 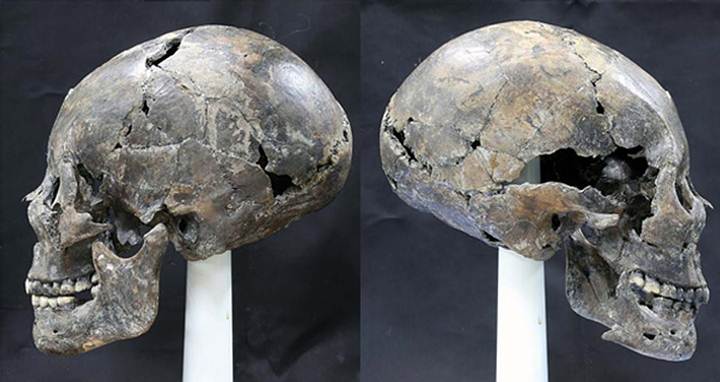 According to a cephalometric analysis, the cephalic index (CI) of the individual was 73.5, which suggests the dolichocephalic trait (long-headedness). This, as compared with similar demographic groups of the era, is unusual. (Source)

Archaeologists have unearthed an elongated skull in a tomb belonging to the Silla culture in South Korea. Experts say the remains show no evidence pointing to the ancient practice of artificial cranial deformation.

According to researchers, the skull belongs to a woman who was buried near the city of Gyeongju, a place that in ancient times was the historical capital of the Kingdom of Silla, one of the “Three Kingdoms of Korea” that existed between 57 B.C. and 935 A.D., along with Goguryeo and Baekje.

The remains of the woman, who was in her 30s at the time of death, were found in a mokgwakmyo, a traditional wooden coffin. The bones were relatively well preserved. Researchers discovered the skull fragmented into several pieces. Researchers had to collect the numerous pieces and put the skull back together. Upon completing the task, scientists were surprised to discover that the skull was abnormally long.

According to the study published in the Journal PLOS ONE: „The long and narrow cranium and narrower facial shape of the individual in this study should be regarded as an idiosyncratic characteristic of the skull and not a typical feature of East Asians in general or of Koreans in particular.“

„Two hypotheses are possible. The first is that the ancient Koreans living in the region during the Silla period had a narrower cranium than did people living contemporaneously in other regions, the second is that the head of this particular had been artificially narrowed in a cultural rite practiced at that time.“

The team of scientists examined the skull for signs of artificial cranial deformation, a practice by which the normal growth of the skull of a child is distorted as the skull is compressed between two wooden boards and bandaged with a cloth.

The apparent reason which led numerous ancient cultures towards this mysterious practice remains a mystery. But many researchers agree that artificial cranial deformation was practiced so the ancients would achieve a similar aesthetic look to the “gods” who possibly visited our ancestors in ancient times. Many researchers agree that such a visitation would have caused many ancient cultures to try and imitate elongated heads in an effort to look as similar as possible to these higher entities.

Eun Jin Woo, co-author of the study and anthropologist at Seoul National University, said that heads which are intentionally elongated often have flatter bones in the front, something not detected in this case which has led researchers to rule out the possibility that it was an artificial deformation.

“The skull in this study did not show the shape changes in deformed crania,” Woo told Live Science in an email.

“In this regard, we think her head should be considered as normal variation in the group,” added Woo.

Interestingly, researchers also examined the mitochondrial DNA from the remains and concluded that the woman belonged to a rare lineage. The analysis of carbon isotopes of the skeleton also revealed that the woman was a strict vegetarian, something consistent with Buddhist philosophies prevailing at that time in that region of the world.