National Geographic Documentary proclaims “Aliens exist on the moon” ahead...

As we prepare to celebrate the 50th anniversary of the Apollo 11 mission to the Moon, National Geographic will release documentaries to commemorate the occasion titled, “Apollo: Missions to the Moon.”

“As the world prepares to celebrate the 50th anniversary of the first manned lunar landing, Emmy and Peabody Award-winning filmmaker Tom Jennings uses his signature style of first-person storytelling to create an immersive account that spans the breadth and depth of NASA’s Apollo Space Program.”

This will be something to look forward to for sure.

See the trailer below:

In the meantime, another documentary claiming to be affiliated with National Geographic has been released with a shockingly certain title:

“Aliens Exist On The Moon.”

The video features photographs which it claims were taken by the Apollo astronauts themselves and asks the obvious questions: Why hasn’t NASA returned to the Moon in all these years? What did they find out?

What is hiding on the Dark Side of the Moon? After all these years, we’re only now seeing the pictures taken by the astronauts?

The narrator calmly asks for answers.

“…there are many mysteries about man’s first Lunar landing that remain unsolved. What did the astronauts actually encounter there and what made NASA stop going back to the Moon after Apollo 17? Is there evidence of an alien presence on the Moon and perhaps all around us?”

Looking at photographs, we see gigantic artificial-looking structures that seem to be clear signs of advanced alien life. They have never been shown on television before, the documentary claims.

In one of the photographs, we see an enormous cylinder standing inside a crater-like formation. It’s smooth perfect shape is nothing that could have been created by nature. In another shot, we see an enormous satellite dish, strange vehicle tracks, and objects that glaringly stand out. They are clearly artificial, unnatural in the lunar landscape.

In addition the photographs from NASA’s official archives, we see pictures taken by British videographer, John Lenard Walson. With a homemade telescope, Walson found what looks like a giant perfectly-formed cube on the Moon. Walson has found numerous strange-looking objects, including a fast-moving doughnut-shaped disc.

With #Apollo50 coming up this year, how can we preserve the lunar landing sites? – PAOhttps://t.co/clEVtDqVaM

In addition to focusing on the Moon, there are videos of strange orb-like objects which seem to be harnessing the power of the Sun. We see video taken by the Solar Dynamics Observatory. Instead of a typical solar flare, we see a dark object hovering over the Sun with a long dark pipe-like trail leading into the surface of the corona. Then it quickly moves away abruptly.

“I can’t explain what that is, but I can definitely see why aliens may be interested in taking plasma. A lot of these UFOs seem to be encircled with plasma-type energy,” says paranormal investigator, Joshua P. Warren. 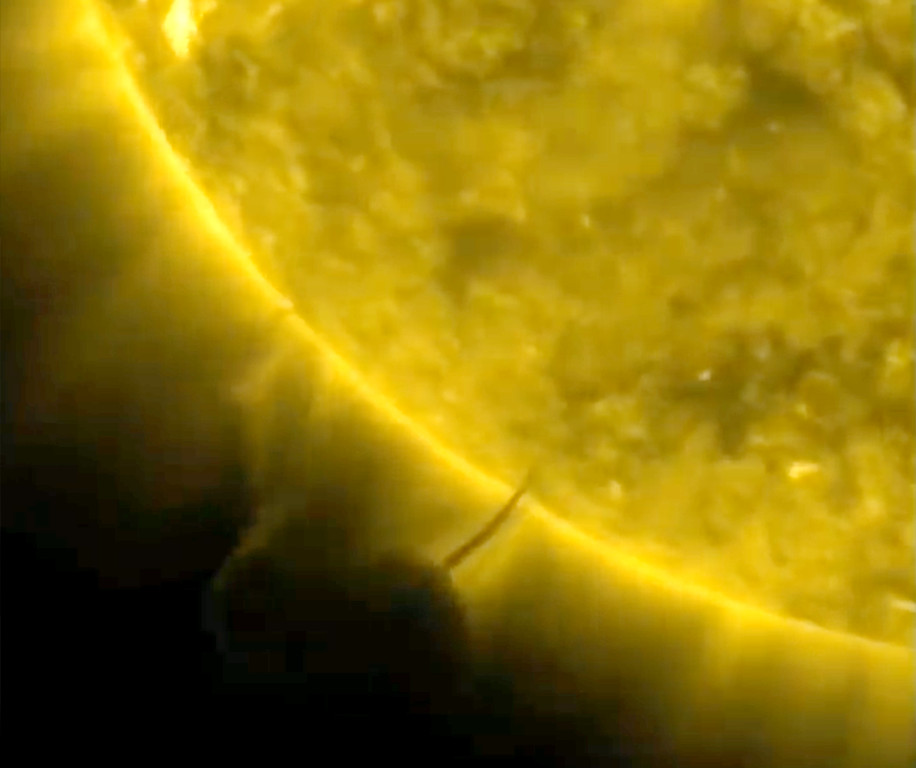 Lee Speigel, author for the Huffington Post, shares insight into what appears to be an alien space station or base found by ordinary means: the Google Moon app. Why was there a perfect triangular object on the surface of the Moon? The perfect spacing appears similar to a pyramid surrounded by light. Critics dismiss it as a digital artifact, but others say it appears to be a constructed installation.

“Is it an installation? We really don’t know other than the fact that it has these angles, has these bright lights, and it really does appear to be man-made in some form at least.”

In another spectacular image, a huge oddly-shaped structure captures imaginations all over the world. The object was discovered shortly after the launch of the Chinese Chang’e 2 Lunar Orbiter on October 1, 2010. Rather than just one structure, it seems to be made up of smaller ones, resembling what could be an entire complex or factory.

“It kind of looks like an aerial photograph of something along the lines of a North Pole installation or outpost,” says Redfern. “Clear angles, right angles, seeming to show something like an intelligently built structure. The question is: What is it? What’s it being used for?”

Although the image was thought to come from the Chinese probe, it was then discovered to originate from the NASA archives. There has never been a definite explanation for what the strange group of objects is.

As strange as all of these photographs are, one of the strangest is of the Mare Crisium region of the Moon. Mare Crisium is also known as the “Sea of Crises,” a lunar mare, or dark flat plain 345 miles in diameter. The Apollo Astronauts photographed a bizarre cylinder standing in a dish-shaped bowl, with another protruding tube-like object with a ball on the end jutting out of the landscape nearby.

The NASA photo was partly the basis for a book, “Somebody Else Is On The Moon” by George Leonard. The book was published in 1977.

“George H. Leonard, former NASA scientist, fought through the official veil of secrecy and studied thousands of NASA photographs, spoke candidly with dozens of NASA officials, and listened to hours and hours of astronauts’ tapes. ”

"Somebody Else Is On The Moon" by George H Leonard #aliens #moon #ufos pic.twitter.com/CcMAe28pRV

“Not only was this spar jutting out at apparently a 45-degree angle with a ball-appearing object on the very end of it; There have been estimates the structure could be as much as a mile in diameter and width,” says Ecker.

The area also has what has been described as a “castle wall” surrounding it. Speculation abounds about what this could possibly be, from a fortress to a nuclear power plant, to an alien military base.

Ecker goes on to discuss “the smoking gun” of activity on the Moon. The video goes on to encompass a wide variety of strange phenomena and evidence from around the solar system. With so many examples of bizarre and unexplained photographs, is it any wonder it appears that the government seems to have tried to keep any explanation a secret?

Have we finally reached a time when our civilization is ready to hear and accept the answers?

See the video below: