The 119 year old Buddhist monk who described his UFO... 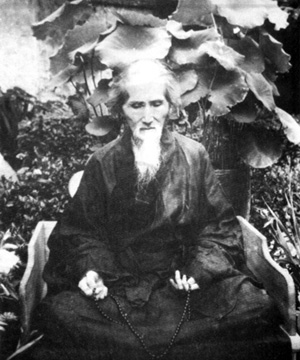 What do Buddhist monks have in common with UFO’s? well, nothing actually but an old Buddhist monk by the name of Hsu Yun also referred to as Xu-Yun, described his experience with a UFO (remember not necessarily alien).

He has been somewhat of a living legend and his life has aroused awe and inspiration around Chinese Buddhist and by the time he passed on to the next life, Hsu Yan was recognized as one of the most recognizable Han-Chinese Buddhists in the middle kingdom, he lived for 119 years. During his life, he was the author to numerous poems and writings. He is considered a Buddhist idol and has two orders named after him.

The great Xu-Yun (虛雲) was born in 1840 and he lived to witness the last five reigns of the Manchu Dynasty and its decline between 1910 and 1911. As the new order was formed in China, new leaders were less interested in Buddhism to the point that they considered it to be a medieval superstition that prevented China for progress in both social and economical ways and as in every other culture, traditional teachings and history were not compatible with the modernization era that was “raging” across China leaving monasteries and thousand-year-old traditions in ruins. All of this did not prevent Xu-Yun to rescue Chinese Buddhism from its dangerous decline and he even managed to revive and refresh it, founding and restoring temples, schools and even hospitals.

The story that involves the UFO story originates from an Autobiography of a famous Chan Buddhist of which Hsu Yun was an influential Buddhist master. The discovery about the mysterious account was discovered by Sanjin Đumišić, a Swedish writer, photographer, intermedia composer as he was reading the autobiography of the Chan Buddhist. In the pictorial biography/autobiography of Master Hsu-Yan, Sanjin discovered the account of Hsu-Yan and his visit to the Da-Luo peek in 1884 as he was on the way to pay respects to the “wisdom lamps” (source):

At the end of the Great Prayer Meeting, I climbed the Da-luo Peak, where I paid reverence to the ‘wisdom lamps’ said to appear there. I saw nothing the first night but on the second, I saw a great ball of light flying from the Northern to the Central Peak, where it came down, splitting a short while later into over ten balls of different sizes. The same night, I saw on the Central Peak three balls of light flying up and down in the air and on the Northern Peak, four balls of light which varied in size.

On the tenth day of the seventh month I paid reverence and offered thanks to Manjusri Bodhisattva and then descended the Mountain. From Huayan Peak I walked northwards and arrived at Da-ying, south of Hun-yuan, where I visited the Northern Peak of Mount Heng which I climbed by way of Hu-feng Pass. There, I saw a stone arch with the inscription, ‘The First Mountain of the Northern Regions’. When I arrived at the temple, I saw a flight of steps which was so high that it seemed to lead to heaven, and a forest of stone tablets and arches. I made an offering of incense and descended the mountain..

The same accounts can be found in the pictorial biography:

The Master bowed to the Wisdom Lamps on top of Ta Lo Mountain.

People often came to this spot to witness what fortune they might.

At first there was nothing unusual, but then they all appeared:

Large ones, small ones, and in between – each fireball was unique.

What this description might actually be referring to is hard to understand and imagine, they are an unusual account that has yet to repeat itself but on the peak where master Xu-Yun witnessed these mysterious fireballs a Buddhist monastery was constructed.