The 12 Goddesses Of Yoruba Mythology

The Yoruba people are based in Nigeria, Benin, and Togo. Their religion dates back to the Stone Age but was influenced by the spread of agriculture from the Middle East around 600 BCE.

Originally their gods represented the raw elements of nature, such as rivers, storms, and forests, but with the advent of farming, metallurgy and city building, the Yoruban gods took on a more anthropomorphic appearance.

The twelve goddesses described here are known as the Orisha (divine spirits) who are protective deities, often teaching their followers the secrets of the natural world. The Orisha are said to be manifestations of an all-powerful God, (a belief known as Pantheism). 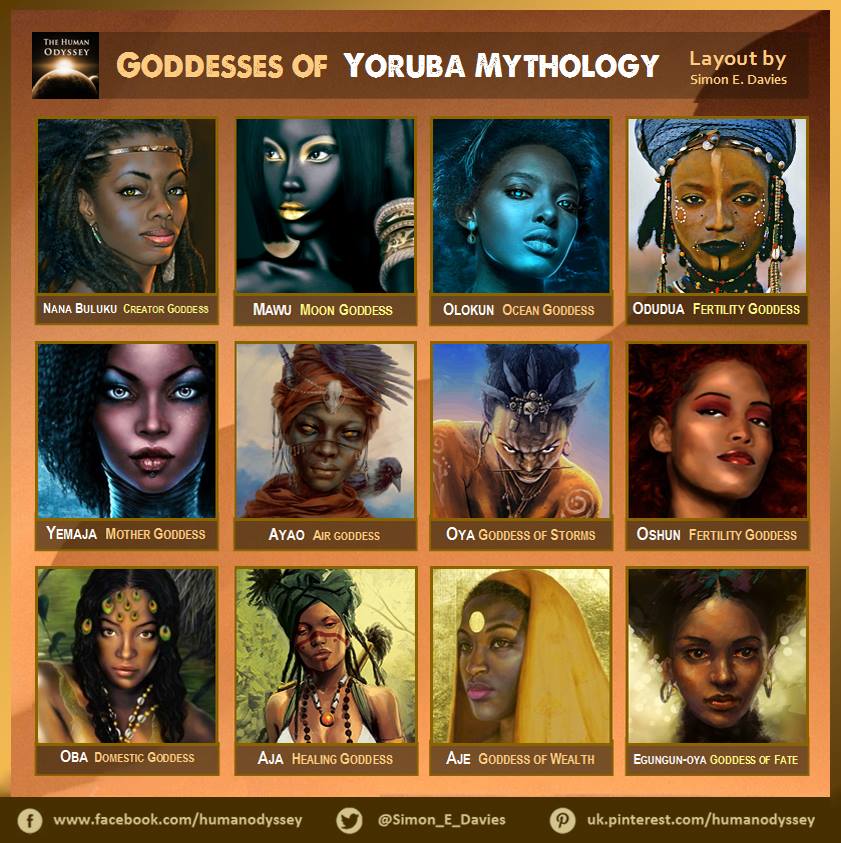 Nana Buluku is a Creator Goddess, great-grandmother of all the Yoruba pantheon. She is a patron of herbs and spell-craft. She used these magical tools to create the cosmos, including the human race. Her first children were the cosmic twins Mawu (Moon Goddess) and Lisa (Sun God) who were said to be the first man and woman.

Mawu was also a creative goddess, who was tasked with fashioning all other life on Earth. With the help of an Aido Hwedo, a primeval serpent, and Awe, a divine monkey, they shaped all the worlds living creatures out of clay.

Another daughter of Nana is Olokun, an ocean goddess. She possesses an unfathomable wisdom and governs over an esoteric world of dreams, psychism, meditation, and healing. She guides her followers between the world of the dead and the living, preserving the memories of their ancestors.

Olokun is the mother of Odudua, an ancient Earth Goddess, and battle maiden. She presides over womanhood, fertility, and life. As a guardian of the earth, she has been known to take the guise of a formidable warrior when necessary to protect those she loves. She is the mother of Yemaja.

Yemaja is a mother goddess, patron of pregnancy and children. She resides over the Ogun river, whose waters are said to cure infertility. Her son, Orungan, raped her when her guard was down, and in grief she exploded, her self-sacrifice creating fifteen Orishas. They include her daughters Ayao and Oya.

Ayao is an air goddess. She can manifest as a gentle breeze or in the eye of a raging tornado. She works closely with Osain and is a fierce warrior. Ayao has among her implements a crossbow with serpent arrows, a quill, and nine stones.

Oya is a storm goddess who wields fire and magic (which she stole from her husband, Shango). She can summon lightning and tornadoes be whirling her skirt in a dance. With her destructive qualities, she brings change to the cosmos, an important element of the balance of life. She is also a guardian to the underworld, helping people transition from the world of flesh to the realm of spirit.

Oshun is the goddess of love, intimacy, and marriage. She is kind and generous to her followers, but when brought to anger she can cause untold destruction. As Orisha of love, Oshun is represented as a beautiful, charming and coquettish young woman. In some tales, she is said to be a mermaid. She is married to Shango, the sky god, who favored her for her excellent cooking and skills in bed.

Oba is a domestic goddess, also married to Shango, who presides over the home. At a time when the Gods were starving, she offered him her ear to eat, and he scorned her. Grieving, her tears created the Oba river which intersects with the Oshun river. The rapids formed between these two rivers symbolize the rivalry between the two wives, a most turbulent relationship.

Aja is a patron of the forest and all the animals within it. She holds the secrets of botany and is a master of potions and healing herbs. She passed this skill to the Yoruban people, who practice her craft to this very day.

Aje is the goddess of wealth and prosperity. She often confers riches and good fortune on his followers. Her emblem is a large seashell which she uses as a currency. She is also the patron of dyes and colors.

Egungun-Oya is a goddess of divination. Her followers often hold festivals in her honor to commemorate the dead. These masquerades are performed twice a year, as well as during funeral rites. Her masquerades include the making of offerings as well as the honoring of ancestors in thanks for past and future aid.

The Orishas found their way into the New World via the Atlantic slave trade hundreds of years ago, and are now worshipped in many traditions such as Santeria, Umbanda, Candomblé, and has even the Vodou faith. The Orisha deities now enjoy a global following, flourishing in many parts of Africa, South America, and the Caribbean.

Ayao by Navate
Egungun-oya by Another Wanderer
Olokun by Lule Bel
Nana Buluku by Mshindo9
Oba by Marisol Machado
Aja by Chase Conley
(From Milton Davies’s novel ‘Woman of the Woods’).
Article by Simon E. Davies, contributor to Ancient Code.