Area 51 isn’t the only base filled with secrecy. As it turns out, there are countless underwater bases spread across different locations on our planet. 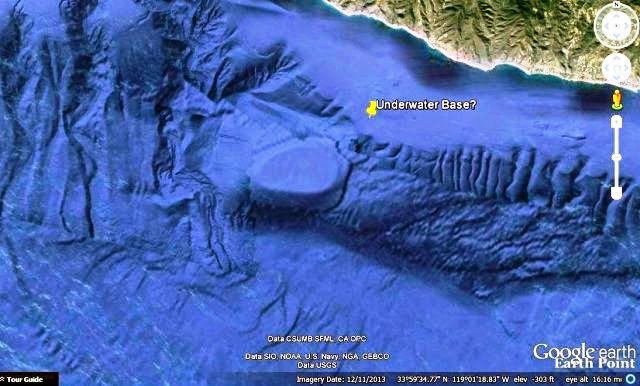 While many of us know about Area 51 and Dulce Base, the truth is there are more secret bases than you could ever imagine. Three years ago the CIA finally admitted the existence of Area 51, but many people around the world already knew about it and the mystery and secrecy behind it. Area 51 is just one of the many out there, but interestingly, most secret bases aren’t constructed on land, but deep under the oceans.

Creating underwater bases is probably much more efficient than creating them on land. For starters, it’s nearly impossible to find an underwater base, unless of course you know its location and have the equipment to get there.

Research into the feasibility of underwater bases began nearly 50 years ago. In 1968, the Stanford Research Institute alone discussed the construction of dozens of undersea bases across the globe.

The study entitled “Feasibility of Manned In-Botton Bases,” proposed a series of locations and plans to construct some of the most incredible underwater bases mankind had ever (not) seen.

According to a study written by T G Warfield and L R Parkinson, from the American Institute of Aeronautics and Astronautics. In 1968:

The construction of thirty manned in-bottom bases within the ocean floors is technically and economically feasible. However, it will be necessary to establish some successive types of experimental facilities before a full construction program can be started. This could take 15 years. The major technology for a land-linked station in bottom is established now; only adaptations are needed.

The remaining experimental phases will require further development of equipment and techniques applicable to remote sea access. There are useful assignments for a succession of three experimental stations other than advancing in-bottom construction techniques. Science and engineering concerned with the oceans and their resources will be furthered and military tests of undersea base functions complimenting deeper operations can be accomplished. The costs of the experimental phase, called here a demonstration program, can be surprisingly modest: approximately one-half billion dollars spent over 15 years.

Presently, establishing an in-bottom facility and building upon this will present fewer technical difficulties that do the submersibles which would support it and use it. Subsequent to the completion of the third phase of a demonstration program, which would be a remote, deepwater station, and the evaluation of it, a multiple base program, could be implemented.  The cost of such a base program would be about $2.7 billion for the construction of a number of bases (assumed at 30).

Reading the above-mentioned study does not only bring up numerous questions that make us wonder how many bases exist in oceans around the world today, but who operates them? Do they belong the governments? Or are they independent ‘research’ facilities?

interest in the creation of underwater bases continued after T G Warfield and L R Parkinson’s study in 1968. 19 years later, in 1987, Lloyd A. Duscha, the Deputy Director of Engineering and Construction for the U.S. Army Corps of Engineers spoke about the creation of such secret bases during an engineering conference called: “Underground Facilities for Defense – Experience and Lessons.” Lloyd Duscha made a very important statement:

After World War II, political and economic factors changed the underground construction picture and caused a renewed interest to “think underground.” As a result, of this interest, the Corps of Engineers became involved in the design and construction of some very complex and interesting military projects. Although the conference program indicates the topic to be “Underground Facilities for Defense – Experience and Lessons,” I must deviate a little because several of the most interesting facilities that have been designed and constructed by the Corps are classified. (Lloyd A. Duscha, “Underground Facilities for Defense – Experience and Lessons,” inTunneling and Underground Transport: Future Developments in Technology. Economics and Policy, ed. F.P. Davidson (New York: Elsevier Science Publishing Company, Inc., 1987, pp. 109-113.)

The truth is that we will perhaps never now what exactly lies underneath our oceans, but we can almost say with certainty that secret underwater bases exist, and are not something new, they have existed for years, and will continue to operate in the distant future.