12,000 Years Ago, A Mysterious Culture Built The First Temple...

Located 2,500 feet above sea level at the top of a mountain ridge in the Southeastern Anatolia Region of Turkey, some 15 kilometers (9 mi) northeast of the town of Şanlıurfa lie the breathtaking ruins of Göbekli Tepe; a Neolithic sanctuary built some 12,00 years ago by a mysterious people.

This ancient site was found by accident when an old Kurdish shepherd named Savak Yildiz discovered the ruins in October 1994. According got accounts, Savak Yildiz spotted something protruding from the ground, and as he brushed away the dust to expose the mystery object, he came across a large oblong-shaped stone. Little did he know that he had found a long-lost ancient sanctuary built thousands of years ago.

Later that year, news reached archaeologist Klaus Schmidt from the Deutsches Archäologisches Institut who traveled to the location and eventually inspected the site, soon realizing it was Neolithic in origin.

Some called the discovery of Göbekli Tepe as the discovery of the century. Now we know that this ancient site is around 12,000 years old, it was built by an unknown population and was most likely buried on purpose by its builders. Archaeological surveys have shown that the ancient site is around 7,000 years older than Mesopotamia’s Fertile Crescent, which has long been heralded as the cradle of civilization.

The age of Göbekli Tepe is of great importance. Archaeologists firmly believe it is several thousand years older than Stonehenge and The Great Pyramid of Giza.

To get an idea of its importance, if we take a look at biblical tradition, the world began in 4000 BC, yet here we have a monument that was built more than 12,000 years ago. This points not only to the fact that 12,00 years ago advanced civilizations existed on Earth, but they were also capable of erecting some of the most impressive structures on the surface of the planet. At Göbekli Tepe we have historic evidence that contradicts our normal understanding of the evolution of civilization and therefore mankind as we know it.

However, what is perhaps even more mind-bending is that after more than 20 years of excavations and research, archaeologists exploring the ancient site have failed to recover a single stone-cutting tool.

This makes you wonder, how can you create massive, 19-foot-tall, perfectly-sculpted columns that are up to 12,000 years old, and not find any evidence whatsoever of tools used to accomplish this?

The builders of Göbekli Tepe created a work of art in stone. At the site, we can find depictions of creatures like armadillos, wild boars, and geese, animals that are not indigenous to the region. 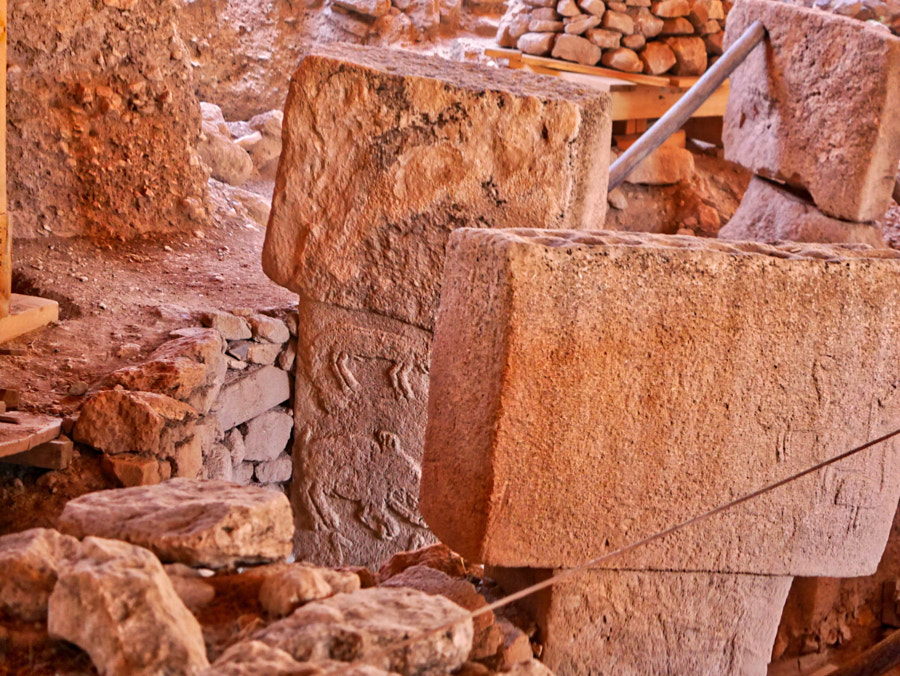 What is interesting is that located less than 350 Miles from Göbekli Tepe is the site many biblical scholars believe to be the resting place of Noah’s ark, so the animal carvings of Gobekli Tepe suggest a time in the region’s history when the indigenous animal population may have been of a different anthropological origin. We have to ask the question, could Göbekli Tepe and Noah’s ark be connected in a way?

After decades of exploration, we have learned very little about this archaeological site, and its builders. Despite the fact that progress has been made, we still do not know the answers to some of the most important questions like, who built Göbekli Tepe? To what purpose? And how was Göbekli Tepe preserved until today? Researchers point that Göbekli Tepe was “carefully” placed underneath the sand, as its builders made sure the whole site was buried. But… why would the builders bury such an incredible site? To protect it? To preserve it?

Why would ancient man build these massive structures around the world? Many of them are similar if not identical in design. Is there a connection? A pattern around the globe?

At present, Göbekli Tepe raises more questions for archaeology and prehistory than it answers. We do not know how a force large enough to construct, augment, and maintain such an abundant complex was mobilized and rewarded or fed in the conditions of pre-sedentary society.

We cannot “read” the pictograms, and do not know for certain what meaning the animal reliefs had for visitors to the site; the variety of fauna depicted, from lions and bears to birds and insects, makes any single explanation problematic.