6 reasons why Ancient Egypt is linked to Alien visitations

Who doesn’t love a bit of conspiracy now and there? The truth is that for decades mankind has linked Ancient Egypt—and their incredible achievements in numerous fields—to supernatural, or otherworldly entities. In this article, we take a look at 6 interesting reasons why many link Ancient Egypt to Aliens. 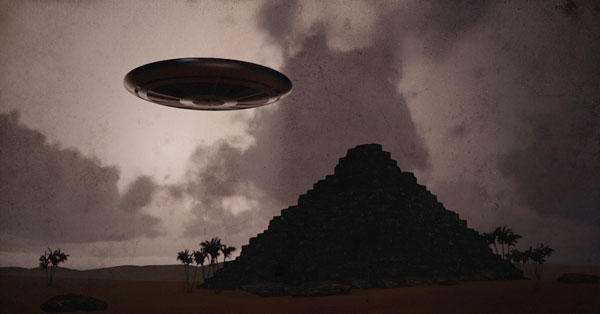 Every once in a while, when you talk about ancient Egypt, you can’t help and wonder how on Earth people managed to build the Pyramids—at Giza—without the use of technology like the wheel. How did they transport the massive blocks of stone, some of them weighing more than 50-60 tons, from quarry’s located more than 300 kilometers away, and then stack them into position, one by one, creating the Great Pyramid of Giza?

Mysteries like these is precisely why we look beyond the reasonable and wander off into subjects related to ancient alien visitations, where we try to research whether it is possible that thousands of years ago, ancient aliens visited Earth and helped ancient civilizations progress through time.

What if, there’s a slight chance that thousands of years ago, aliens DID visit Earth, and ancient civilizations across the world received knowledge and technologies far beyond what we have today?

Conspiracy? Probably, but what isn’t a conspiracy today, right?

Pyramids: The construction of the colossal ancient Egyptian pyramids continues to raise numerous questions for science. This fact is sufficient for many to believe that the buildings were erected with the help of extraterrestrial technology, or even by aliens.

While some would say we don’t credit our ancestors enough, the truth is that there are several enigmas related to the Pyramids of Giza and the Ancient Egyptian civilization in general. Mainstream scientists say The Great Pyramid was a tomb. However no mummies have been found, and there are no hieroglyphs detailing the purpose of the Pyramids, specifically the Great Pyramid of Giza.

Hieroglyphs: There are some really freaky hieroglyphs in ancient Egypt. Some of them depict figures that could be interpreted as flying vehicles, alien-like beings, and even giants. There are, however, several less fanciful explanations for such symbols. However, some of these hieroglyphs are enough evidence for many authors to suggest aliens had something to do with ancient Egypt.

Wondering off into Conspiracy Land. Sir William Petrie: Several authors maintain that English archaeologist Sir William Petrie kept in his private collection mummies of alien origin. Some even believe that these pieces are currently in a secret chamber of the Rockefeller Museum in Jerusalem. Yikes!

Electricity: It’s hard to even to imagine how the ancient Egyptians built their majestic pyramids, and temples without any advanced technology. Some have proposed that there might be evidence of advanced technology in ancient Egypt and that the civilizations ruled by countless Pharaohs had access to Electricity. Proponents of this theory point towards the Dendera Bulb— in the Hathor temple at the Dendera Temple complex—and the so-called Baghdad batteries.

Still not convinced? Well, let me introduce you to the Tulli Papyrus, an apocryphal document that allegedly describes the appearance of flying saucers during the rule of Pharaoh Thutmose III. While some blindly believe in the authenticity of the papyrus, others assert that the text is not real.