Is Cuicuilco The Oldest Pyramidal Structure On Earth?

As history goes on, we seem to forget the mysteries surrounding our past, civilization, and our origins.

Pyramids are present in every corner of the globe, we can find thousands of pyramids with different design and size, and there are thousands of undiscovered pyramids across the world, waiting to be discovered. We are very familiar with the Giza Plateau, and it pyramids, in Mexico, we have numerous pyramids predating the Aztecs and Maya and even in Asia, we have huge pyramids that challenge mainstream archaeology. But there are also other pyramids that are not so well-known, and one of them is the Cuicuilco pyramid.

This pyramid is located on the outskirts of Mexico City, and some researchers believe that this pyramid, is the oldest pyramid on the planet. Cuicuilco was discovered in the 1920’s by archaeologist Manuel Gamio by noticing a strange formation on a natural hill. In 1922 researchers from the University of Arizona, Byron Cummings, began excavations, removing a thick layer of lava and other material to discover a circular pyramid, spread over four levels and built with uncut stones on flattened clay. According to measurements, the Cuicuilco pyramid is around 18 meters high and measures 20 meters in diameter, while its original height is believed to have been around 27 meters.

The archaeological site of Cuicuilco is covered by a dense volcanic lava field known as “Pedregal de San Angel.” The lava field covers an area of approximately 80km2.

Researchers have also discovered a Stele near the pyramid of Cuicuilco, considered to be proof pointing to the connection between the builders of Cuicuilco and the Olmec civilization, believed to be the mother civilization of Mesoamerica.

Unlike other pyramids like the Egyptian, the question is not how it was built, but when. To answer this mystery, researchers took into account the lava which covered the pyramid, suggesting that the Pyramid of Cuicuilco must have been completed before the eruption which covered it with lava. According to scholars, this eruption occurred 8000 years ago, challenging known history once again, since the oldest known American pyramid is believed to be 2000 years old.

Taking in count the timeframe we are speaking of, according to mainstream archaeology, humans were not capable of creating such constructions 8000 years ago. 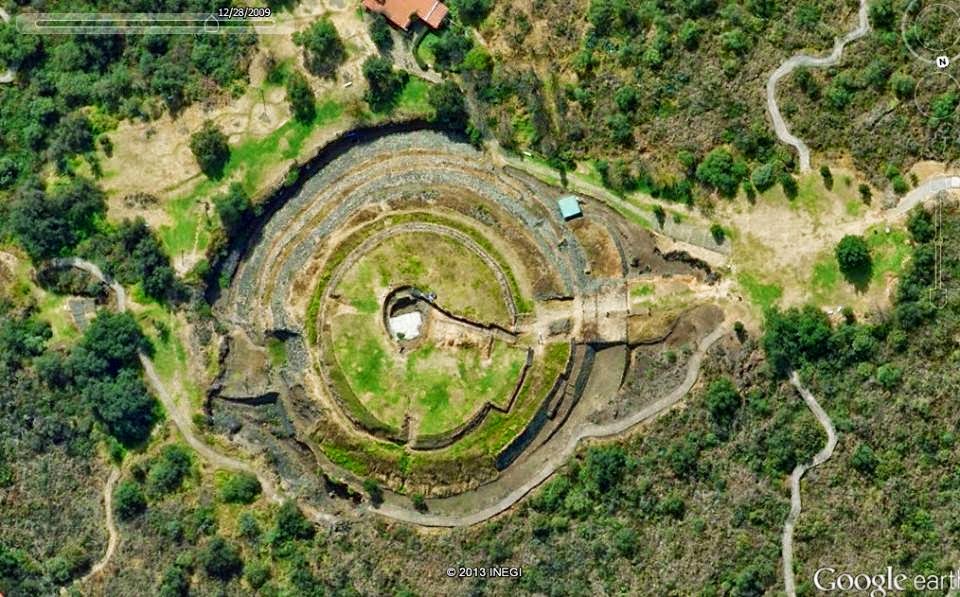 Because archaeology cannot understand this timeframe, researchers suggest that the construction of the pyramid could have taken place more recently, suggesting that Cuicuilco is not 8000 years old but rather 2100 years old. However, physical evidence found at the pyramid, like the thick layer of lava and the period when the eruption occurred, places the pyramid around 8000 years ago.

In 1924, numerous female figures carved in stone were discovered at the pyramid. Strangely, these figures are very similar to those found in Europe dating back to the Paleolithic period. Among the figures, researchers have found mysterious looking sculptures depicting beings with helmets and strange-looking suits, resembling modern-day diving suits.

How much would the pyramid of Cuicuilco influence our understanding of history? Is it possible that humans existed on Earth thousands of years before mainstream scholars suggest? And that these ancient humans were technologically advanced? And not as primitive as some researchers suggest?

The fact that the pyramid of Cuicuilco is around 8000 years old suggests that the original pyramid builders could have originated from the American Continent, expanding later in history to other lands.

Currently, the pyramid of Cuicuilco is not being researched, no matter how old or how important the discovery might be for history, scholars have decided to abandon research on the pyramid and its people. Perhaps researchers are afraid that, what they might find, could abruptly change history in many ways.